Haig Kazazian on ‘Jumping Genes’ and Their Relation to Genetic Disease

Haig Kazazian on ‘Jumping Genes’ and Their Relation to Genetic Disease

Haig Kazazian is a professor of pediatrics and molecular biology and genetics. He investigates how retrotransposons (“jumping genes”) can cause disease in humans. His current research uses next generation DNA sequencing to investigate the role of LINE-1 (L1) genes in human diseases, such as cancer. On Oct. 23, 2017, Kazazian joined Reddit's Ask Me Anything and answered questions about his research.

What are “jumping genes”?

Kazazian: Jumping genes, known as retrotransposons, are pieces of DNA that can move anywhere in the genome through a “copy and paste” method. These uncommon genes account for about one in every 250 mutations and can cause any disease that develops from just a single gene defect. Jumping genes have been around long before humans — about 500 million years — and are present in other species, including bacteria. To date, there are about 150 known disease cases, including a few cancer driver mutations, caused by retrotransposons.

Do jumping genes occur in the same locations for everyone?

Kazazian: Humans have about 1,000 retrotransposons specific to humans, but most of them are inactive. In other words, they can no longer “jump.” Many of these jumping genes are in the same place in everyone’s genetic code. However, others of these jumping genes are present in only a subset of the human population — we call them polymorphic. You probably have a different set of polymorphic transposons than I do; thus, your active jumping genes will be at a different genomic location than mine. Any two individuals in the population will have roughly 300 differences in the genomic locations of their jumping genes.

Why did you become a scientist and why did you decide to study retrotransposons?

Kazazian:I went to medical school and trained in pediatrics because I really liked kids. My first research experience was in a biochemistry lab at Dartmouth Medical School, but I became interested in genetics after taking a seminar class at Johns Hopkins. I really enjoyed the subject matter, so after I finished my pediatric training, I began studying genetics. My first genetic research subject was fruit flies. Later in my career, I studied large gene mutations in 240 patients with hemophilia. Two of the patients had disease caused by L1 insertions, a type of transposon, which is how I got into “jumping gene” research. I was 50 years old when my lab found the first mobile DNA insertion in a human being, and that is when I decided to shift my lab work to mobile DNA (jumping genes). I have always enjoyed solving puzzles, so I found it intriguing that pieces of our DNA can be copied and pasted to another area in the genome. 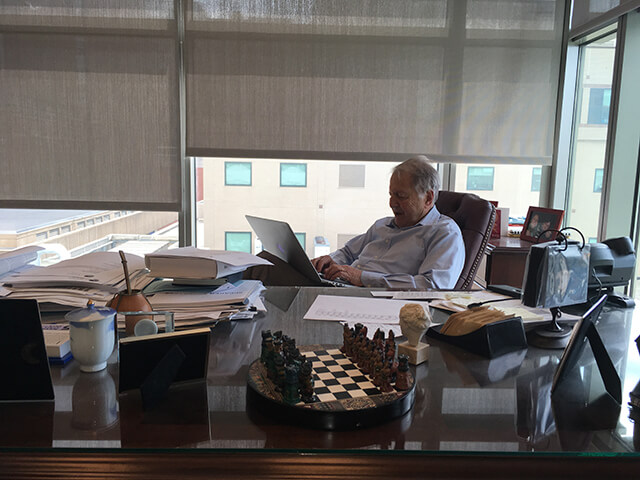 Haig Kazazian in his office answering questions during his Reddit AMA session.

What advice do you have for medical students and postdocs beginning their research careers?

Kazazian: First, it is important to have a good mentor, especially for a postdoc. I think it is even more important to work on something that really excites you. When we found that first mobile DNA insertion in a human being it took me about one second to decide that I was going to shift my lab to work on mobile DNA. I found it very exciting that pieces of our DNA could be copied and pasted into a new genomic site. So find something that really interests you and then work hard to contribute to the science.

Do you have any fun facts about your work?

Kazazian: In 1999, my colleague Arupa Ganguly and I became the first plaintiffs in the 2013 Supreme Court ruling that companies cannot patent parts of naturally occurring human genes. The case developed after we received a cease and desist order for studying the BRCA1 and BRCA2 genes for which a genetics company held a patent.