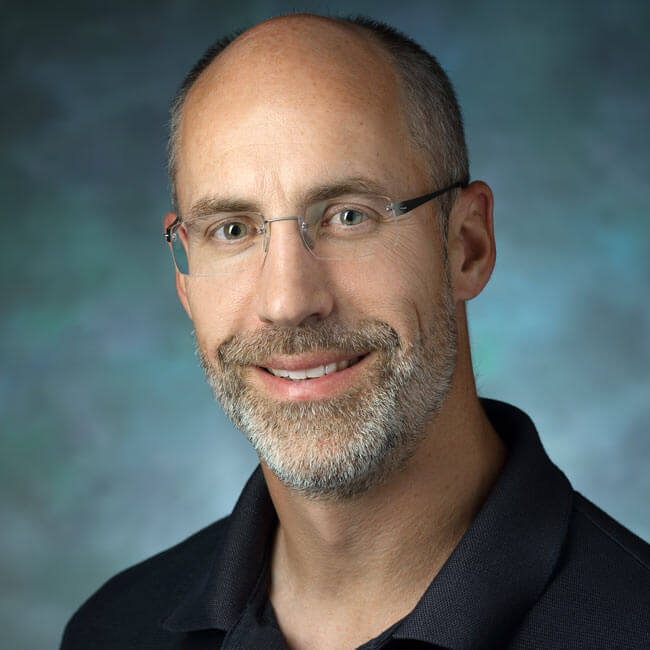 Dwight Bergles is a professor in the Department of Neuroscience who studies interactions between different cell types in the nervous system. He focuses on glial cells, which were named after the Greek work for “glue,” because they were first thought to be inactive cells that just held the signal-transmitting neurons in place. His research, and that of others, has dramatically changed that perception.

What drew you to neuroscience?

BERGLES: My father was a professor of mechanical engineering, so I grew up surrounded by science, but I was always more interested in living things than in pipes and boiling water. Oddly enough, while I grew up in Iowa, I really wanted to become a marine biologist, even though the nearest aquatic life was the catfish in the nearby Skunk River. Jacques Cousteau’s expeditions really inspired me.

I decided to go to Boston University so that I could study with the faculty at the Marine Biological Laboratory in Woods Hole, Massachusetts. Many of the scientists there were not marine biologists in the Cousteau mold but neuroscientists who studied aquatic animals because of their simple, more accessible nervous systems. I became fascinated by the complex behaviors that invertebrates, like squid and jellyfish, are capable of, even though they have only a few nerve cells.

Why did you decide to study glial cells, when most neuroscientists study neurons?

BERGLES: Curiosity. We know lots about neurons, like how they generate their electrical signals and pass them on to other cells, and even how certain neural circuits process information. Glial cells are about as numerous as neurons. We’ve known about their existence for a long time, but in most cases, we only have a vague idea of what they do and how they do it. There are many different glial cell types, and they’re specialized for different functions. It’s a big unknown how they communicate with neurons and how they alter the environment of the brain. There is a sense that everything we discover in the field is brand new, and that’s really exciting!

What do you like to do outside of the lab?

BERGLES: I joke that I fantasize about having hobbies. Most of the time, I’m hanging out with my family. I enjoy swimming for the endurance and the quiet time. Occasionally, I get to go scuba diving and dabble in underwater photography. I like the thrill that comes from discovering, say, a colorful shrimp inside a sponge or an octopus out for a midnight snack.

I actually learned to scuba dive while I was in high school in Iowa. It was snowing and frigid when I got my open water certification in a gravel quarry. After graduate school, my wife learned under similarly unpleasant circumstances, this time in the chilly Hood Canal in Oregon—where I did my postdoc. Now that’s love!