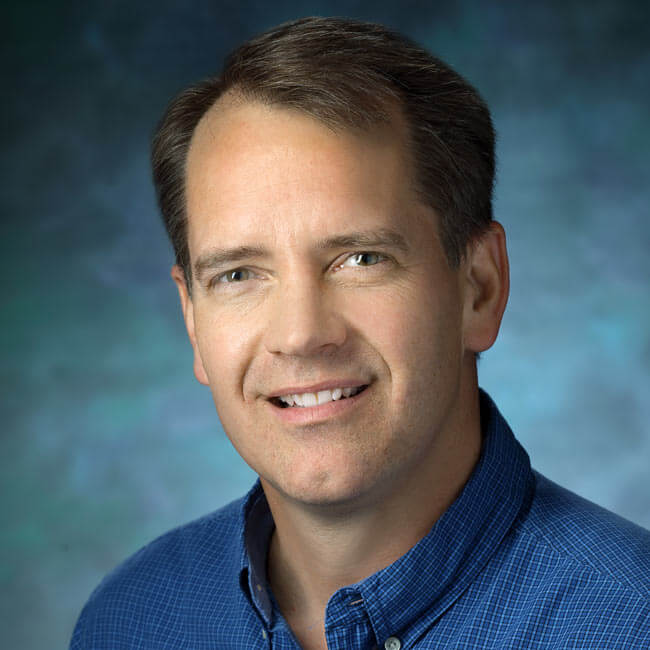 Doug Robinson is a professor of cell biology and of pharmacology and molecular sciences, with a joint appointment in medicine. He studies the proteins that control the shapes of cells.

How did you get into science?

ROBINSON: I grew up on a farm in southern Indiana where we raised sheep and cattle. My dad was a vet and my mom was a school teacher. I used to help my dad in his clinic and around the farm. The sheep we raised were Suffolks, which commonly inherit a genetic defect called spider lamb syndrome that causes skeletal abnormalities and eventual death because their limbs can’t support their weight. That exposure got me interested in the role of genetics in health.

Doug Robinson (far right) with his wife (third from the left) and members of his lab before beginning construction on the BHGH girls home with ABC’s Extreme Makeover Home Edition team.

How did growing up on a farm prepare you for a research career?

ROBINSON: I’m convinced that what I do now is the same thing I did back then. I was involved in 4-H and would breed sheep to show at the fair. It took me 10 years of carefully selecting the best ram to mate with the best ewes before I came away with a grand champion trophy. In science, you often have to work at the same thing day after day without seeing breakthroughs. Your grants get rejected and you have to reapply. And your experiments don’t work and you have to troubleshoot them. I developed the resourcefulness and perseverance I needed by working on our farm.

ROBINSON: We try to understand the proteins that control the shapes of cells. I’ve been here for 13 years now. For the first 10, we focused on the basic shape-changing mechanisms of a simple, one-celled amoeba called Dictyostelium. Now we are beginning to apply those principles to human cells and mouse models, which is really exciting.

Shape might not seem so important at first, but it really is. For example, in order for a muscle cell to exert any force, it has to be long and firm. A soft, round cell would do no good. Shape also matters in disease. A tumor cell has to become squishy before it can squeeze through the “biological obstacle course” outside of the tumor and set up shop in a new tissue—metastasize, in other words.

What do you like to do outside the laboratory? 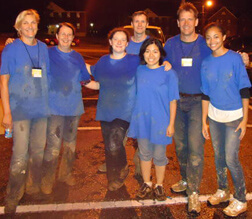 Doug Robinson (second from right) with his wife (far left) and members of his lab after a long day of construction work to build the BHGH girls home.

ROBINSON: For nearly seven years now, my wife and two daughters and I have been volunteering at the Boys Hope Girls Hope (BHGH) home in East Baltimore. It began when my wife, Lisa Naeger, heard an interview on NPR with Chuck Roth, then the BHGH director. He described BHGH’s approach to helping young people get out of poverty, taking one child at a time and focusing on education, while providing the infrastructure and support the students need to succeed. That is a philosophy that Lisa and I share, so we wanted to help out. Getting involved with BHGH has been terrific. We became a “family mentor” for one of their students, Charles, and this has been great experience for our whole family.  Charles is now a sophomore biology major at LaSalle University where he is an excellent student with a very bright future.

Our involvement with BHGH has also grown into a program, called the Summer Academic Research Experience (SARE), that provides summer internships to young men and women from BHGH, The SEED School of Maryland and The Crossroads School. It’s been a real bonding experience for everyone in my lab, and it’s really satisfying to see the students’ growth.

Doug Robinson on the Shapes of Cells

Douglas Robinson, Ph.D., professor of cell biology at the Johns Hopkins University School of Medicine, explains how their studies of cell shape using amoebas might lead to insights into human diseases like cancer.