Cynthia Wolberger is a professor of biophysics and biophysical chemistry and of oncology. She studies the small signaling protein ubiquitin.

WOLBERGER: I had relatives who gave my brother books about science, and I found them more interesting than he did. I also had the good fortune of growing up in New York City, where I attended the Bronx High School of Science. It was a fabulous environment that allowed me to explore my interests. Everything else grew out of that, even my interest in biophysics. The summer before my senior year, I participated in a National Science Foundation program at Cornell. I went on to go to college at Cornell, where I majored in physics and worked in a biophysics lab that focused on physical questions that arose from biological entities, like proteins and membranes. I decided that I wanted instead to use physics to solve biological questions.

What questions do you work on in your laboratory?

WOLBERGER: I’m interested in the small signaling protein ubiquitin, which is found ubiquitously throughout eukaryotic cells. What’s fascinating is that ubiquitin is such a versatile signal because it can be attached to itself to form different types of ubiquitin chains. The cell does very different things depending on how many ubiquitins are attached in what way to which protein. For example, one particular type of ubiquitin chain, when attached to a protein, sends that protein to the cell’s garbage disposal, the proteasome.

But ubiquitin is also involved in how genes are regulated. One of our current projects is figuring out how it gets attached to and removed from the histone proteins DNA wraps around. When a stretch of DNA is wrapped around histones, all of the genes within it are turned off because they are inaccessible to the machinery that reads it. In certain cancers that resist chemotherapy, the enzyme that removes ubiquitin from the histones is overactive. Using techniques such as X-ray crystallography, we recently figured out the structure for a whole group of 18 proteins that work together to add ubiquitin to histones. It was a huge feat, and we are excited about some of the hints it gave us about how ubiquitin gets removed.

What does it take to be a scientist?

WOLBERGER: A lot of patience and faith that, somehow, the experiments will all work out in the end. You need to have a fire in your belly and enjoy working with people. But it’s truly satisfying. I wouldn’t want to do anything else.

What do you enjoy doing outside of the lab?

WOLBERGER: I’ve become quite a foodie and can go to great lengths to prepare a good meal. I find cooking a way to relax and give my brain a break. My family is highly appreciative, so we all benefit. I also love to travel and appreciate the many opportunities I have to do so as a scientist. 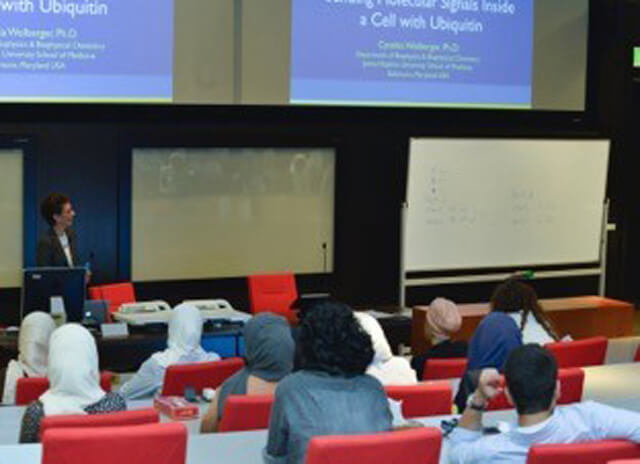 Tell me about an interesting travel experience.

WOLBERGER: Earlier this summer, I went to Saudi Arabia to speak to a group of high school students about my work and being a scientist. It was part of a summer program at King Abdullah University of Science and Technology that was started with the help of one of my high school math teachers. I had to miss my 40th high school reunion, which I was actually disappointed about, but I couldn’t say no to such an amazing cultural opportunity. The Saudi students were delightful, engaged and ambitious, and all had plans to go to college in the U.S. It will be interesting to see how this next generation of youth — both girls and boys — impacts both science and policy in Saudi Arabia.

What’s something few people know about you?

WOLBERGER: When I was 4, the Candid Camera crew came to my preschool to film, and I was one of the kids featured on the show, trying to wink. What people might also not know is that when I was already on the Johns Hopkins faculty, I took up figure skating, but I eventually had to give it up because of a foot injury. I still daydream about doing jumps and spins.

Understanding Ubiquitin | Science: Out of the Box

Johns Hopkins biophysicist Cynthia Wolberger explains how the small protein ubiquitin regulates many events in the cell, including turning genes off and on.