Jordan Green is an associate professor of biomedical engineering. He designs sophisticated molecules with specialized tasks, such as delivering therapeutics to help the body heal.

GREEN: I’ve been interested in science for as long as I can remember. I had that awe and wonder of the world that’s common in childhood, but I never lost it. I used to love trips with my family to the science museum in Miami, where I grew up. I could spend hours and hours there. My parents saw my enthusiasm and encouraged me, saving up for summer camps at the museum and buying me science toys and books. And I watched a lot of Star Trek: Next Generation, which made me excited about exploration.

And how did you get from Star Trek to nanoparticles?

GREEN: For high school, I went to MAST Academy, a magnet school for marine science. The summer before my senior year, I participated in a research internship with the University of Miami’s Rosenstiel School of Marine and Atmospheric Science, across the street from MAST. I studied plankton: how it grows and how it dies from exposure to UV radiation. The death of plankton could significantly affect climate because phytoplankton — which are like tiny plants — absorb approximately half of the carbon dioxide that is absorbed from the atmosphere. I really enjoyed that research but I wanted to do something more directly applicable to human health and I wanted to build something — I’ve always liked LEGOs. So that year, I also became involved in FIRST, an engineering club for students. In college, at Carnegie Mellon, I became interested in bioengineering and did research as a senior on delivery tools for drugs. I still work on those problems, building new types of molecules, called polymers, out of multiple repeating building blocks, just like LEGOs. By engineering the properties of the polymers, we can make them into structures called nanoparticles that perform specialized tasks such as delivering medicines to specific parts of the body to help it heal.

How do you expect the nanoparticles to be used?

GREEN: We have three main particle projects in the lab currently. One (in collaboration with the Campochiaro and Popel labs) is the creation of a time-release coating for a peptide drug that treats causes of blindness such as wet age-related macular degeneration, which occurs when blood vessel grow where they shouldn’t — at the back of the eye. If left untreated, the blood vessels lead to central vision loss, which can be devastating since the patients may lose their ability to drive or see clearly the people in front of them. Currently, patients typically have to get monthly eye injections (not fun!) of a drug that blocks blood vessel growth. The particles that we are testing would keep the drug in the eye longer and decrease the number of eye injections patients need. Plus, the treatment could lead to regression of the blood vessels, improving vision.

The second project focuses on glioblastoma, a particularly deadly kind of brain cancer that’s hard to treat. We designed nanoparticles that can carry DNA to tumor cells in rodents. In one experiment (working with the Brem and Tyler labs), we loaded the nanoparticles with the gene for an enzyme that turns a benign compound called ganciclovir into a deadly poison for brain cancer cells. Rats with glioblastoma lived longer after being treated with those nanoparticles, which gives us hope that the strategy will work in humans too. More generally, this approach of gene therapy can potentially be used to treat many other diseases by being able to turn target genes on or off in particular diseased cells.

Finally, we are trying to improve the treatment of other cancers by training immune cells, called T cells, to be better cancer killers. T cells are good at multiplying and attacking tumor cells, but only after “antigen presenting cells” (APCs) show the T cells what tumor cells look like by displaying tumor protein pieces. Researchers have tried to exploit this phenomenon by creating artificial APCs (aAPCs) “decorated” with protein pieces from tumors. In such a strategy, one could remove T cells from patients, mix them temporarily with the aAPCs or other activating materials, and then return the activated T cells to the patient’s bloodstream. It’s one form of what’s known as immunotherapy.

We’ve improved on this (together with the Schneck lab) by making nontoxic, biodegradable aAPCs that could be injected directly into the bloodstream, thus reducing the potential manufacturing and regulatory challenges that come with taking cells out of the body to expand them and then putting them back in. We also changed the standard, spherical aAPCs to be football-shaped to better mimic real APCs. We realized that when two cells interact, they aren’t like two billiard balls barely touching. They are flexible and interact over a large surface area, more like two beanbags. By simply stretching spherical aAPCs into new shapes, we greatly increased their ability to activate T cells and lengthened survival in mice with skin cancer. Now that we know that shape matters, we are engineering the aAPCs further to find the optimal shape for interacting with T cells.

What do you enjoy doing outside the lab?

GREEN: My wife and I have three kids and we love exploring nature with them, which is what inspired my love of science. I also volunteer with the Cub Scouts and with FIRST LEGO League (FLL) and FIRST LEGO League Jr. teams at Fullerton Elementary School. This past year I coached seven FLL Jr. teams on building models with LEGOs, gears and motors to creatively express their ideas to manage waste and recycling as well as two FLL teams that built and programmed LEGO robots to complete autonomous tasks. 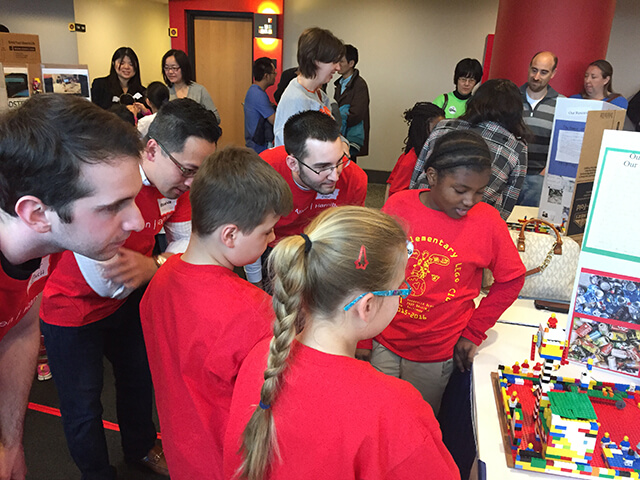 *Green also has joint appointments in the Departments of Ophthalmology, Oncology, Neurosurgery, and Materials Science and Engineering, and is a member of the Institute for NanoBioTechnology, the Translational Tissue Engineering Center and the Johns Hopkins Sidney Kimmel Comprehensive Cancer Center.

Find out why Jordan Green was named one of Popular Science's Brilliant Ten.

Programming Cancer Cells to Self-Destruct | Science: Out of the Box

Johns Hopkins biomedical engineer Jordan Green talks about a goal of his research: making nanoparticles that could program cancer cells to self-destruct.

Biomedical engineer Jordan Green talks about his path to Johns Hopkins, treating people rather than the disease, and biomaterials and drug delivery.

Some Ideas Need a CEO


Biomedical engineer Justin Hanes innovates new ways of getting drugs past mucus barriers to treat mucus-protected areas like the eyes. Then he uses his business sense to get solutions out of the lab and into patients’ hands where they can make a difference.