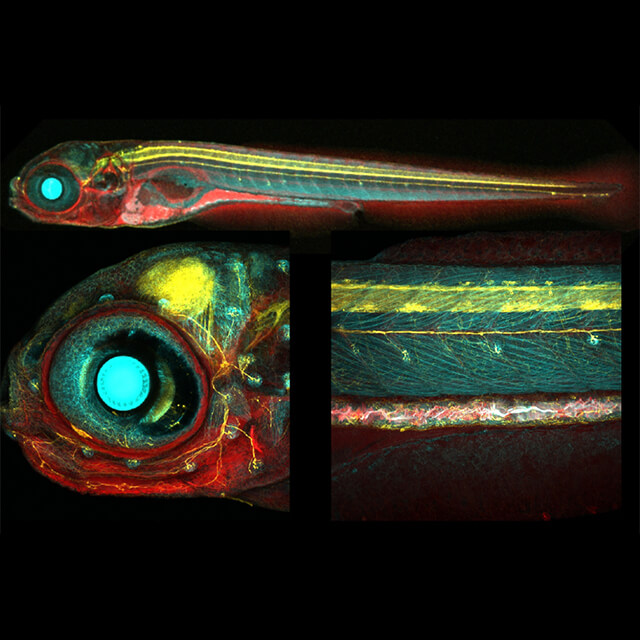 This article first appeared in Dome (May 2018)

May 2018—From floor to ceiling, in row after row of small, bubbling tanks, 30,000 tiny tropical fish are unlocking the secrets to diseases that have vexed generations of researchers and physicians.

The humble zebrafish, an inch-and-a-half-long freshwater member of the minnow family, is native to the streams, ponds and puddles of the Himalayan region. It doesn’t look much like a zebra, though it does have five horizontal stripes adorning either side.

One of the most interesting things about zebrafish is that when they lose something — an eye, a fin, a tail, even individual cell types — they grow a new one.

Because their genetic profile is remarkably similar to our own, zebrafish are also found in the Miller Research Building on the medical campus of The Johns Hopkins University, where they provide scientists with genetic clues to medical mysteries. The fish have helped investigators at Johns Hopkins make important breakthroughs toward regenerating eye tissue, understanding thyroid cancer and making sense of the DNA tangles that regulate cell activity.

The Center for Functional Investigation in Zebrafish — or the FINZ center — is a research core facility of the McKusick-Nathans Institute of Genetic Medicine. Thirty different cores from departments across The Johns Hopkins University offer more than 500 different research-related services. The centers allow investigators to share valuable resources and expertise, saving both time and dollars.

FINZ center co-director Jeff Mumm, of the Wilmer Eye Institute and the McKusick-Nathans Institute, says that, in addition to three Johns Hopkins researchers currently maintaining tanks of fish there, the center collaborates with other scientists.

For a fee, FINZ offers numerous genetic services to colleagues throughout the institution, including modifying the genome to produce fish with traits that researchers want to study. For instance, a researcher wanting to study how the liver develops and functions can ask the FINZ center to produce zebrafish with glowing livers. Taking a gene from jellyfish that enables their incandescent glow, the FINZ team introduces that gene into a zebrafish, lighting up the liver and allowing researchers to observe its growth and function.

“That’s the kind of work we do all the time,” says Mumm. “It’s a cheap and efficient process to work with us to create genetically modified zebrafish for specific research needs.”

In 2004, geneticist Andy McCallion, along with former colleagues Shannon Fisher and Steven Leach, proposed that Johns Hopkins build its own zebrafish facility. McCallion, who co-directs the FINZ center, and Fisher, now a faculty member at Boston University, convinced medical school leadership that zebrafish would offer a more efficient, less expensive way to do genetics research.

McCallion and his lab team dig deep into genetic codes that control when and where genes are switched on/off, combining cutting-edge genomic tools and computational artificial intelligence to find the abnormalities that can influence diseases such as Parkinson’s. He says that, while that work remains arduous, early in his career it was far more difficult.

“We could see sequences that stood out as highly similar among different species, but we didn’t have a large-scale, genomewide way to test our hypotheses,” McCallion recalls. “We needed a way to test hundreds and hundreds of these things. For a lot of reasons, studying the fish gives us that ability.”

In addition to their genetic similarity to humans, zebrafish have other attributes that make them attractive to scientists who need to research large numbers of the same organism. The fish reproduce and mature quickly, they’re easy to maintain and their eggs are fertilized outside their bodies, allowing researchers to harvest newly fertilized embryos. To produce the desired trait in a fish, they can introduce new genes or remove genes from the harvested embryos. And since zebrafish embryos are translucent, scientists can observe their development in real time, watching organs and whole systems grow from stem cells.

Mumm says that, while science has focused on mice as models to study disease since the creation of the first genetically altered mouse in 1980, zebrafish have, in recent years, emerged as an important model species as well.

Zebrafish Research | Behind the Scenes of the Johns Hopkins Zebrafish Facility

Zebrafish play an important role in research at Johns Hopkins. Frazer Matthews and Hannah Edelman take us on a tour of the facility where 30,000 fish help researchers unlock clues to disease.


For many years, fruit flies were the species of choice for genetics researchers, sharing better than 61 percent of genes with humans. And while the insects still play important roles, key physiological differences make fish, as fellow vertebrates, attractive.

While zebrafish share about 71 percent of the human genome, in some key cases, fish genes are near-perfect matches for people. According to a 2013 study by British researchers, 82 percent of genes associated with human diseases and disorders have a zebrafish counterpart.

Mice and humans are a closer genetic match, at about 85 percent. But Mumm says, “zebrafish provide a fresh perspective, affording unique opportunities beyond what is possible in mice.” The Mumm Lab specializes in “high-throughput biology,” where automated equipment processes large numbers of samples to enable large-scale chemical and genetic screening.

This approach is difficult and expensive to apply to mice and thus has largely been limited to cell culture work. However, due to their small size, zebrafish have emerged as a living disease model platform for high-throughput drug discovery. The Mumm Lab has developed a zebrafish-based screening approach that evaluates drug effects faster than ever, processing tens of thousands of fish per day.

Because their genes can be modified so inexpensively and in great numbers, Mumm says zebrafish allow scientists to pursue large-scale genetic research initiatives as well, interrogating the function of larger numbers of genes in shorter amounts of time.

Johns Hopkins surgeon Jason Prescott maintains numerous zebrafish tanks in the FINZ center. Three days a week, he operates on patients who have thyroid cancer. But he also has a research lab aimed at, one day, reversing the disease’s progress and eliminating the need for surgery. Zebrafish help Prescott better understand how genetic mutations can cause healthy thyroids to turn cancerous.

“The goal is to put myself out of the surgery business,” he says.

Prescott and his lab team study the defective gene coding in patients who come to him for thyroid cancer surgery. When they isolate a patient’s faulty gene, they introduce a similar gene in zebrafish. Then they observe the fish to learn the cancerous cells’ origins and how they replicate.

“The fish have thyroid glands that are very similar to ours,” Prescott says. “Anatomically, they’re in just about the same place and they perform a similar function. And because they’re living, we can actually see the biology in real time, as it happens.”

The fish also allow for fast and efficient testing of drugs to combat disease.
“Bypassing more primitive screening techniques, we’re able to save time and money by testing drugs on hundreds of fish at once,” he says. In one example of Prescott’s research, individual fish, genetically modified to have cancerous thyroids, are placed in shallow dishes of water. The fish have been engineered so that their thyroids glow when a particular drug causes a particular reaction. The researchers introduce various drug compounds to the water and study the results.

Zebrafish have played a key role in Prescott’s pursuit of pharmaceutical breakthroughs to combat thyroid cancer.

“The gold standard for preclinical drug trials is to work with a living organism,” he says. “It allows us a much more realistic environment than working with cells growing on a plate.”

The Capacity for Self-Repair

Medical student Hannah Edelman is six years into her M.D./Ph.D. program, researching human genetics and pediatric diabetes. She spends many hours in the FINZ center studying how zebrafish never get the disease.

In type 1 diabetes, a patient’s immune system attacks and destroys the cells in the pancreas that produce insulin, the hormone that regulates blood sugar. While humans cannot regenerate these cells, zebrafish can.

“They can regrow pancreatic beta cells,” she says, referring to the cells that store and release insulin. “I want to know what’s so special that allows them to do this. We’re trying to find a way for humans to be able to regenerate these cells. That would mean a lot in the treatment of type 1 diabetes.”

In Mumm’s work studying degenerative eye disease, he takes advantage of the fact that humans and zebrafish share a trait — a specific cell type that can revert to being a stem cell — that allows them to produce new cells in response to injury or disease in the retina. Thus both species have the capacity to produce new cells to heal the eye.

“Somewhere along the way in their evolutionary selection, zebrafish developed the capacity for self-repair,” says Mumm.

The difference, Mumm says, is that, while the new cells lead to a brand new retina in a zebrafish, humans are not so lucky. “For us, the new cells become scar tissue. It actually does humans more harm than good.” In cell culture, however, these injury-responsive human retinal stem cells have the ability to produce new neurons.

He hopes that by learning how the zebrafish’s robust regenerative abilities are controlled, we can harness dormant regenerative capacities in patients with degenerative eye diseases. He says the fish are speeding up the process by helping eliminate the scientific dead ends faster than ever before.

Combining these studies with the high-throughput screening techniques in his lab, Mumm says, “We can find out what doesn’t work at step one rather than at step 52. That amounts to a whole lot of time and money saved.”