We Need to Talk About Alzheimer's Disease 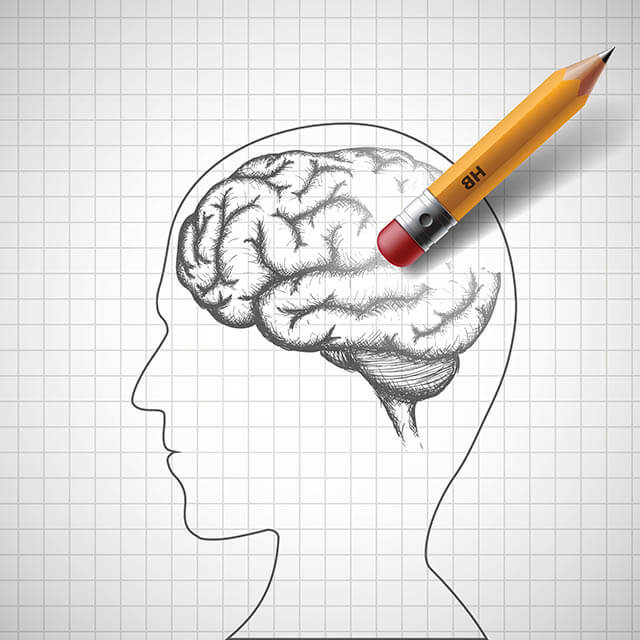 We Need to Talk About Alzheimer's Disease

September 2017 — One in three older adults will experience some form of dementia, so why are families not talking about it? Constantine Lyketsos and Paul Worley share the developments in treatment and advancements toward a cure to fight the silence.

At 21, I met my boyfriend’s grandfather for the first time. A white-haired man with a sharp wit at 93 years old, he completely surprised me with how “with it” he was. It wasn’t until my boyfriend explained that this was not unique to his grandfather, and that most people do not experience cognitive decline as they age, that I realized my situation was not the norm. No one in my family ever discussed that what my own grandparents were experiencing was dementia, a disorder of brain function and not a normal part of aging.

My family is not unique in this regard. According to the Alzheimer’s Association, one in three older adults will experience some form of dementia and, like other mental illnesses, this is not widely discussed in many families. Alzheimer's disease is estimated to cause 60 percent to 80 percent of dementia cases. Unfortunately this disease cannot yet be stopped or reversed; currently doctors can only treat the symptoms, which include personality changes, anxiety, disorientation and paranoia, in addition to the better-known memory loss. However, huge advances have been made in the last decade in the diagnosis and treatment of the disease.

Constantine Lyketsos, M.D., is one Johns Hopkins researcher working to gain a better understanding of Alzheimer’s disease so we can develop better treatments. “My colleagues and I are developing better strategies to study the disease real-time in the brain and then using those strategies to develop specific treatments. What we have right now are largely symptomatic treatments. We need more and better research on what causes the underlying disease,” says Lyketsos.

He divides research efforts on Alzheimer’s disease into two types: cure-oriented studies, which focus on the biology of the disease, and care-oriented, which develop best practices of treatment and translate them into wide use. His group, and others around the world, are working on better ways to study Alzheimer’s in real-time in the brain and use this information to treat those with the disease.

Many, if not most, cure-oriented research studies are currently in the basic sciences—improving the technology used to look into the living brain to trace the “fingerprints” of Alzheimer’s, some of which can be detected in the blood or cerebrospinal fluid. 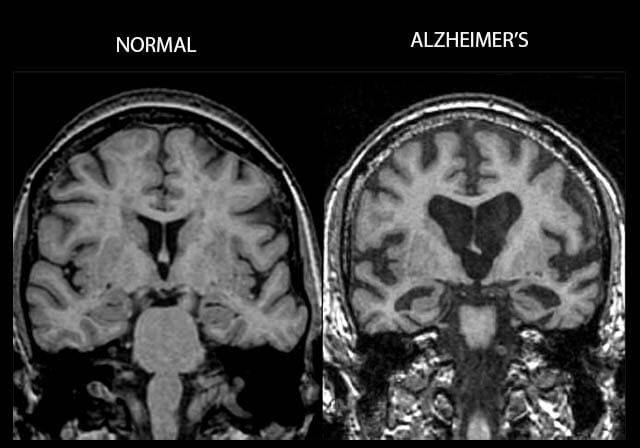 Paul Worley, M.D., and his laboratory have identified one of these markers, called NPTX2. NPTX2 was identified in basic studies of the molecular basis of memory and Worley’s team found that its presence was consistently reduced in patients with Alzheimer’s disease. In order for signals to be conducted through our brains, groups of neurons need to fire simultaneously. NPTX2 is required during development to establish circuits essential for synchronous activity, and when you lose NPTX2, as in the Alzheimer’s brain, you lose the ability for neurons to fire in synchrony. As a result, information is no longer effectively communicated within the brain and the ability to process information or retrieve memories is lost.

To study NPTX2, Worley’s research group works with both human tissues and mouse models of Alzheimer’s disease. They take measurements from human cerebrospinal fluid and human tissue samples to correlate NPTX2 levels with disease progress. They then work with mice with Alzheimer’s disease to observe whether changes in the levels of NPTX2 are paralleled by cognitive and behavioral changes. 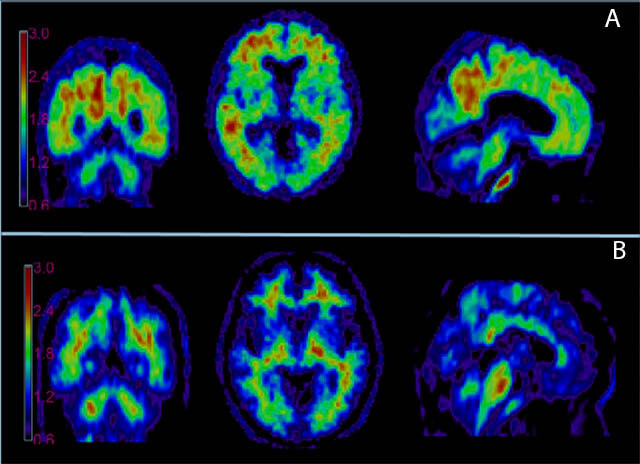 The brains of Alzheimer’s patients (A) accumulate more Amyloid proteins than their healthy counterparts (B).

The group’s findings have revealed evidence that the same mechanisms that allow healthy brains to process and store information are the driving processes causing synapse failure and neurodegeneration in an Alzheimer’s brain. “If neurons don’t have synchrony, they essentially undo the wiring. The process of memory in the Alzheimer’s brain appears to actually drive memory loss,” says Worley. Worley notes, “The most important aspect of this discovery is that NPTX2 reduction is unrelated to known mechanisms in Alzheimer’s and appears to represent a new process that underlies memory failure.”

Worley’s team is now asking how the expression of NPTX2 can be controlled. They suspect that miRNAs, tiny sequences of RNA that function in gene control, are responsible for regulating the protein levels and have identified some miRNAs that can target the gene. Because NPTX2 is secreted, researchers can measure its levels in the cerebrospinal fluid of living patients, make correlations and track the disease progression.

To develop clinical treatments, Lyketsos explains that researchers need to take information from studies like these and many other sources in order to properly characterize a patient’s disease.

“When I started out as a psychiatric resident in the late 80s early 90s, the view of people with dementia was bleak. You got diagnosed and it was a death sentence. The goal was basically to make sure you were safe,” says Lyketsos. Now things are very different, he explained. “We understand now that Alzheimer’s is not a single disease, it is a series of subtypes that each progress a bit differently; care has evolved accordingly.

“Now, we put an emphasis on home-based care, something we pioneered here at Hopkins. We demonstrated how, if we catch the symptoms early on, people can live in their own home for many more years with better life quality,” explains Lyketstos. The Maximizing Independence (MIND) at Home program is one such project pioneered by Hopkins. Participants in this comprehensive home-based care program work with an interdisciplinary team of caregivers who assess how to make a patient’s home best fit their needs. This team also provides referrals for specialized care and educational opportunities for the patient and their families to learn more about managing the symptoms of their disease. Research from this program has revealed its benefit to patients at various stages of disease and helps them stay in their homes for an average of nine months longer. 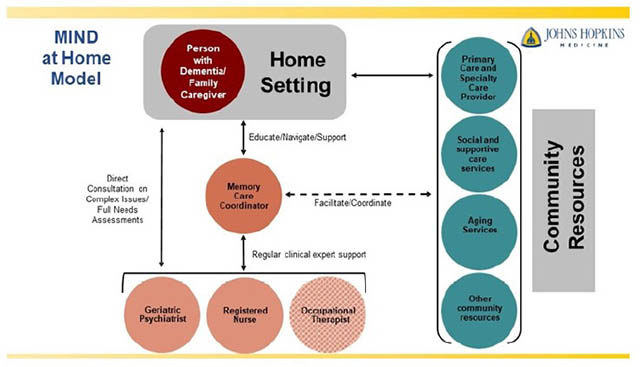 “However, I don’t think people are aware of the advancements that have been made; even primary care doctors miss an early diagnosis more often than not,” says Lyketsos.

Recent surveys suggest he is correct. In a survey of over 2,000 adults from the U.S. and Europe, Alzheimer’s disease ranked just behind cancer as the most-feared disease. I personally fear a future where I experience the same symptoms as my grandparents: memory loss, aggravation, physical disability and paranoia. But we need to begin talking about the hope. Today our understanding of dementia and Alzheimer’s is better than ever and treatments are available that can help extend our lives and improve quality of life. With continuing basic and translational research, we can be hopeful that therapies that target the disease directly, and not just the symptoms, are on the horizon.