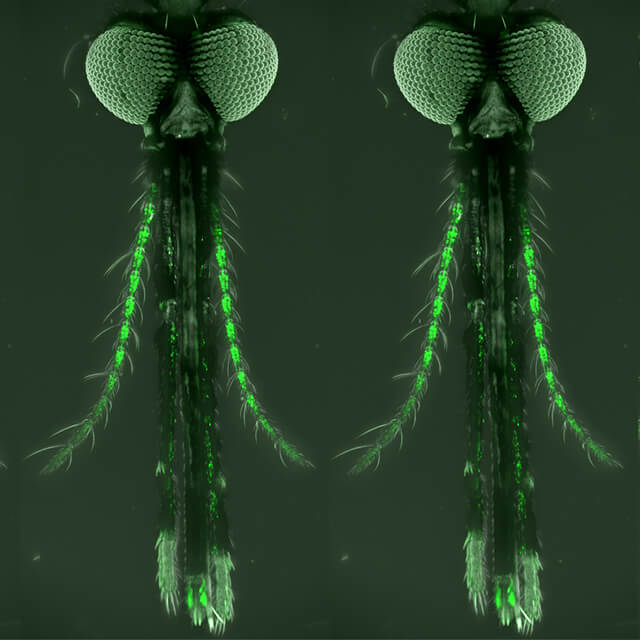 Altering the ‘flavor’ of humans could help fight #malaria

October 2016—Postdoctoral fellow Olena Riabinina burst through the door of her apartment. “We have a green mosquito!” she said. Her friend, Paro, who happened to be visiting for the week, didn’t need to be told what that meant: Riabinina had successfully engineered a malaria mosquito so that she could visualize neurons involved in its sense of smell. It was a big step forward for a project whose success had never been assured — but that has the potential to save millions of lives.

Getting Mosquitoes to Tell Us Their Smell Preferences

Since mosquitoes use their sense of smell, or olfaction, to find us, understanding how different odors guide their blood-seeking behavior could help us foil their efforts. So in 2014, neuroscientists Riabinina and Christopher Potter set out to learn about a subset of olfactory neurons by making them “glow” green. They had recently developed a novel genetic method to do something similar in the fly Drosophila melanogaster and now wanted to try the technique in an insect more relevant to human health: the malaria-bearing mosquito Anopheles gambiae, which is responsible for the deaths of some 450,000 people a year.

Introducing the green glow would involve inserting two sets of foreign genes into different strains of mosquitoes before breeding them together. It wasn’t going to be cheap or easy. So Potter joined forces with Marcelo Jacobs-Lorena, a mosquito expert from the Johns Hopkins Bloomberg School of Public Health, and applied for a Synergy Award, a $100,000 grant from Johns Hopkins designed to kick-start collaborations among faculty members and support high-impact projects. It was a perfect fit.

To introduce a foreign gene into a mosquito, making it “transgenic,” one has to inject the desired gene into barely visible embryos and hope that it ends up in the embryos’ egg or sperm cells so they can pass it on to their progeny. The whole process is usually left to experts — in this case, those at the University of Maryland’s Insect Transformation Facility. Still, making transgenic mosquitoes is a time-consuming proposition with no guarantee of success.

“For fruit flies, you have to inject about 200 embryos to get a few that survive the trauma, are fertile and have the foreign gene inserted into their genome,” says Potter. “That takes a few weeks. Mosquitoes are more finicky for some reason, so you have to inject almost 3,000 to get a couple successful transgenics, and the whole process takes about three months.” And, since Potter’s technique, named the Q-system, required the creation of two transgenic strains, multiply those numbers by two.

To understand why Potter wanted only half of the Q-system in each mosquito strain, think of batteries and an empty remote control. Each on their own is useless, but together they can turn on the TV. And those same batteries, snapped into different remotes, can turn on different appliances. Similarly, Potter’s Q-system, if he could make it work, would give mosquito scientists many options for future experiments. 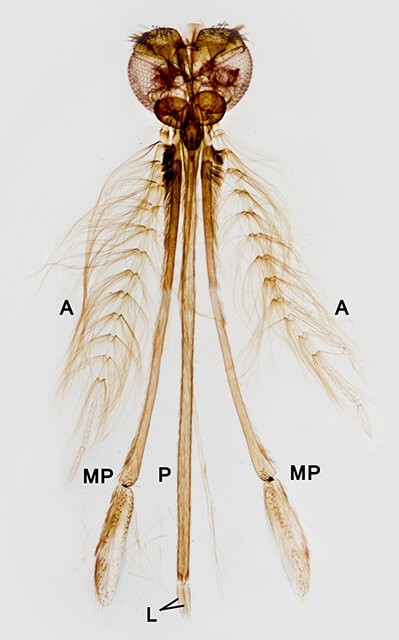 An enlarged view of the head of a female Anopheles gambiae mosquito, showing its antennae (A), maxillary palps (MP), proboscis (P) and labella (L).

The neurons they wanted to “label” green detect odors through proteins called odorant receptors (ORs) and are found in all three smell-sensing structures in mosquitoes: antennae, maxillary palps and labella. To genetically target those OR neurons, the first half of the Q-system had to harness a property specific to them. So the research duo used the Orco promoter, a short piece of DNA that precedes the Orco gene and helps turn it on in OR neurons. They paired the Orco promoter sequence with a gene that makes a protein called QF2, generating transgenic mosquitoes whose cells would make QF2 only when Orco was activated, i.e., only in OR neurons.

The second half of the system began with an enhancer called QUAS that turns on a nearby gene only after QF2 binds to it. The gene they paired it with makes a glowing green fluorescent protein, taken from jellyfish. Once mosquitoes from the two strains mated, Orco would guide OR neurons to make QF2, which would bind to QUAS, which would turn on the green fluorescent protein.

Riabinina peered down a microscope at about 100 progeny, looking for a glow of green. Finally she saw it — a mosquito with green cells on its antennae — and knew everything had come together. “This is the first time anyone managed to specifically target neurons in mosquitoes. Previously, we had to use flies as proxies for all insects, but now we can directly study the sense of smell in the insects that spread malaria,” says Riabinina.

Following the green OR neurons from all three “noses” into the brain, Riabinina and Potter discovered that An. gambiae mosquitoes, in contrast to flies, process olfactory information in not one, but two regions of the brain. Specifically, neurons from the labella don’t go to the antennal lobe, as was assumed, but to the subesophageal zone, which had never before been associated with the sense of smell in insects — only with taste.

“That finding suggests that mosquitoes don’t just like our smell, but maybe also our flavor,” says Potter. “Odorants on our skin are probably picked up by the labella and influence its taste, guiding where the mosquito bites.”

This extra information could lead to new ways of repelling mosquitoes. “A combination of repellant odors targeting both antennal and labellar neurons could be doubly effective, since antennae are good at picking up long-range signals and labella at short range,” says Potter. He adds that DEET, the most widely used mosquito repellent, is effective, but its mode of action is poorly understood, and it’s too costly to use worldwide.

The Sky’s the Limit

While he and his team continue their work in An. gambiae, others are already testing his system in different species.

Conor McMeniman, at the school of public health, studies smell in both A. aegypti and An. gambiae. He plans to use the Q-system to learn more about how the mosquito brain receives and processes olfactory cues, and how that information guides host-seeking behavior.

“The beauty of the Q-system is its two-part nature,” says McMeniman. “The Orco piece can be swapped out with lots of other DNA segments so that the system turns on in cell types other than OR neurons. And the green fluorescent protein can be swapped out for genes that play other roles, even ones that would kill a subset of cells to discover their function or to make the mosquitoes less harmful.”

Leslie Vosshall, a professor of neurobiology at Rockefeller University and an expert in mosquito genetics and behavior, studies Aedes aegypti mosquitoes, which carry Zika virus. She says, “We are already in the process of ‘Potterizing’ our work to see if his Q-system will work in our mosquitoes.”

“The field of mosquito brain science is very young, and up to now it’s been mostly descriptive,” she adds. “Now we have the power to genetically manipulate neurons — and probably other cell types — to see how they really work.” In other words, Potter’s work has brought mosquitoes into the modern age of genetics, thanks to a bit of Johns Hopkins synergy.

Exploiting the Weakness of Mosquitoes

Neuroscientist Christopher Potter and his team understand that mosquitoes pass on a disease through a simple bite. They are working to understand how an insect’s brain interprets and responds to odors. This will allow them to find better methods to stop the spread of diseases, such as malaria and Zika virus.