Partnering with Industry for Better Education in Drug Discovery

Partnering with Industry for Better Education in Drug Discovery

January 2018 — Natalia Majewska spent the summer after her junior year at Northwestern University interning in a lab at MedImmune, the Gaithersburg, Maryland-based global biologics research and development arm of pharmaceutical giant AstraZeneca. There, she worked in a lab developing synthetic proteins.

“It was definitely a wake-up call seeing how science can be done in so many different ways, and how MedImmune has so many resources to make science more fun and easy to do,” says Majewska, who has career aspirations in the biopharmaceutical industry.

So when it came time to applying to Ph.D. programs for chemical engineering, Majewska was highly intrigued by an announcement that Johns Hopkins was starting a unique partnership with MedImmune to train Ph.D. students for jobs in the biopharmaceutical world.

The Johns Hopkins-MedImmune Scholars Program, believed to be a first-of-its-kind training program between a major university and a biopharmaceutical company in the United States, enables students to learn firsthand the process and challenges of drug discovery and development while still earning a traditional Ph.D. Research projects, managed by mentors at Johns Hopkins and MedImmune, may be conducted at both locations. After defending their thesis following a five-year planned period of study, students can add on a yearlong internship at MedImmune to learn more about nonlaboratory careers such as science writing, project management or clinical operations. 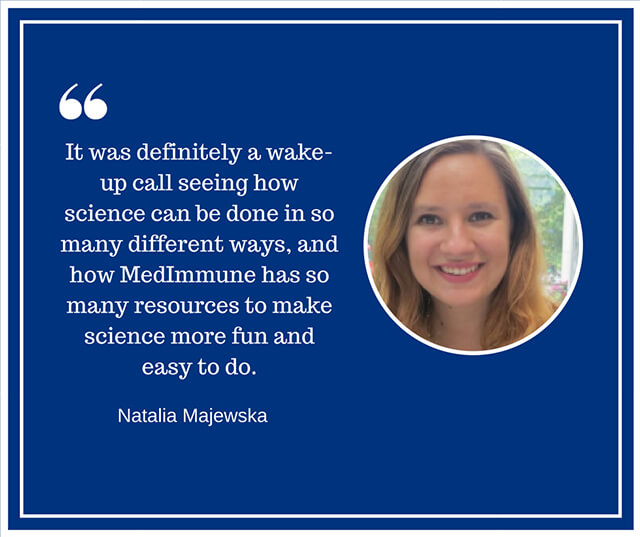 
“Natalia and I have the honor of paving the way,” says Lam. “How we go through the program will help set an example for other students and similar programs that will be modeled after this. I’m grateful for this opportunity.”

Biopharmaceutical products are generally produced in well-characterized cell lines. One of the ones commonly used is Chinese hamster ovary (known as CHO cells) for the production of therapeutic proteins. Majewska will study the factors influencing glycosylation—the attachment of sugars—of biotherapeutics and develop strategies to better control them. Her mentors are Michael Betenbaugh, professor of chemical and biomolecular engineering at Johns Hopkins, and Nitin Agarwal, principal scientist in MedImmune’s Cell Culture and Fermentation Sciences division.

For a drug to stay in the body and not be seen as foreign by the immune system, Majewska says, it needs to possess a specific chain of natural sugar molecules called glycans. “These modifications are really important,” she says. “There’s been a big push in the field of biopharmaceuticals to study this process and have more of a handle on it. My goal will be to understand how this mechanism works and to be able to predict how scientists can modulate glycan formation in the future.”

Lam will focus on building computational models to better understand how immuno-oncology drugs work in the body. Her mentors are Feilim Mac Gabhann, associate professor of biomedical engineering and a core faculty member of the Institute for Computational Medicine at Johns Hopkins, and David Fenstermacher, vice president of R&D Bioinformatics at MedImmune. While determining her area of focus, Lam was able to meet not only Fenstermacher but three additional MedImmune therapeutic area heads to discuss her work and how it might fit with their interests. “I never thought so many MedImmune leaders would be accessible to me,” she says. “It was a really great experience to be able to discuss research with them.”

“My goal is to build a model and introduce different drugs or therapies into it to better understand the mechanisms of how drugs work in the body,” Lam adds. “Eventually we could scale up this model from a molecular level to a virtual patient, and simulate the effects of these drugs in a population of virtual patients to run a virtual clinical trial.”

The scholars program arose from discussions about being more creative in the training of Ph.D. candidates, says Peter Espenshade, associate dean for graduate biomedical education at the Johns Hopkins University School of Medicine: “There’s been this apprenticeship model forever, where you train with a leader in some field, learn how to do what they do, and then do it. There’s some coursework involved but in laboratory science, a lot of it fits that mold.” He and his colleagues also were realizing that the majority of the 120 or so Ph.D. students accepted each year in the School of Medicine don’t go into careers as academic researchers, in part because there are only so many professorships available.

Espenshade and others launched the Center for Innovation in Graduate Biomedical Education (CIGBE) to focus on this effort. One of their first missions was starting the Biomedical Careers Initiative to offer internships and provide training and networking opportunities to help students access different careers. The second was the MedImmune program. 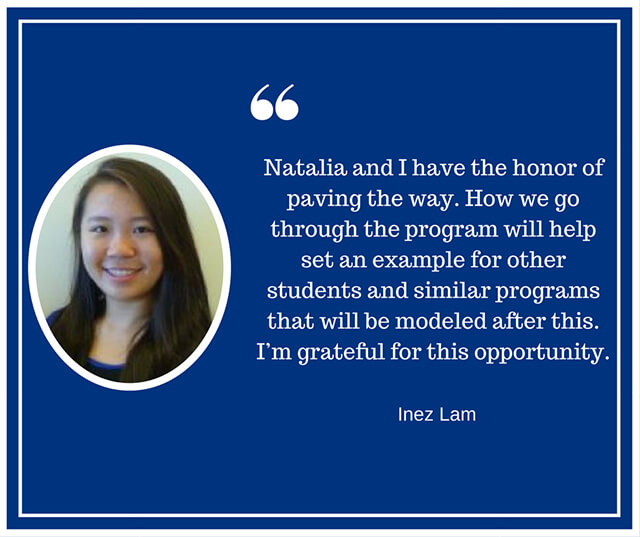 “The goal was to see whether we could incorporate preparation for the biopharmaceutical industry into traditional, outstanding Hopkins Ph.D. training,” Espenshade says. He pitched the idea to Johns Hopkins University President Ronald Daniels. In turn, Daniels spoke with MedImmune Executive Vice President Bahija Jallal, who serves on the university’s board of trustees. “MedImmune is an ideal partner, because one of the keys is being able to publish your research. Scholarship is an important part of Ph.D. training, and MedImmune values this as part of scientific advancement.”

Thesis projects are intended to be student-driven, adds Kimberly Duncan, CIGBE director. Once students are accepted, they and their advisers can meet with a dozen or so MedImmune scientists and create their own collaborations. “Some of the most exciting things happen when you’re looking at junctions from different fields.”

The at Johns Hopkins runs annual surveys, Duncan says, “and it’s very clear that many of our students are interested in careers in industry, or at least learning about careers in industry. It’s just really exciting to see how it’s rolling out.”

Agarwal, Majewska’s mentor at MedImmune, says the collaboration has been helpful to him both professionally, to get his scientific problem addressed, and personally, to mentor and develop a new Ph.D. student for a future in science: “You don’t have many opportunities where you can see the relevance of your Ph.D. project in the biotech industry, and Natalia will get a good picture of that. We hope to take on more students in the future.”
Doctoral students looking for more information about the program or wishing to apply can send an email stating their scientific field of interest to CIGBE@jhmi.edu.

Learning to Think Like a Clinician and Function Like a Startup
With its unique pedagogical approach, the Center for Bioengineering, Innovation and Design (CBID) master’s provides students with a 360 degree view of the biomedical device design process. By exposing students to every element of the design process in both high- and low-resource settings, CBID teaches students to be efficient and effective innovators.