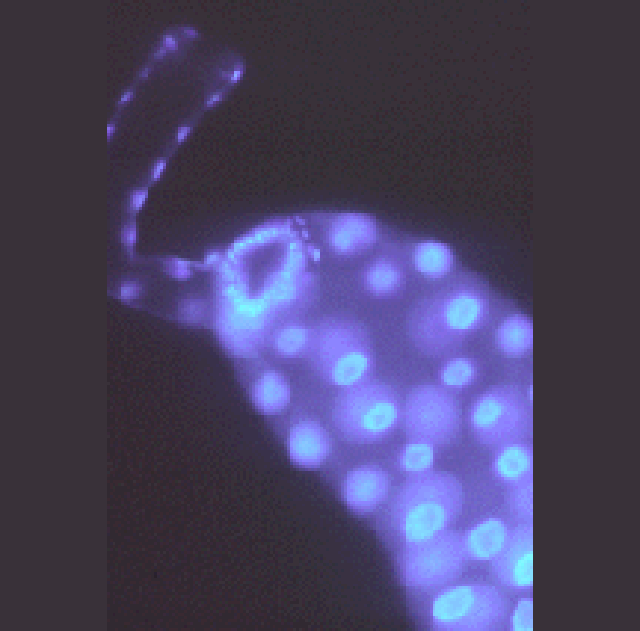 From blood vessels to bronchi, tube-shaped structures are found throughout the body. Deborah Andrew is using a simple model organism to understand how tubes form and function.

July 2012--As plumbers and pasta makers know, the tube is a remarkably practical shape, whether it comes in the form of a pipe or a piece of rigatoni. Tubular architecture is also a recurring theme throughout the human body. These tubes, however, are essential to life. Consider the arteries, veins, bronchiole tubes, intestines and mammary glands: all basically tubes.

“Tubular architecture makes sense,” says Deborah Andrew, a professor of cell biology. The tube is an ingenious means of keeping things separated and of rapidly delivering items—gases, nutrients, enzymes—from one place in the body to another.

Andrew directs an 11-member research team that studies “tubulogenesis,” or the formation of tubular structures. In particular, she focuses on two tubular organs, the salivary gland and trachea of the fruit fly Drosophila, as models for  understanding how tubular organs form and how some acquire the ability to secrete substances. The salivary gland, for example, secretes saliva, a watery fluid rich in enzymes, electrolytes, and mucus that aids digestion and protects against infection.

While flies and people seem to have little in common, the genes that govern the construction of their tubular organs are remarkably similar, says Andrew. “So if we know how a gene works in a fruit fly, we can ask how it works in a more sophisticated way in a human,” she says. “The basic module is often the same, only more elaborate.”

Moreover, revealing how a secretory organ forms and functions in a simple organism like a fly, she adds, could help efforts to find new therapies for diseases that stem from deficits in tubular organs. Type 1 diabetes, for example, occurs when the pancreas (a tubular organ) fails to secrete insulin, and type 2 diabetes is often the consequence of insufficient insulin production.

One question Andrew is asking is how the fly salivary gland forms during development. A few hours after fertilization of the fly’s egg, the salivary gland consists of a flat plate of 100 cells. One of these plates lies on either side of the structure that will become the fly embryo’s head. During the next four hours, each plate of cells folds up to form a cup-shaped organ approximately 11 cells long and nine cells in diameter: the salivary gland. How does this cellular origami occur?

“On the surface, that seems like a really simple problem,” says Andrew. Mold a plate into a cup—no big deal. But simple it is not. The process engages many different proteins. For the cup to form, each cell has to change its shape, some elongating into stretched-out ovals, others squishing themselves down on one side, to mold themselves into the shape required for their particular space in the “cup.” All of these changes must take place in a coordinated fashion with each cell maintaining contact with its neighbors. “It’s like a well-orchestrated dance,” says Andrew.

And that’s not all the gland must do. During their transformation, the cells are also acquiring the ability to crank out the host of proteins that get secreted into the saliva, including digestive enzymes, anti-fungal proteins, and the sugary proteins called mucins, sticky substances that lubricate and help protect the gland.

Andrew’s group has uncovered the role of many of the molecular players in the gland’s development and secretory function. For example:

-FoxA/Fkh – A protein that performs many different tasks. FoxA/Fkh regulates the “invagination,” or folding inward, of the plate of salivary gland cells. The protein also assures that the gland’s cells stay alive and helps determine which proteins get secreted, among other functions.

- Helix-loop-helix protein, or Sage – Works in conjunction with FoxA/Fkh in regulating the gland’s secretions. One hypothesis Andrew is contemplating: In humans, each secretory organ may have its own specialized version of a helix-loop-helix protein that provides specificity. These differences may enable each organ to produce a different substance—for example, insulin in the pancreas and saliva in the salivary gland.

- CrebA – This protein upregulates the machinery required to accommodate  the high volume of saliva the gland produces.

The distance from fly salivary gland protein to medical therapy may seem vast. And in fact, says Andrew, “with basic science, it can often be a long way from discovery to treatment.” But she sees many potential—and exciting—applications that could build upon the insights gleaned from her model system. To name just one, Andrew refers to the decades-long effort to use stem cells as a treatment for people with diabetes. In a healthy pancreas, special cells secrete insulin as well as about 1.5 liters of digestive enzymes each day. Researchers are trying to program stem cells to take over these tasks in patients with diabetes. For their efforts to succeed, says Andrew, the scientists will need to assure that the stem cells receive the proper molecular signals. “So we need to know the rules that govern these cells.”