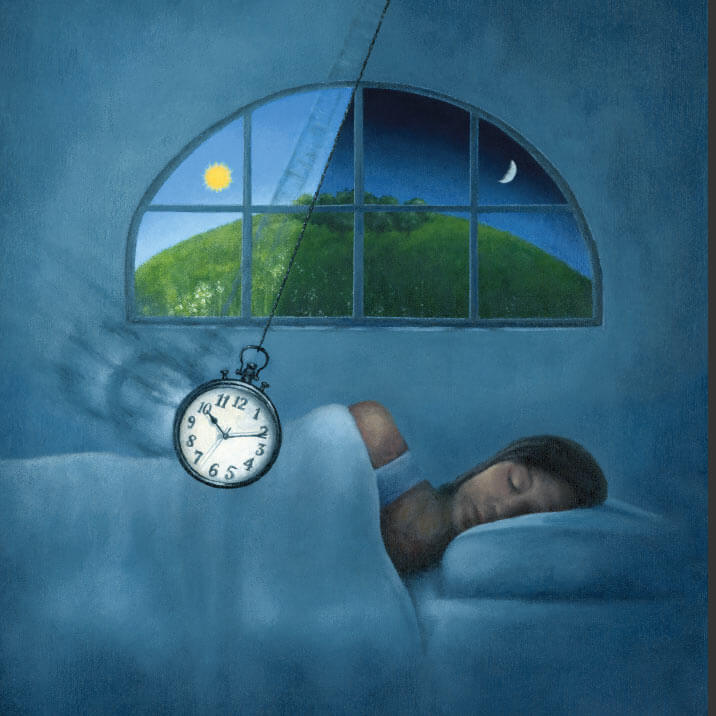 June 2014--Our circadian clock is the invisible hand that brings order to our days, setting the schedule for when we feel alert, sleepy, even hungry. Anyone who’s suffered a bad case of jet lag or an after-lunch slump can attest to its power. Those who continue to battle it—shift workers, for example—risk lasting damage to their health.

Much is known about the genes and proteins that make up the clock, but gaps remain—how, exactly, the clock regulates sleep, for example, and the workings of the brain’s “master clock” that keeps cells in sync. Several Johns Hopkins researchers are among those working to close the gaps, and they’ve recently made some notable finds.

Every cell in the body runs on its own clock, the central gears of which are made up of two proteins called BMAL and, aptly, Clock. Both Clock and BMAL work by turning on genes so that they produce other proteins. When the levels of two of those proteins, Period and Cryptochrome, rise, they begin to inhibit the activity of Clock and BMAL—and, in turn, reduce their own levels. “It’s a negative feedback loop that runs on a 24-hour cycle,” says Mark Wu, an assistant professor of neurology, medicine, genetic medicine and neuroscience. “Together, Clock and BMAL control production of thousands of genes, causing them to cycle.”

But though the gears are fairly well understood, a fundamental question remains: How does the clock tell us when to go to sleep? Looking for an answer, Wu and his team screened thousands of mutant fruit flies to find a strain with insomnia. The culprit, they found, was a mutation in a gene they termed “Wide Awake.” In normal flies, Wide Awake’s protein increases in concentration over the course of the day, peaking at dusk. It makes brain cells more sensitive to a molecule called GABA, which has a quieting effect.

To find out whether Wide Awake is present—and similarly important—in higher animals, Wu teamed up with Seth Blackshaw. They found that mice have the Wide Awake gene, and that its protein is concentrated in a mustard seed-size scrap of the brain called the suprachiasmatic nucleus, or SCN. That turns out to be a strong clue that Wide Awake is indeed involved with circadian rhythms and sleep in mice, a possibility that the two are now investigating further.

Wu calls the SCN “the conductor of the orchestra”; to Blackshaw, an associate professor in the Department of Neuroscience and the Institute for Cell Engineering, it’s the “master clock.” It’s what corrects the clocks on the body’s other cells when they go awry and keeps them in sync with each other.

Blackshaw arrived at the SCN through his interest in brain development. A key to understanding the brain, he believes, is cataloging how genes are turned off and on as stem cells called neural progenitors mature to form the thousands of cell types in gray matter. “I think by knowing the history of a cell, you can understand everything you need to about its function,” he says.

Because of its tiny size, the SCN’s exact role has been hard to pinpoint, so Blackshaw thought it was a particularly good candidate for his developmental approach. Working with Samer Hattar at Johns Hopkins and Eric Herzog’s group at Washington University in Saint Louis, he analyzed which genes are active in different areas of developing mouse brains to identify those that are “turned on” only in the developing SCN. One of the “hits” was LHX1, a member of a family of genes that affect development by controlling the activity of other genes. When the researchers turned off LHX1 in the SCN of mouse embryos, the grown mice lacked distinctive biochemical messengers seen in the SCN of normal mice. The mutant mice also tended to be active at random times rather than in regular 24-hour cycles.

An illustration of the activity patterns of normal mice (left) and mice whose “master clock,” or SCN, has been disrupted. Credit: Cell Reports, Bedont et al.

Blackshaw hopes the mutants can help shed light on the roots of health problems experienced by shift workers and others with disrupted sleep, which include higher risk of diabetes, obesity, depression and cancer. He’s also using them in experiments to identify protein partners of LHX1, as these are likely also involved in controlling SCN development.

Unlike molecular clocks in other parts of the body that can be reset by outside signals like temperature and blood sugar level, the SCN’s master clock is predominantly reset by light. As a graduate student, Hattar, now an associate professor of biology with a joint appointment in the Department of Neuroscience, became interested in how the body detects and responds to light and dark—a process that turned out to be more complicated than expected. “People used to think there were just two kinds of photoreceptors—rods and cones—but in 1999, a research group reported that if you delete rods and cones entirely, mice can still sense light and dark,” Hattar says. In his postdoctoral work in King-Wai Yau’s laboratory, Hattar looked for an explanation. That explanation turned out to be a third photoreceptor, called intrinsically photosensitive retinal ganglion cells (ipRGCs).

Some of the ipRGCs stretched directly from the eye to the SCN, Hattar found. Others “project to 23 different brain regions, affecting mood and alertness, even learning and memory,” he says. In addition to setting the SCN’s clock, light can affect sleep cycles independently of the master clock’s signals, which raises the question of why we need a master clock at all. Hattar thinks the SCN might have evolved to keep animals on the right schedule at times when they couldn’t see the sun—on cloudy days, for example, or while underground.

Like Blackshaw, Hattar is eager to see what the mutant LHX1 mice reveal about the SCN’s effects. He’s particularly interested in how it interacts with other oscillating systems in the brain and in finding out why irregular sleep schedules and exposure to light at night have far-reaching health effects, from moodiness to increased cancer risk. He explains, “We’re hoping that by understanding circadian rhythms and the effects of light, we’ll eventually be better able to help people avoid the consequences of disrupted schedules that affect the molecular clock.”