The Tales Hearts Can Tell 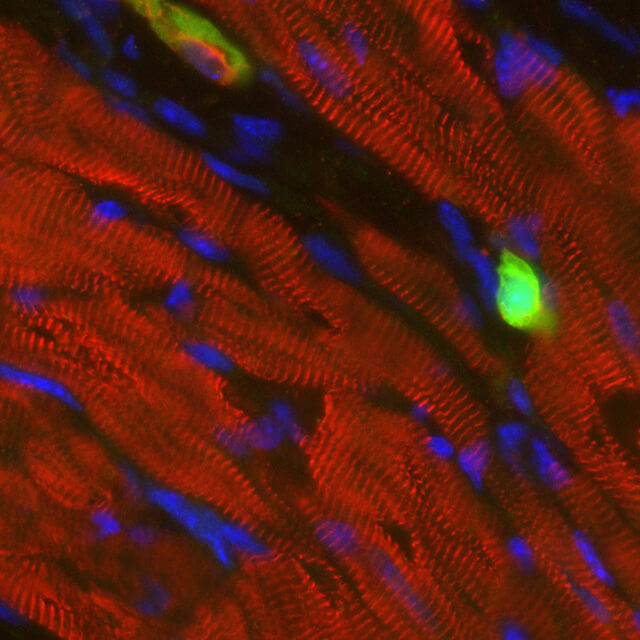 The Tales Hearts Can Tell

A scientific tribute to Edgar Allen Poe's The Tell-Tale Heart

And have I not told you that what you mistake for madness is but over-acuteness of the sense? -- now, I say, there came to my ears a low, dull, quick sound, such as a watch makes when enveloped in cotton. I knew that sound well, too. It was the beating of the old man's heart. It increased my fury, as the beating of a drum stimulates the soldier into courage …

And now at the dead hour of the night, amid the dreadful silence of that old house, so strange a noise as this excited me to uncontrollable terror. Yet, for some minutes longer I refrained and stood still. But the beating grew louder, louder! I thought the heart must burst … In an instant I dragged him to the floor, and pulled the heavy bed over him. (From The Tell-Tale Heart)

October 2013—If only I had known then what I know now—that heart cells can beat in a dish without a heart to enliven them—I might not have let the dead man’s lingering heart beat panic me. I might not have so hastily admitted to my most perfect crime.

But what could I do? And what can I now do but dedicate my powers to the mission before me? To the instruction of all those who follow—lest my ill-deserved plight befall them too.

Thus I begin my discussion of the work of the illustrious Leslie Tung, doctor of philosophy and professor of biomedical engineering. May you take heart and learn patience.

Dr. Tung has been working to study heart cells in Petri dishes for 15 years now. He is trying to understand heartbeats and what causes them to be irregular (a subject very close to my own heart). An irregular heartbeat, he tells me, can be anything from a harmless flutter of the heart to a veritable vortex of electrical activity swirling around and around through the cells of the heart, preventing it from ever really expelling its life-giving contents. Dr. Tung tells me that irregular heartbeats in living beings are difficult to study. It’s hard to be in the right place at the right time with the right instruments to capture these phenomena. These irregular heartbeats, or arrhythmias, are very elusive, and trying to decipher their cause, without dismembering the patient, is quite challenging.

Heart Cells Beating in a Dish

For more than a century now, cardiac researchers have used the next best thing: live (non-human) hearts outside of their organismal origins. By connecting a still-beating heart to a tube flowing with a salty fluid, researchers can keep a heart alive for many hours while it is monitored by sensors that gather data about electrical activity, blood pressure and the like.

There is a real need for still-beating human hearts as well. In fact, Dr. Tung and others in his field have had to look for alternate ways to study the heart because, for reasons that are beyond me, there is a shortage of willing donors. For this reason, he has dedicated his time to growing heart cells in Petri dishes. Thus he can control all aspects of their environment and distill the elements of a particular arrhythmia until he comes upon its cause. He can study cells one at a time, or he can let them grow together into a sheet of cells that literally beat together in unison. (Even mortal terror, such as that which the heart of my victim endured, is something that can be simulated to a certain degree by adding adrenaline to the heart cells.)

Currently, Dr. Tung’s favorite source of heart cells is not hearts themselves. Recent discoveries allow researchers to take skin or blood cells from a patient with a heart disorder and turn them into heart cells, after first “reprogramming” them into so-called induced pluripotent stem (iPS) cells. Tung is quite enthusiastic about iPS cells because they allow researchers to learn the cellular causes of diseases and then screen drugs and other treatments that might reverse those diseases.

He can also mix the heart cells with other types of cells to test his theories about how heartbeats go awry and how they can be fixed. For example, stem cells have been proposed and are being tested as a source of new heart cells to be used in clinical settings to heal damaged heart tissue. With his cells-in-a-dish model, Tung can mix human stem-cell-derived heart cells with traditional animal heart cells to learn how they interact and what their differences are. 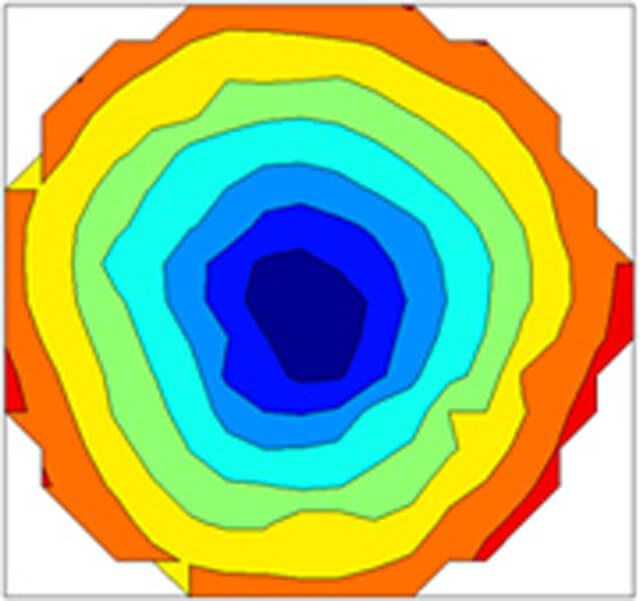 Graduate student Geran Kostecki stimulated the center of a circular sheet of cultured heart cells with an electrode, and measured the spread of electrical activity.

In some heart disorders, Tung says, the problem comes from scar tissue. A healthy heart is mostly made of muscle. The “fibrosis” of scarring can be simulated in a Petri dish by mixing heart muscle cells with fibroblasts, the cells that make scars. By varying the ratio of cells and watching how this alters the electrical activity of the cells, Tung can discern how fibrosis interferes with the function of the heart. He can then tweak genes, apply drugs or physically stimulate the cells to see what might improve the situation.

All of these studies are made possible by a fluorescent dye that, when added to the heart cells, changes its intensity based on the electrical voltage it is experiencing. Thus, researchers can visualize the way in which an electrical wave moves through a sheet of cells and causes them to contract.

One of the limitations of all these scenarios is that the cells are attached to the rigid surface of the Petri dish, preventing the team from being able to measure the strength of their contractions. Tung’s latest project aims to overcome that problem by creating flexible structures, or scaffolds, for the cells. The scaffolds he uses exist naturally in heart tissue and are made of interconnected protein “tracks” that provide a naturally textured structure that encourages the cells to grow in alignment, the way they need to for muscle formation; they also provide a nesting place for the cells while allowing them the freedom to contract and mature.

The natural scaffold that Tung uses is created from a slice of tissue from the heart of a rat or pig from which the cells have been removed. New cells, such as iPS cells from a patient, can then be added to the scaffold, whose proteins provide important instructive signals to the maturing heart cells, helping them to be able to contract with greater force.

Because the scaffolds are not believed to incite the immune system, they can theoretically be taken from animal or human cadavers (like my victim himself), stripped of their cells and then mixed with iPS cells from a patient in need of new tissue. Tung cautions that this technique is far from being perfected and is currently too expensive to be a realistic treatment for failing hearts, but he is excited about its potential for understanding disease mechanisms and testing drugs. Instead of a sheet of cells attached to the bottom of a Petri dish, his team can now study the cells in a three-dimensional environment, which better mimics the natural tissue and allows his team to measure the cells’ contractions.

“We are always looking to create scenarios in the lab that are more and more faithful to the human condition,” Tung says. “It’s a really exciting time to be involved in cardiac research because of the progress being made by combining cell biology with innovative engineering approaches to address key medical problems.”

Hopefully he will be happy to hear that I have found a good tissue source for him, too.

Editor’s Note: Catherine Kolf has a Ph.D. in cell biology and writes about the basic sciences for Johns Hopkins Medicine. She is a big fan of Edgar Allan Poe and an even bigger fan of scientists like Dr. Tung and the work that they do. Neither she nor the faculty at Johns Hopkins is a proponent of the ethical viewpoints presented in this piece.

Full text of The Tell-Tale Heart