The Purpose of La-La Land 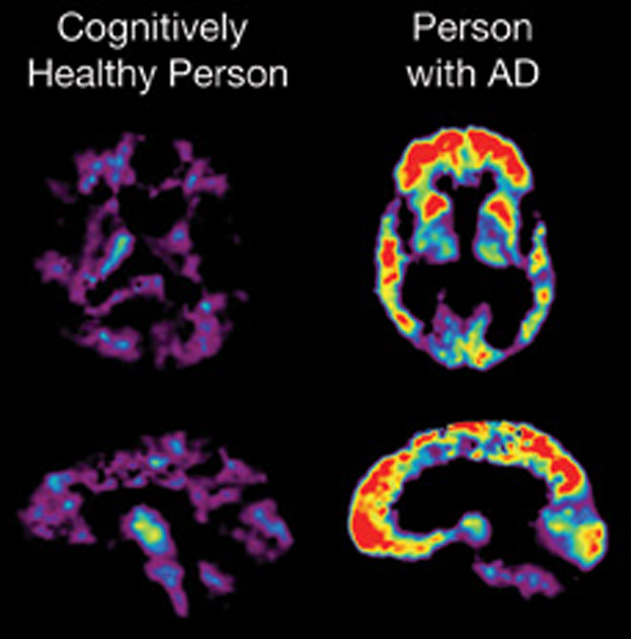 Red and yellow in these brain scans indicate beta-amyloid in the brain of a person with Alzheimer's disease. Source: Wikimedia

The Purpose of La-La Land

June 2014—Like most questions in biology, “Why do we need sleep?” probably has more than one correct answer. Researchers at The Johns Hopkins University are testing a few theories, each of which tries to explain what goes on in our brains during roughly one-third of each day—activity that is crucial to learning, memory and even life itself.

Each neuron in the brain simultaneously “listens” to incoming signals from an astounding 1,000 to 10,000 connecting neurons all the time. Based on this input, it then fires off outgoing signals of its own at a particular frequency and “volume.”

Each connection, or synapse, between neurons shuttles signals in the form of small molecules called neurotransmitters. By modifying the number of receptors on the receiving end of a synapse, a neuron can become more or less sensitive to the signals being sent through that synapse, thus strengthening or weakening its synapses.

Memory and learning happen when new synapses form and existing ones grow stronger or weaker. In the Department of Neuroscience, postdoctoral fellow Graham Diering studies how sleep affects synapse strength in the forebrain of mice, which is where most higher thought processes occur and where electrical brain waves are made, the ones that oscillate during the different stages of sleep.

Diering subscribes to the homeostatic scaling theory, which proposes that all of the synapses in the brain are uniformly weakened by the same percentage while we sleep. He says, “We know that neurons in petri dishes have the ability to scale their synapses both up and down when they receive too little or too much stimulation. What we don’t know is whether neurons do this in live animals, and, if so, how.”

The theory behind homeostatic scaling is that an overall strengthening of synapses occurs while an animal is awake as it collects experiences and associations. If all of the synapses on a neuron are at their maximum strength, the neuron has reached its peak firing power and will no longer be able to increase its response to stimuli. If this situation is repeated throughout the brain but never remedied, the brain would struggle to form new memories and might not be able to sift efficiently through old ones. If all synapses are weakened by some uniform amount during sleep, neurons would regain their ability to respond to increases and decreases of incoming signals, while maintaining the relative differences between synapse strengths that create memories.

Diering has compared the abundance of proteins in the synapses of sleeping mice with those of alert mice, with preliminary results that support the overall theory of homeostatic scaling: There are more synaptic proteins in alert mice than in sleeping ones. In addition, several proteins that are known to be involved in strengthening synapses show clear sleep/wake patterns. Diering is hopeful that further research will lead him to molecules responsible for scaling.

For Better or for Worse

Another theory on sleep and synapses is the systems consolidation approach, which sees sleep as more active, more discriminating. Alfredo Kirkwood, a professor of neuroscience, subscribes to something closer to this theory, though he believes that homeostatic scaling and systems consolidation probably both occur—just during alternating phases of sleep.

“Sleep is when the brain organizes the experiences of the day and decides which memories should be reinforced and which aren’t worth keeping,” he says. He believes that synapses that haven’t been strengthened during the day will likely be weakened further, while strong ones will be enhanced, for better or for worse. He likens the result to a library in the morning. During the day, books are coming in and out, patrons are reading books and leaving them around, carts are being filled. Once the library closes, the librarians prepare for the next day by putting things where they belong. He thinks that sleep does something similar for the brain.

It’s possible that these sleep-induced changes are orchestrated by the same neurotransmitters that govern the overall disposition of an animal—scared, expectant, calm and so on. These molecules can greatly affect synaptic strength in entire regions of the brain, and their abundance is known to change with the phases of sleep. For example, during the deepest sleep (REM sleep), acetylcholine is abundant, but dopamine and adrenaline are absent.

To determine the effect of sleep on the mouse brain, Kirkwood plans to measure the strength of individual synapses in slices of the mouse brain before and after specific phases of sleep. Additionally, his group could give the mice drugs that interfere exclusively with one particular phase of sleep. Kirkwood would like to understand what the brain does during sleep so that a treatment can be designed for people whose learning mechanisms are not functioning properly.

Taking Out the Trash

Another process that may occur in the brain during sleep is described by the “taking out the trash” theory, which suggests that sleep enables the brain to remove harmful molecules and clutter that have accumulated throughout the day. This idea is of great interest to Adam Spira, an assistant professor of mental health in the school of public health. He is particularly concerned about poor sleep as a potential contributor to Alzheimer’s disease, since older adults with the disease frequently report significant sleep disturbances. At first, researchers thought that the disease caused the sleep disturbances. But then a correlation was made between poor sleep quality and cognitive decline, and Spira and colleagues began to wonder if maybe poor sleep worsens Alzheimer’s, too.

Along with Mark Wu, an assistant professor of neurology, and researchers from the National Institute on Aging, Spira looked for a link between self-reported sleep habits and brain health in 70 participants in the Baltimore Longitudinal Study of Aging. They found that the brain scans of those who reported shorter sleep duration or more restless sleep showed greater amounts of beta-amyloid. Beta-amyloid is a protein segment that forms clumps in the brains of those with Alzheimer’s and is thought to clutter the brain’s circuitry and contribute to cognitive decline.

More evidence for this theory was published in Science last year by other researchers who found that fluid flow between brain cells increases during sleep, possibly allowing the beta-amyloid to be flushed away.

Spira notes that healthy brains also make beta-amyloid, and its quantity is known to increase with synaptic activity. So, if the homeostatic scaling model is right—if synaptic activity generally increases during wakefulness and decreases during sleep—fewer hours of sleep means higher activity and more beta-amyloid. And interrupted sleep could mean that sleep cycles are not always completed, leading to incomplete reorganization and cognitive confusion.

Whatever the full story is, a better molecular understanding of sleep should motivate us to protect those eight hours of unconscious bliss a little bit better.