The Power Couple of Parkinson’s Research 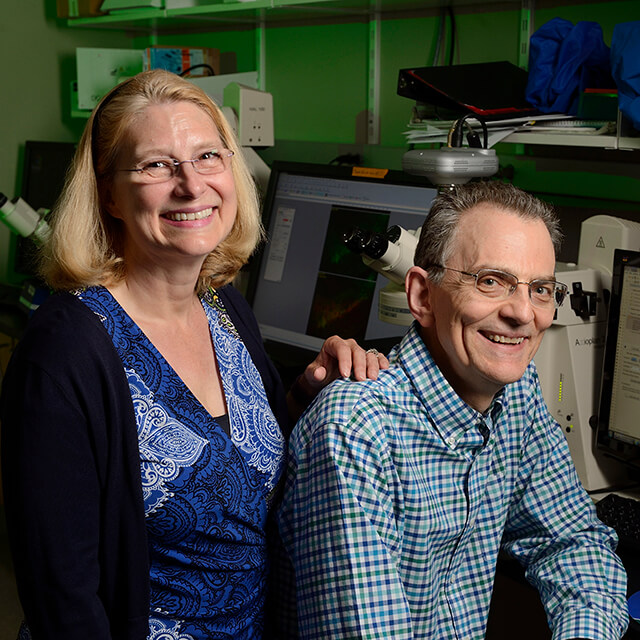 The Power Couple of Parkinson’s Research

June 2018 -- From both sides of the hallway, staff members and students emerge carrying bottles of reagents and Styrofoam boxes laden with materials for the various experiments taking place along the busy lab benches. Large freezers, refrigerators and other boxy machines hum next door. The lab benches are packed with tubes of fruit flies, stacks of notebooks and piles of cells in dishes waiting to be analyzed.

Presiding over this vast scientific kingdom are husband and wife team Ted and Valina Dawson, who have been studying neuronal cell death and neurodegenerative diseases for more than 30 years. Their team now specializes in research on Parkinson’s disease, and the Dawsons are well-known to be leading the field.

Parkinson’s disease is a progressive disease of the nervous system that slowly robs people of their ability to move and think. The first symptoms creep up quietly; bouts of constipation, insomnia and mood changes can be easily missed or disregarded as mere nuisances of advancing age. These early signs slowly give way to tremors—the telltale symptom—as the brain succumbs to the disease.

The human brain is made up of billions of neurons that exchange tiny molecules to send messages throughout your body. The movement of these molecules from one place to the next is essential to who we are. They allow us to walk and talk, construct our memories and inform our very consciousness. However, among all the amazing things these molecules enable us to do, they can also cause disease when things go wrong.

In Parkinson’s disease, one of these molecules, known to scientists as alpha synuclein, begins to clump together. These clumps plug up the neuron until it can no longer trade signals with its neighbors, causing the cell to die. As more and more neurons are lost, the brain develops dead-zones, resembling empty black voids where vital brain tissue has been lost.

It is still unclear to researchers why these proteins aggregate, but most people with Parkinson’s disease begin noticing symptoms in their 60s as these clumping proteins seemingly hit a critical mass. However, the disease has been reported in people as young as 2 years old. More than 90 percent of patients have no apparent family history of the disorder, making any potential genetic risk factors hard to pin down.

Current treatments for Parkinson’s disease address symptoms of the disease, which include stiffness, slowness and mood disorders, to make day-to-day life more manageable, but do nothing to halt the disease’s progression.

“We believe the answer to treating the disease, not just the symptoms, hinges on the discovery of specific targets along Parkinson’s pathways that can be halted with drugs,” says Valina.

The hunt for a way to stop the progression of Parkinson’s disease has led to the discovery of numerous key players that could serve as “stops” along the disease’s path. One such player is the glucagon-like peptide receptor, or GLP1 receptor. GLP1 receptors are widely targeted in treatments for type 2 diabetes to tell the body to make more insulin.

One of the Dawsons’ colleagues, Seulki Lee, a chemist in the Department of Radiology and Radiological Science at Johns Hopkins Medicine, had developed a new drug called NLY01 to exploit GLP1 receptors for use in diabetes treatment, but found it difficult to garner support for a new diabetes drug in such a saturated market. He approached the Dawsons and their collaborator, Hanseok Ko, with the idea that NLY01 may also be effective for treating Parkinson’s patients. Previous studies showed that blocking GLP1 receptors could potentially stop Parkinson’s, though how it worked in the brain remained a mystery.

Seung-Pil Yun in Ko’s lab teamed up with Tae-In Kam and Nikhil Panicker in the Dawsons’ lab to study NLY01s in Parkinson’s disease models. Panicker had been studying astrocytes, star-shaped assistant cells that support the health of the brain. These cells typically chug along happily, helping neurons transmit their messages across the body. However, when confronted with inflammatory signals, they become “angry,” says Ted Dawson. The inflammation “activates” the astrocytes into a revolt against the brain, eating away at the branches that connect one neuron to its neighbors. This structural breakdown contributes to the dead-zones found in Parkinson’s disease, and if these cells can be calmed, scientists could slow the progression of Parkinson’s disease.

So, Yun sought to determine whether NLY01 was protective in animal models of Parkinson’s, and Kam and Panicker set to the task of testing whether the GLP1 receptor drug could stop the astrocytes from activating. After a battery of tests, they found that it worked. The drug effectively connected to the GLP1 receptors in the brain, blocking the activation signals from ever reaching the astrocytes.

“It’s amazingly protective against astrocyte attack,” says Ted Dawson. “A coincidence like this, where two projects fit so perfectly, hardly ever happens.”

Clinical trials of the drug in humans are expected to begin later this year. However, the Dawsons have learned from experience that bringing the drug from laboratory benchtop to clinical application is not always straightforward.

“We were naïve in the beginning,” says Valina Dawson. “A lot of people believe that they’ve made such an important finding that industry will come knocking at their door to fund it,” she says. “In reality, your drug needs to be ready to go into clinical trials in order to get investors interested.”

Previously, the Dawsons identified a drug target that showed promising results for blocking a gene called MIF, which begins the last steps of brain cell death in Parkinson’s disease. They were able to license the technology, which specifically targeted MIF’s ability to break down chains of nucleic acids, to a company that sought to develop it. Four months into what was expected to be a three-year contract to conduct the research, the company abandoned its neuroscience program and the contract, terminating development of an MIF inhibitor with this industry partner.

“At that point we realized the importance of maintaining control of your discovery,” says Ted. “It takes a special set of researchers and investors who are believers and passionate about their technology.”

With their own funds, the Dawsons, Ko and Lee co-founded Neuraly, a biotechnology company under which they assembled their own group of committed individuals to bring discoveries from the lab to clinical trials. They are currently focused on the GLP1 drug NLY01, and will develop other promising targets as well. 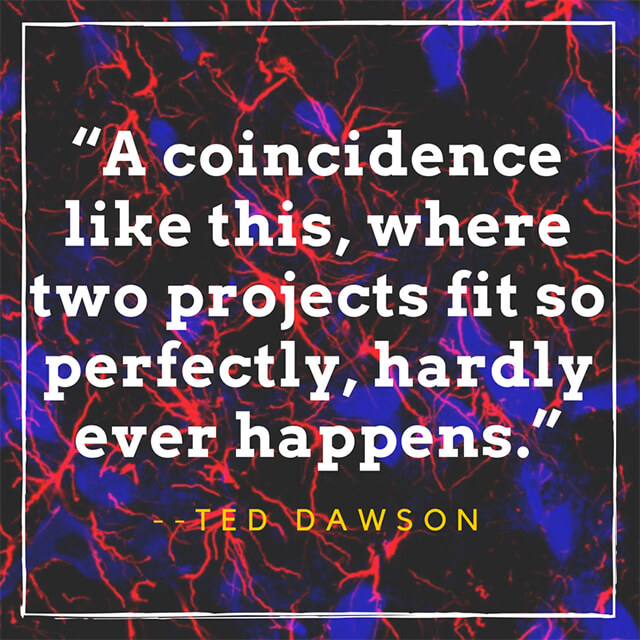 Neuraly has raised $35 million in support of its research and is preparing for clinical trials expected to begin later this year.

The search for funding and working out collaborations with researchers around the globe remains challenging, but the pair asserts that this is the only way forward.

“You may hit some landmines,” says Ted, “but our goal is to really make things better. Not to just understand the basic science, but to find ways to get our discoveries to the people who need them.”


Clinical trials on Parkinson’s disease drugs must rely on crude clinical assessments of patients’ impairment and symptoms, making them exceptionally large, lengthy and costly. Approved Parkinson’s drugs do exist, but they only treat the symptoms of the disease without affecting its progression. To truly combat the disease, researchers need to be able to measure its severity with biomarkers.