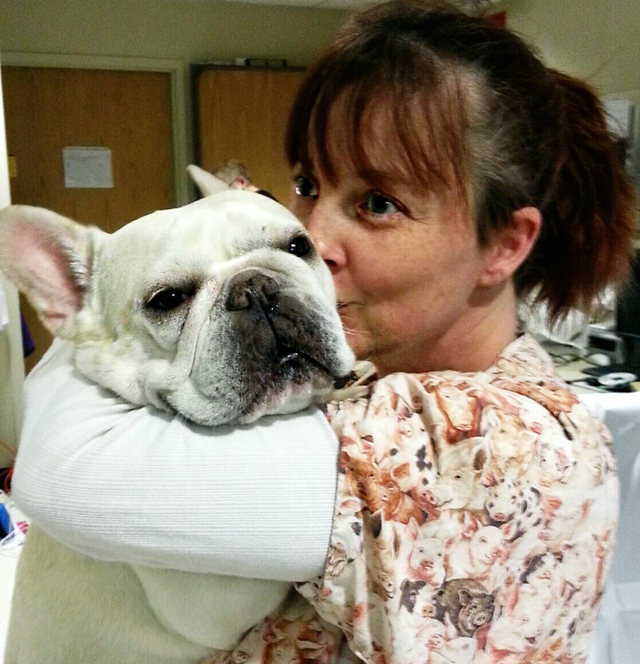 March 2015—When Rebecca Krimins tells new acquaintances about her job, she sometimes has to repeat herself a few times. “People don’t believe I’m at Hopkins and working on animals,” says the veterinary anesthesiologist. “I have to tell them two or three times.”

The confusion is understandable: The Johns Hopkins University School of Medicine, an institution associated for 126 years with top-flight human medicine, ventured less than two years ago into veterinary care. In doing so, those involved in the new program aim to advance care not only for pets, but ultimately for people.

Johns Hopkins’ Center for Image-Guided Animal Therapy began in fall 2013 as a place where local veterinarians could send animals in need of advanced imaging procedures. Dara Kraitchman, a professor of radiology and a veterinarian, started the program partly out of a desire to extend the benefits of medical advances to furry patients. Veterinary offices generally lack expensive MRI and CT machines; some hospitals allow after-hours pet imaging, but The Johns Hopkins University’s research-dedicated facilities are the most powerful available to vets in the Baltimore/Washington area, Kraitchman says. These facilities are different from the clinical facilities in The Johns Hopkins Hospital but have similar levels of state-of-the-art, advanced imaging equipment.

In practical terms, access to more powerful imaging often means diagnosing or treating a pet without having to open up the patient. For example, Kraitchman can use CT and ultrasound to locate a mass precisely enough to collect a biopsy sample with an inserted needle, with no need to make a large incision and find the mass visually. She and her colleagues also use imaging to guide certain minimally invasive surgical procedures, such as inserting stents and freezing away problematic tissue.

But the center’s assets go beyond top machinery and Kraitchman’s expertise. When Krimins came on board last September, she became the only veterinary anesthesiologist in all of Maryland. “Most of our patients are very sick, so it’s best to have a specialist to do the anesthesia,” she explains.

Owners can’t bring their pets directly to the center; rather, Kraitchman and Krimins work with area veterinarians, including specialists, to identify patients who could benefit from the center’s services. “We’re looking not to compete but to partner with specialists around us,” Kraitchman says.

Kraitchman’s ambitions for the center go beyond improving veterinary care locally. Since 1999, she has been helping to develop new interventional cardiology and interventional radiology procedures at The Johns Hopkins University, and she saw the potential to “give something back” to the veterinary profession, she says. In addition to developing protocols that translate advanced imaging procedures from people to pets, she wants the center to carry out studies needed to get new drugs and devices to market.

Dara Kraitchman and a colleague perform an ultrasound on a cat.

Such studies could ultimately benefit human as well as veterinary patients. “We have a lot of things that look promising in animal studies, and then 70 percent or more fail to make it through to a commercial product,” Kraitchman says. Part of the reason for that, she suggests, is that lab animals with artificially induced disease may be a flawed model of human disease. But “if an animal has spontaneous disease—obesity, for example—they often have the same confounding factors humans do,” such as diabetes or high cholesterol. This could make them a better model for how a therapy will work in similarly complicated humans.

The center is beginning a study to test whether imaging can detect impending heart failure in dogs predisposed to the condition so they can be treated accordingly. And soon, they hope to launch a trial of a long-acting pain medication, a project Krimins finds particularly exciting. “For some animals, that would be incredible,” she says. “It’s very rewarding when I can help patients live a pain-free lifestyle.” 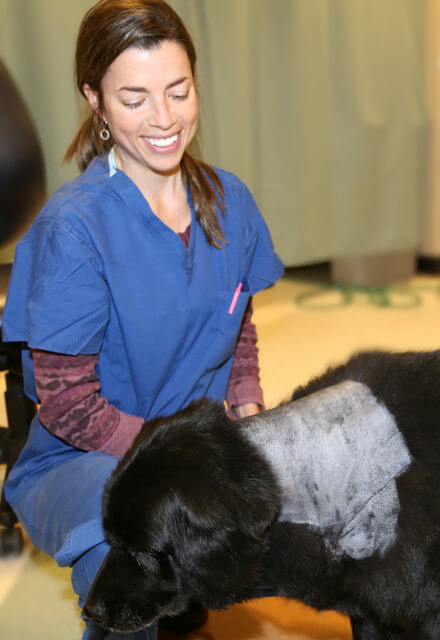 Rebecca Krimins with a patient

The Future of Veterinary Care

On a recent afternoon, in a basement on the edge of The Johns Hopkins University’s medical campus, a cat named Coraline got a CT scan. The 14-year-old tabby with striking green eyes had a mass in her chest that her vet couldn’t identify, and her weight had dropped to just over 7 pounds.

Krimins, a vet tech and Kraitchman, working with assistance from interventional radiologists, spent about an hour imaging and biopsying the mass as Coraline was kept safely under anesthesia. Chest masses in even human patients carry a large risk of lung collapse. Fortunately, Coraline went home that evening with only a shaved strip on her back and a tiny incision to tell the tale of her adventure.

Depending on her biopsy results, Coraline may or may not have healthy years still ahead of her. It is only through programs like the center, Krimins says, that treatment options will be expanded for animals like her. “We need to publish studies; that’s how we push veterinary medicine ahead,” she says. “The research is very exciting to me because I want our care in veterinary medicine to become comparable to that of human medicine.”