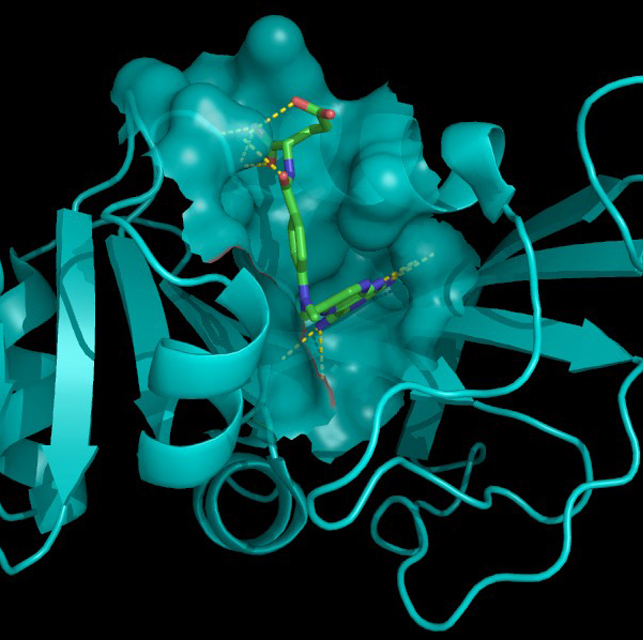 A structural model of a protein with a drug bound.
Source: Fdardel

June 2012— Johns Hopkins and dozens of other research universities are trying a new approach to drug research. Rather than restricting their participation to the fundamental first stage of drug research, the traditional role for academia, these universities are participating in more of the downstream segment. In these programs, veteran drug industry professionals now work shoulder to shoulder with basic scientists.

One example is the Johns Hopkins Brain Science Institute NeuroTranslational Drug Discovery Program, which aims to translate the neuroscience discoveries of Johns Hopkins scientists into drugs for neurological conditions such as schizophrenia, brain cancer and neuropathy.

BSi has recruited more than 20 pharma professionals to staff the program: drug metabolism and pharmacokinetic experts, medicinal chemists, pharmacologists, toxicologists, experts in business development and drug licensing, and others.

The NeuroTranslational Program division director is Barbara Slusher, who holds a doctorate in pharmacology and molecular sciences from Hopkins and joined the Institute in 2009 after 18 years of leading research and translational development in the drug industry. “Drug discovery is an interdisciplinary enterprise,” says Slusher. “You need a team. Now that team is being put on Johns Hopkins’ campus.”

University scientists have discovered a wealth of potential drug “targets,” proteins or cell structures essential for important biological pathways. At the same time, drug companies possess massive compound libraries, collections of candidate drugs that just might “hit” one of those targets and elicit a health benefit. So the trick, says Slusher, is to marry the two—to identify a drug that will strike a particular target.

Historically, the academic scientist’s role would end with the discovery of a target, says Slusher. The scientist and university would obtain a patent for the target. A drug company then would pay the university to license the use of the target.

From there, the company could proceed with the next stages of  research and design: create a test to screen large numbers of candidate molecules and identify those that alter the target in a favorable way; vary the candidates’ chemical properties to improve their potency, solubility, or other features; and conduct animal tests and, finally, clinical trials. Because the drug company assumed most of the risk in developing new drugs (no candidate drug is a sure bet), it also received most of the profits from any drug that made its way to market.

This model for drug research worked well for many decades and yielded many of today’s most popular drugs. But now economic factors are driving drug industry leaders to experiment with new approaches.

“The industry is investing more than three times as much as a decade ago to produce less than half as many new products,” says Slusher.

Drug industry reports show that the cost to develop a drug can reach as high as $2 billion. In addition, drug companies are now experiencing what the industry calls a “patent cliff,” the expiration of patents on a broad range of highly profitable drugs such as Lipitor, Plavix and Effexor. The change will give patients access to lower-cost generics but also reduce drug industry revenue by tens of billions of dollars.

At the same time, research universities are struggling with their own tight budgets and facing greater demand from funders to translate their research into useful therapies.

In the last three years, more than a dozen of these master collaborations have been established, according to Slusher. More universities are also establishing drug discovery centers, such as BSi’s. The number has grown from 10 in 1995 to more than 75 today, says Slusher, citing a report in the journal Nature Reviews Drug Discovery. (As a forum for these centers to exchange their ideas, challenges, and best practices, Slusher and the BSi team are spearheading the establishment of a new National Academic Drug Discovery Consortium [ADDC]. (The ADDC website will go live in the fall, ADDConsortium.org.)

Funding sources for these centers may include the National Institutes of Health and disease foundation grants as well as pharmaceutical industry support. In BSi’s case, a $100 million philanthropic gift from an anonymous donor helped to launch the Institute. Within two years, the BSi drug-discovery group brought in more than $10 million in NIH grants and pharma-research sponsorships to support its translational efforts. BSi also has initiated four pharma partnerships and recently spun out a new company to develop Hopkins’ technologies.

For example, Slusher recently arranged a collaboration between BSi and the Japanese-based drug company Eisai that will involve high throughput screening, an automated method for quickly screening large numbers of candidate drugs. One of the first projects for this collaboration stems from studies performed by Johns Hopkins neuroscientist Xinzhong Dong.

Ten years ago, Dong discovered a unique set of protein receptors in sensory nerves that are involved in the sensations of pain and itching. In the new partnership, Dong, BSi scientists, and Eisai will search for drugs that alter these receptors in ways that alleviate these symptoms.

Under the arrangement, Eisai will screen its drug library for molecules that can hit Dong’s protein receptors. The company will share those drug candidates with Dong and BSi scientists, who then will carry out further stages of the research, including medicinal chemistry optimization, pharmacokinetic evaluation and testing of promising molecules in animal models. Eisai then will have first rights to license the resulting drug candidates from Hopkins for commercialization. Dong says he is eager to participate in the collaboration. “I cannot do the screening myself,” he says. “It is very expensive—probably more than $1 million to screen a target like this.”

Slusher calls this arrangement a “shared-risk model.” Both Eisai and Johns Hopkins share the risk of investing in a drug strategy that may or may not work. The approach entails a greater degree of risk than the institution traditionally carried but also offers potentially greater rewards. “When you license a target to a pharmaceutical company, your downstream benefits are limited,” says Slusher. “However, if you can license a product—a small molecule drug therapy, for example—it is much more valuable.” The difference in the bottom line can be millions of dollars.
But will such new modes of operation work?

Slusher acknowledges that the concept faces many challenges. As her past three years leading the project have reminded her, academia and industry are two very different cultures. In the drug industry, a large team of people in diverse specialties work together toward a common goal. Academia is more of an individualistic endeavor, where publications and grants, more than entrepreneurship, have traditionally marked success.

Moreover, as some basic scientists point out, academics are used to working in an unfettered intellectual environment. Many important medical innovations grew out of research that appeared to have no practical relevance, including some, such as penicillin and Viagra, that were purely serendipitous findings, says James Stivers, professor of pharmacology and molecular sciences. “Nobody can tell what will give rise to the next breakthrough,” he says.

Indeed, Slusher says she’s learned to appreciate that this new approach to drug discovery, like the conventional approaches, will take time. In the past two years, she has met individually with about 120 faculty from throughout Johns Hopkins who are doing neuroscience research. “Initially, I thought all scientists would be interested to translate their findings into therapies,” says Slusher. She found that only about half were. Of those, only a small number had novel druggable targets that might interest a drug company. And of those, Slusher identified four, including Dong’s project, that were ready for an integrated drug discovery team.

Like any experiment, the BSi drug discovery program involves a degree of uncertainty, says Slusher. Will this approach better serve humanity with new and superior drugs? Will the model be economically sustainable? Slusher says she has reasons to be optimistic, particularly the fact that the model taps into the strengths of industry and academia, which could work together synergistically.

“The verdict is still out on whether the new model will work,” says Slusher. “But we have many reasons to believe that it will.”