Surviving the Valley of Death 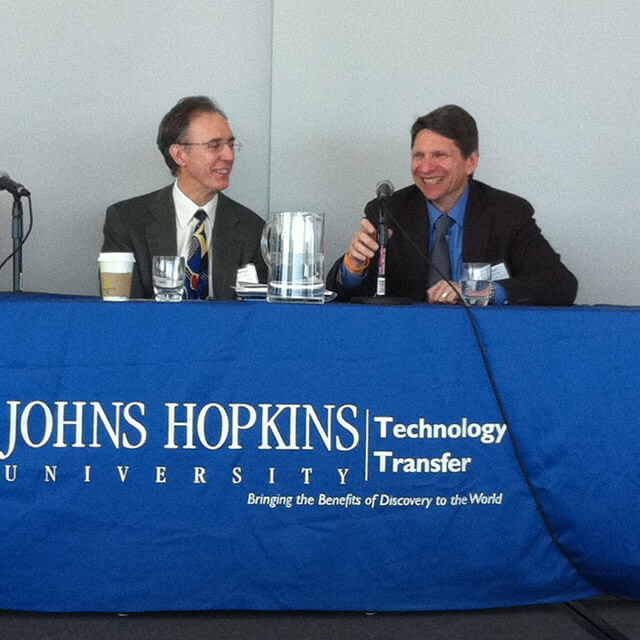 Surviving the Valley of Death

March 2014—Whether it refers to the high casualties sustained in the 1854 Battle of Balaclava or the literary element used in Psalm 23, the Valley of Death is obviously not a place one wants to be. In the research world, the term refers to that place between the lab bench and the marketplace where many good biomedical ideas wither away and die. It exists, in part, due to a gap in funding: Grants from the largest funders of biomedical research generally focus on basic research, but most basic science discoveries require further testing through expensive animal or clinical trials before industry investors will commit.

To decrease casualties in the Valley of Death, The Johns Hopkins University created a team in 2003 called the Johns Hopkins Alliance for Science and Technology Development, often referred to as the Alliance. The goal of the Alliance is to provide faculty members with the resources they need to bring their ideas to market.

It began as a small group of high-level executives from industry who volunteered their time to help faculty members commercialize their inventions. It has now grown to nearly 50 members, including venture capitalists, CEOs from biotech and pharmaceutical companies, and other high-level entrepreneurs.

One of the greatest ways they help the faculty is by weighing in on whether an idea has market potential and is worth pursuing. Christy Wyskiel, the current chair of the Alliance and a senior advisor to Johns Hopkins University President Ronald J. Daniels, says, "The support of an Alliance member for a particular technology can provide our faculty members with the assurance that working on its commercialization is a good use of their time, in that it addresses an unmet need and is relevant in the marketplace."

The members of the Alliance board also help faculty navigate the quagmire of legal regulations involved in patenting and licensing an idea and creating and incorporating a company. They can help with the business side of things, too, including making the right investments, hiring the right people and marketing a new product appropriately. Sometimes the help they give is as simple as sharing their extensive Rolodexes to help faculty members network with those who can help. And sometimes they invest in a technology themselves.

The major focus of the Alliance team is an annual, all-day event that brings together faculty and dozens of industry partners. The events used to be exclusive to Johns Hopkins faculty, but they have been held with the University of Maryland, Baltimore since 2008. Helen Montag, who has been helping to manage the Alliance and its activities since its inception, says that a joint meeting was a natural next step, considering all of the individual faculty collaborations between the two medical campuses.

This year's event, held Feb. 18, brought in 41 faculty speakers from The Johns Hopkins University and 14 from the University of Maryland, Baltimore, who presented a total of 29 new inventions. Twenty-two Johns Hopkins University Alliance members attended, in addition to more than 60 other industry guests from the universities’ networks. The event buzzed with energy as participants chatted about their ideas and experiences in between presentation sessions.

Each faculty member presented his or her work in 20 minutes and was scored by industry partners in the audience based on their proposal’s clinical potential, scientific novelty and ability to use the award money effectively. At the end of the day, the scores were tallied, and four $50,000 awards were given: two BioMaryland Leading Innovative Faculty Entrepreneur (LIFE) awards and two Abell Awards.

Britz, a former postdoctoral fellow at the Johns Hopkins University School of Medicine, spent 25 years in industry and started several of her own companies before moving into government. Part of her current mission is to increase the entrepreneurial activity of Maryland's universities.

“Maryland research institutions attract over $12 billion in federal funds each year,” she says, “but the number of spin-off companies that result is much smaller than you'd expect from so much high-level research.” Once Johns Hopkins partnered with the University of Maryland, Baltimore, Britz, a former Alliance member, saw an opportunity for the state to encourage the collaboration and to work with the universities toward their mutual goal.

And the Winners Are…

This year’s BioMaryland LIFE award winner from Johns Hopkins was Jonathan Powell, an associate professor at the Johns Hopkins Sidney Kimmel Comprehensive Cancer Center. Powell identified a protein that promotes insulin sensitivity in mice and represents a potential new treatment for type 2 diabetes. The protein also has the potential to improve the body’s ability to lose weight when on a controlled diet.

This year’s Abell Award winners were Chad Gordon and Nita Ahuja, both of Johns Hopkins. This was the second year that the Abell Foundation, a philanthropic organization native to Baltimore, contributed awards for the event. Last year’s winners were both from Johns Hopkins, too.

Chad Gordon, an assistant professor of plastic and reconstructive surgery, won for his computer-assisted navigation system that aids surgeons in planning and performing complex head and neck surgeries, such as face-jaw-teeth transplantations. A collaborative project with Walter Reed and the Johns Hopkins University Applied Physics Laboratory, it was inspired by Gordon’s desire to improve outcomes for his patients, who often required revision surgery. The project uses CAT scan data and real-time calculations to optimize the alignment of the new tissues with the patient’s facial structure. Doing so decreases mistakes and time in surgery, and it improves aesthetic outcomes. 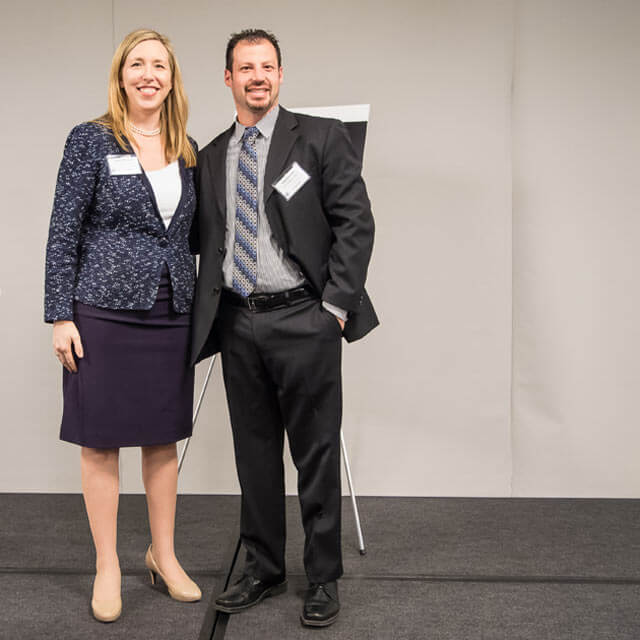 Gordon says he was in shock when he heard about his win. “I am incredibly grateful for the mentorship and support my team received from the tech transfer office and the Alliance,” he says. “With this award, we now have the bridge funding needed to get this software into surgeons’ hands to help civilians and wounded warriors who have suffered devastating injuries to their faces.”

Johns Hopkins’ other Abell winner was Nita Ahuja, an associate professor of surgery and director of the Sarcoma and Peritoneal Surface Malignancy Program. She developed a simple, repeatable blood test to detect pancreatic cancer using a genetic screen for high-risk patients. Her prize funds will go toward validation studies in cancer patients and healthy people.

Also a first-time participant in the Alliance meeting, Ahuja says she came in with no expectations and feels honored to have won the award. “As a clinician, I want to see this test used more widely, for the benefit of patients, but I’m an academic and need industry partners to bring it to market,” she says. “Kudos to Johns Hopkins for bringing together some really smart people on the cutting edge of science to give us the support we need.”

Of course, $50,000 may not be enough to bring the winners’ projects all the way to the market, and those researchers who didn’t win an award have even farther to go. But they are not left empty-handed. Many faculty members take away valuable lessons about pitching their work to non-academics that they can use when approaching potential investors in the future. Others received important feedback about which experiments need to be planned to obtain FDA approval. And others may be approached by individual industry partners who have taken special notice of their project and want to meet with them privately to develop the idea.

While the Valley of Death may always be a reality for academics, the Alliance is making great progress in reducing the number of its victims.

The recent violence and political maneuvering over the fate of Crimea are nothing new. In 1854, a different battle raged there between allied British and French forces and the Russian Empire. The Battle of Balaclava was made famous by Alfred, Lord Tennyson’s poem “The Charge of the Light Brigade,” in which he tells of the more than 650 British cavalry men who boldly charged against Russian artilleries into “the valley of Death.”