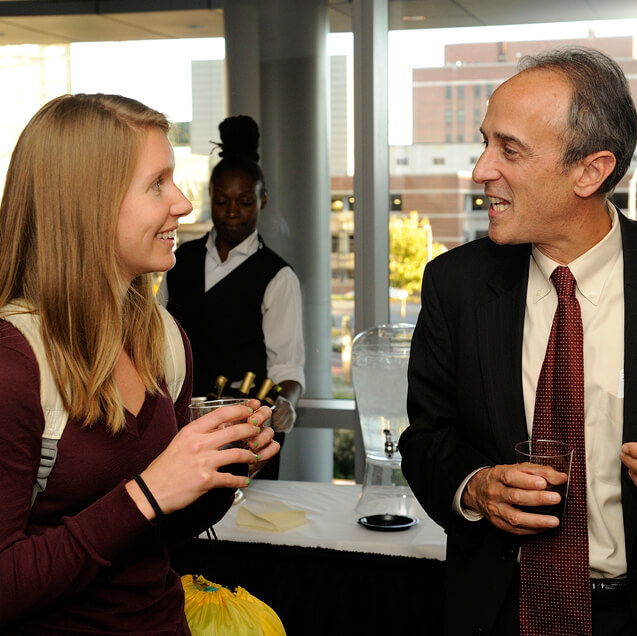 Vice Dean for Education Roy Ziegelstein talks with a student after the inaugural Partnering Toward Discovery seminar.
Credit: Will Kirk

September 2013—In his welcoming remarks to this year's cohort of graduate students at the Johns Hopkins University School of Medicine, Roy Ziegelstein, M.D., vice dean for education, told attendees, “When most people think about a career in science, I think they think that the scientific stage—the place where science is generated—is the lab bench, but that’s wrong, If it were right, it wouldn’t matter if you were at Johns Hopkins or anywhere else doing your research. Benches are the same everywhere.”

Why come to the Johns Hopkins University School of Medicine for a master’s or a Ph.D., then? For the people, Ziegelstein says.

“Where science is really created is sitting at The Daily Grind and meeting someone from another lab and getting new ideas, or connecting with a clinical fellow and seeing the implications of your work, or brainstorming over your data at lab meetings,” he says. “Science comes from people, and the amazing group of people assembled here at Johns Hopkins isn’t replicated anywhere else in the world.”

But great people are like raw ingredients: They are necessary but insufficient for creating a culinary masterpiece worthy of The Food Network. A great recipe and a good chef are also required. Ziegelstein has been our “head chef” since April of this year and he has some fresh ideas about how to tweak the current “recipe.” Supporting him are other faculty members and students who seek to improve the recipe through such means as increasing opportunities for graduate students and medical students to connect with each other; bringing new teaching techniques to the classroom; and providing more opportunities for students to explore nonacademic careers.

“Twenty-five years ago, being a successful graduate student meant staying within academia,” says Ziegelstein. “Now, we realize that students who graduate from Johns Hopkins can have a very successful career and contribute to society in many different venues. We have to evolve to meet this new reality and transform the way we think about graduate education.”

Geraldine Seydoux, Ph.D., is a professor of molecular biology and genetics and the current chair of the M.A./Ph.D. Committee, which oversees each of the school of medicine’s 18 graduate programs, making sure that graduate student needs are supported. Seydoux agrees with Ziegelstein that one of the most pressing issues for biomedical graduate students today is the lack of preparation they have for nonacademic jobs. “By necessity, all graduate students are mentored by professors who have followed the academic track,” she explains, “so rarely do they have any ‘alternative’ experiences that they can share with their students. We hope to be able to create different avenues to provide that guidance.”

One of those avenues is being created by CIGBE, the Center for Innovation in Graduate Biomedical Education, started in 2012 and now under the direction of Peter Espenshade, Ph.D., professor of cell biology. The center aims to improve graduate biomedical education over the long term by rigorously testing new ideas. Changes to the curriculum or even to the very structure of graduate studies would first be researched and systematically tested by faculty whose expertise is education and learning. Successful ideas would then be implemented here and shared with other institutions.

While there is no bricks-and-mortar CIGBE space yet, it is already providing improved career education and opportunities for SOM graduate students through a program called the Biomedical Careers Initiative (BCI). BCI's website will be the go-to place for students who want to learn about internships, informational interviews and other opportunities to explore science policy, science journalism, patent law and other careers that are enhanced by a strong foundation in scientific research. The program also includes a Career Seminar Series that gives Ph.D. students a broad overview of potential careers.

“The scientific landscape is changing rapidly and we have to be able to change along with it,” says Espenshade. “We want to envision what biomedical education needs to be in 10 years and implement that now.”

One innovation already in place in Johns Hopkins classrooms addresses a universal issue created by lecture-style learning: Professors are only aware of their students’ confusion when the students themselves are aware of it. If a professor has given an explanation that was misleading, he or she won’t find out until all of the students learn it the wrong way and get answers wrong on the test. That’s too late, says Seydoux, who welcomes this new technology. Now, by giving each student a “clicker,” professors can ask for a live poll of their audience just like the game show contestants on Who Wants to Be a Millionaire.

Seydoux plans to redesign each of her genetics lectures to revolve around in-class exercises that encourage participation, problem-solving and collaboration, which are all skills needed in scientific research.

As she explains it, “the clickers allow us to go back to the Socratic method of teaching without the need to pare down our class size to just a few students per professor, which would be impossible. This way, I can find out how my students are thinking, catch their mistakes right away and find better explanations.”

With more than 900 graduate students here, plus nearly 500 medical students, fostering unity is not an easy task. One of the entities that works toward that goal is the Graduate Student Association (GSA). Its current president is Rosie Jiang, a third-year Ph.D. student studying the human papilloma virus and ovarian cancer in Richard Rodens’ laboratory.

Jiang is particularly excited about two new initiatives that Ziegelstein is encouraging. One is modernizing the second floor of the Welch Library to create space for graduate students that’s more useable for research and learning in today’s day and age and more conducive to gatherings. The West Reading Room, home to the famous painting of the four founding doctors of Johns Hopkins, will maintain its classic “historic feel” to accommodate quiet studying and private reflection during the day and catered events after hours. The East Reading Room will have a “library feel” and will be designed as group learning space, with mobile chairs and tables that can be rearranged as needed.

Jiang says that currently there is no common space for graduate students from different programs to study quietly or in groups. “The new space will allow for ‘cross-pollination’ between programs,” she explains. “It will encourage the sharing of ideas and experiences between students who don’t currently interact much.” (Renovations are set to begin at the end of October and could be expanded to other areas of the library once the school gets a better idea of how the graduate community uses the second-floor space.)

The other initiative is a new monthly seminar series, “Partnering Toward Discovery,” that is designed to bring together M.D. and Ph.D. students. Ziegelstein likens the previous relationship between these two groups, which used to study in the same building, to that of a young married couple with little money and a small dining room table. “They talk about everything over dinner and are totally in tune with each other,” he says. “But as they become more established and their finances improve, their dining room table lengthens until they are quite far apart from each other and rarely converse anymore.”

In this case, the dining room table expanded greatly with the 2009 opening of the gleaming new Armstrong Medical Education Building, located several blocks away from the graduate students’ laboratories and classrooms. Ziegelstein hopes that the seminar series will help shorten the dining room table because some of the best innovations in patient care come from discussions between basic researchers and clinicians as they share their specialized knowledge and the challenges that they face and then brainstorm together to find a better way.

Together, Ziegelstein, Seydoux and Espenshade aim to ensure that this collaborative environment is not just maintained, but enhanced. As Ziegelstein says, excelling in biomedical graduate education is just one manifestation of “the constant, unwritten, omnipresent message that pervades the Johns Hopkins culture: that we are here to be great so that we can be of maximal service to the world.” 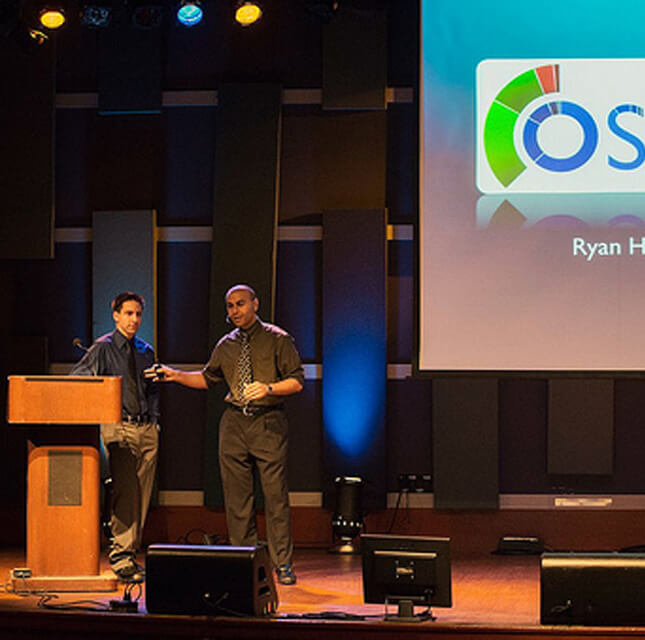