Pulling Back the Curtain on Autism and Schizophrenia 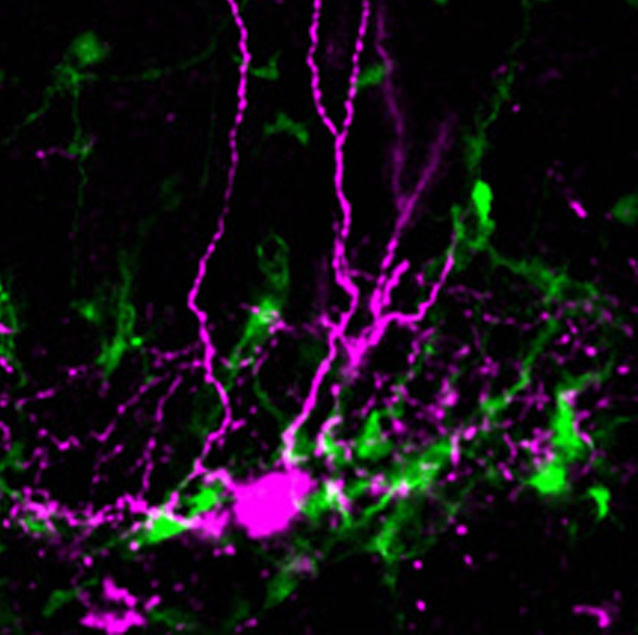 Pulling Back the Curtain on Autism and Schizophrenia

May 2014—Neuroscientists have long been puzzled by schizophrenia and autism, and for good reason: Each has a host of genetic and environmental causes. Two Johns Hopkins researchers working to understand the biological causes are Aravinda Chakravarti, a professor of medicine, and Hongjun Song, a professor of neurology and neuroscience.

To make sense of the many genes associated with autism, Chakravarti’s group focused on families with many autistic members, specifically females. Girls are four times less likely to have autism than boys, so the researchers reasoned that these families might carry autistic-linked genetic variants with especially strong effects. Indeed, when they compared the affected families’ genomes to those of people without autism, they found several variations in the gene Delta 2 catenin that seemed likely culprits in the disease.

Delta 2 catenin, or CTNND2, is implicated in brain development and cancer formation. Working with zebra fish and mice, Chakravarti’s team found that when the gene mutates, the brain has trouble making the connections necessary for normal, everyday cognitive function.

He and his team have also studied the specific effects that autism and a mutated CTNND2 gene have on neurons, illustrating exactly how and where the neurons misfire. The research is helping identify the root causes of autism, as well as how Delta 2 catenin interacts with other proteins to contribute to the condition.

Hongjun Song, a member of the Johns Hopkins Institute for Cell Engineering, is interested in the development of the adult central nervous system and how abnormal development can lead to mental illnesses such as schizophrenia.

“Stem cells are a blank microchip in our bodies that can be programmed to perform particular tasks,” Song says. He explains that in the hippocampus section of the adult brain, stem cells generate about 1,400 “newborn neurons” per day. Work in his and others’ laboratories has linked poor regulation of this new growth to mental illness.

Song’s group has used data from genomic studies of people, together with animal experiments, to link some schizophrenia- and autism-associated genes to their effects on newborn neuron growth. Their results reveal how newborn neuron behavior is affected not only by genetics, but also by a host of other factors such as exercise, learning, stress, aging and antidepressant use. By improving understanding of the biological underpinnings of mental illness, Song’s research is providing new leads in drug development.