Need A Hand? There’s A Printer For That 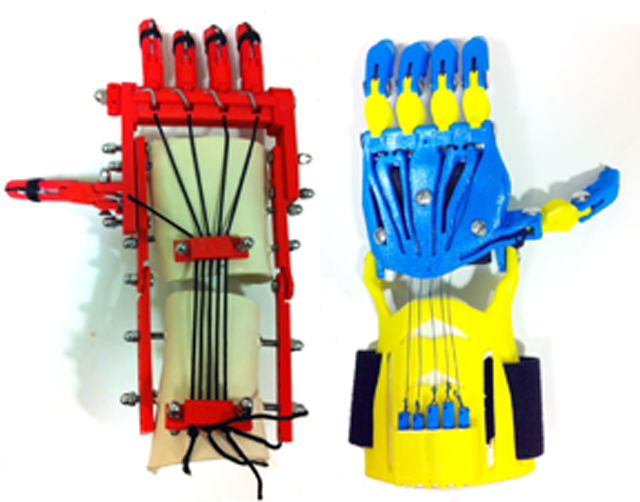 An early prototype of a 3-D printed hand (left) and a newer version (right).

Need A Hand? There’s A Printer For That

September 2014—As a trauma surgeon with a background in biomedical engineering, Albert Chi is on the forefront of designing high-tech artificial limbs, or prostheses, that allow patients to move individual fingers just by thinking about them. Thus he was troubled to have little to offer the parents he met several months ago at the Kennedy Krieger Institute—parents whose children were born with limb deficiencies and whose insurance companies declined to pay $50,000 for a prosthesis that would only fit the growing kids for a few months.

Unwilling to leave the families with no hope, Chi grasped at something crazy a friend had posted on Facebook just that morning: plastic hands with moveable joints and fingers that grasp were being made for less than $50 by people with 3-D printers. He said he would look into it for them. This began his exploration of a technology that is adding another dimension to the work of a diverse group of researchers across The Johns Hopkins University.

A quick Internet search brought Chi to the e-NABLE website. In no time at all, he was hooked. He bought a $2,600 printer, scheduled a meeting with e-NABLE’s founder Jon Schull to learn the tricks of the trade, and was up and running.

Chi will be a guest speaker at the conference Prosthetists Meet Printers, being held at Johns Hopkins on Sept. 28. The printers in question are both printing specialists and the machines themselves that use plastic "ink" to create three-dimensional objects. The all-day event is sponsored by a nonprofit group called e-NABLING the Future, a network of 3-D printing experts who volunteer their time to make hands for those without them. In addition to sharing ideas for making better hands, the 3-D printing and prosthetics experts at the conference will be meeting with kids from underserved areas and printing prosthetic hands for them in their favorite color. (Watch five year old Griffin receive his new glow-in-the-dark hand.)

Chi lights up as he describes the benefits of 3-D printed hands. “They don’t require wiring, electricity or advanced computer algorithms,” he says. “They are powered by the natural flexing of muscles and some thin bungee cords and fishing line.” The only special material required is medical-grade padding. His group now prints even the joint-connecting screws out of plastic, in part to protect siblings during roughhousing.

Each hand takes just 10 to 15 hours to print, and all of the plans are downloadable for free. Not only are the hands fast to make, they are more intuitive for patients to figure out than the high-tech prosthetics, which require months of physical therapy. To test his first printed hand, Chi chose an adult patient, who could thoroughly describe his experience. He was so satisfied that he now volunteers in Chi’s “print shop” to make hands for needy kids.

Though the hands are not capable of complex movements, only of grasping and letting go in response to flicks of the wrist, they make a big difference psychologically, socially and biologically. “When kids are fitted with a prosthesis early, they become comfortable with the concept, their muscles don’t atrophy from lack of use and their brain pathways for governing movement develop properly,” Chi says.

Coming Soon to a Tabletop Near You

While 3-D printing may seem a bit sci-fi, it has actually been around since 1987. No longer a technical novelty, there are commercial, do-it-yourself shops popping up all over the country in addition to Amazon’s online services.

Niel Leon oversees two 3-D printers in the Johns Hopkins University Whiting School of Engineering’s Advanced Manufacturing Laboratory, where he was worked for the past three and a half years, helping faculty and students design and execute their projects. He has been working with 3-D printing since 1992, when it was called stereolithography and involved shaping a pool of liquid plastic with a laser.

The primary method now, called fused deposit manufacturing, is much faster. “We printed half a dozen prototypes of a device to assist the insertion of needles for a group seeking FDA approval,” recalls Leon. “We finished in a few weeks what used to take three months.”

The current method is also safer. It begins with a spool of plastic “thread” that melts when it enters a hot printer head, reminiscent of a hot glue gun. The first layer is deposited on a sheet of special paper. Subsequent layers are added until an object emerges whose size is limited only by the size of the printer. The largest at Johns Hopkins makes objects up to 14 inches by 16 inches by 16 inches.

Leon collaborates with people all over the Johns Hopkins community on projects from visualizing black holes to Chi's high-tech prosthetics. Recently, he worked with Warren Grayson, a biomedical engineer at the school of medicine whose research focuses on building three-dimensional segments of bone to repair injured skulls and jaws.

“Traditional titanium plates often wear down the surrounding tissue over time and don’t integrate well with the native bone,” says Grayson. “We are hoping to build a more organic solution.”

For that reason, Grayson's projects are quite complex. Their goal is to eventually be able to “print” a porous, biodegradable scaffold in just the right shape based on CT scans from a patient. They would then fill the scaffold with a gel mixed with bone-building cells from the same patient and implant the structure right away.

Ideally, the body will gradually incorporate the implant and the cells inside will develop as required, but some molecular encouragement is helpful. Right now, the biggest challenge is getting blood vessels to quickly grow into the center of the structure to bring oxygen and nutrients to the cells inside. To boost this process, the team is trying different tricks, like attaching pro-growth proteins to the molecules of the cell-containing gel.

The most advanced 3-D printing technology is being used experimentally to engineer softer tissues, like the liver and heart. Because live cells are part of the “ink,” the printers have to be kept sterile and at the right temperature. They are quite expensive, but Grayson is hoping to get one soon. “You just mix the appropriate cells into a gel that becomes stiff at body temperature and then print the shape you need,” he says. Though far from clinical applications, these three-dimensional tissues are being used in laboratories to test which cells, gels and other ingredients work best for reconstructing a given tissue or for predicting how a whole organ might react to a given drug, for example.