Middle-Author Publications: Do They Matter for Promotion? 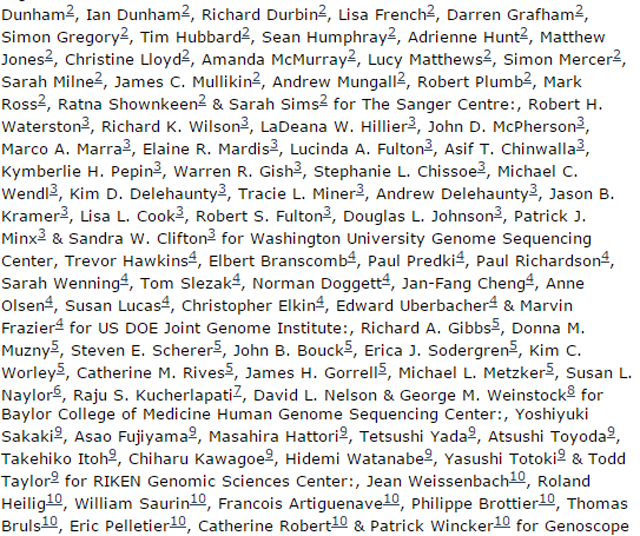 Middle authors on the publication of the human genome in 2001

Middle-Author Publications: Do They Matter for Promotion?

January 2013—The average number of authors on papers included in the Science Citation Index increased by about 50 percent between 1990 and 2010, according to data from Thomson Reuters, which means that middle-author contributions are on the rise. Original research articles on which a faculty member is first author, meaning he likely performed the majority of the experiments and wrote the article, or last author, meaning he led the research, tend to be the most heavily weighted publications when it comes to getting promoted. So how important are middle-author contributions when a scientist is up for promotion through the tenure track?

“They absolutely matter,” says Justin McArthur, director of the Department of Neurology and chair of the Professorial Promotions Committee at the Johns Hopkins University School of Medicine. “A lot of science is now done as team-based science. You sometimes have, for example, genetics publications with many more authors than there were patients in the study.” That means that most of the authors must be middle authors.

According to McArthur, one area in which a candidate’s middle-author publications tend to count for a lot is multi-institutional clinical trials. Scientists from each institution usually play key roles in these trials. Hence, even if they end up as middle authors on the research articles describing these trials, their contributions will likely have a significant impact, and will be viewed favorably by a promotions committee.

Middle-author research articles can also matter in other biomedical fields, but only if a candidate for promotion has made a significant intellectual contribution to the published studies, according to Estelle Gauda, chair of the Associate Professor Promotion Committee at the Johns Hopkins University School of Medicine. For example, if a candidate surgically removes tissue that someone else then analyzes for genes associated with lung cancer, that candidate may end up as a middle author on a journal article for her contribution, without having thought about which genes to analyze or why they’re important. On the other hand, if the middle author analyzed gene microarray data to figure out which genes may contribute to lung cancer, her intellectual input would be viewed favorably by a promotions committee.

A candidate’s middle-author contributions to research articles are often documented in a letter of recommendation written by her department director, which, along with her curriculum vitae and letters written by faculty members of other universities, is part of a package reviewed by a promotions committee. Alternatively, middle-author contributions can be described directly in the curriculum vitae.

“I’ve encouraged folks who are participating in team science to consider annotating the bibliography portion of their CVs,” says Bill Nelson, director of the Department of Oncology at Johns Hopkins. That way, promotions committees will know exactly what the candidate’s middle-author contribution to a particular research article was — e.g., writing part of the article, securing funding for the research and/or performing experiments.

However, middle-author contributions alone don’t get a faculty member promoted.

“Promotion committees balance faculty members’ middle-author papers with other parts of their portfolio that make it clear they’re making a substantive and key contribution to the overall team,” says Gauda. She cites a recent instance in which an outside referee recommended promotion for a faculty member who was a middle author on 40 of his 47 publications. The candidate’s “technologically based research work provides the backbone onto which other projects rely … the other publications would not exist were it not for the infrastructure,” the referee wrote.

Other important parts of a portfolio include the rest of a candidate’s publication record. All middle authors up for promotion have also published first- and last-author research articles — an average of 31 for those up for promotion to full professor at the Johns Hopkins University School of Medicine, according to data from Brooks Jackson, director of the Department of Pathology.

However, there’s no set number of publications, middle-author or otherwise, that a faculty member must have in order to get promoted or hired. More important is the quality of the faculty member’s publications and their impact on that person’s field. It also helps for the candidate to have a theme to his research and, hence, publications. “If you can capture somebody in a short phrase based on the body of work they’ve published, then you know what they do,” says Nelson.

Promotion committee members can decide to vote for promotion or appointment of a candidate more easily if that candidate has a solid record of peer-reviewed publications, says Gauda. That publication record looks different for candidates with different areas of specialty. For example, a candidate who participates as a clinician in many multi-institutional clinical trials might have more middle-author publications than one who doesn’t participate in such trials. And a candidate who focuses primarily on basic science research might have more publications overall than one whose primary role is in patient care and education. When up for promotion, candidates are compared to candidates with a similar focus.

In addition to original research articles, McArthur notes that publications such as review articles, book chapters, online videos and educational websites also matter for promotion, more so if they have a great impact on the candidate’s field. McArthur emphasizes that teaching, mentorship, citizenship, and nationally recognized leadership in one’s field all matter a great deal, too.

While it’s a candidate’s whole portfolio that promotion committees consider, a candidate’s middle-author research articles are likely to grow more important to that portfolio, Nelson says, given the increasing prominence of team science.

Journal Fever: Is the pressure to publish in high-profile journals harming science?