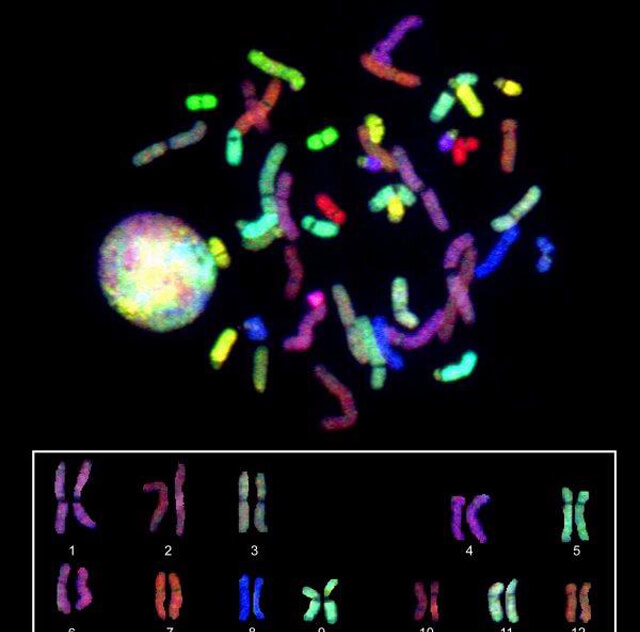 April 2013—Somewhere along the family tree, small DNA fragments from chromosomes 2 and 6 swapped places. For at least three generations, the rearrangement lay silent, with carriers living normal, healthy lives. But then, in generation four, everything changed. The already misplaced genetic material was unevenly distributed to a gamete that would become a girl, resulting in learning disabilities.

The long-hidden swap, and its consequences, were eventually uncovered by Denise Batista, an associate professor of pathology at Johns Hopkins, member of the McKusick-Nathans Institute of Genetic Medicine and director of the Cytogenetics Laboratory at the Kennedy Krieger Institute.

The kind of genetic analysis that allowed for this chromosome change and its iterations to be discovered has become significantly easier in the last decade thanks to microarray analysis, a technique that allows for observations of changes much smaller than previously possible using a microscope. Batista, who brought the diagnostic test to Hopkins/Kennedy Krieger about six years ago, spends much of her time identifying these once-invisible changes and linking them to developmental problems.

Microarray analysis involves taking a blood sample from a patient, extracting the DNA and labeling it with a fluorescent dye. The patient’s DNA is then compared with “normal” DNA, allowing for distinctions between the two to be discovered. Such comparisons show, for example, if the patient DNA has more or less genetic material than the normal DNA, called a copy number variation.

About 14 percent of patients who take the test at Kennedy Krieger are diagnosed with a copy number variation, Batista says, with another 10 percent falling into a gray zone: They have what looks like a genetic imbalance, but it’s unclear whether that anomaly is benign or not.

Though microarray analysis is used in labs across the country, Hopkins is particularly strong at diagnosis, Batista says. “The advantage of working at Hopkins is that there are so many specialized and experienced physicians who can help with the interpretation of some challenging cases.” Working with these physicians, Batista has been able to move many patients out of the diagnostic gray zone.

Though devastating, the diagnosis of a genetic anomaly can provide patients and their families with a measure of relief, Batista says. “They want to know why their child has that problem,” she says.

A firm diagnosis can also help families receive proper medical and educational care. For instance, says Batista, consider a patient with a genetic alteration that puts him at increased risk for arrhythmia. That patient should then receive regular cardiac screenings and limit his involvement in strenuous activities and sports. Likewise, linking a genetic alteration to a learning disability makes it easier to find appropriate educational services for a child.

Despite such benefits, however, some insurance companies balk at the test’s $1,500 price tag. Claims are often denied on the grounds that the test will provide a diagnosis without a treatment. To that end, Batista and colleagues have been studying all the cases receiving a positive diagnosis in the lab over the past several years to see how that information changed the patient’s overall care regimen. Preliminary results, which were presented at the American Cytogenetics Conference in San Antonio, Texas, last April , indicate that a positive diagnosis does indeed trigger changes to medical and educational care in a significant portion of cases and could even save insurance companies money in the long run.

“With this diagnosis, you know how to manage the child and the whole extended family,” Batista says. For instance, going back to the arrhythmia example, it would make sense to have family members undergo genetic testing. Those who test positive for the same alteration should also receive more frequent cardiac screenings and make similar lifestyle adjustments.

In terms of research, the availability of so much genetic material is also helping Batista and her colleagues identify lesser-known alterations and the effect that those mutations have on carriers. For instance, Elizabeth Wohler, a member of Kennedy Krieger’s Cytogenetics Lab, has begun an inventory of patients with closely related parents, such as the children of first cousins. Those patients typically have identical genetic material on both chromosomes across large swaths of DNA, placing them at increased risk for inheriting deleterious genetic mutations relative to the general population. Wohler is working to identify genes that trigger certain conditions within those regions. Creating an inventory of those mutations and the traits that accompany them should make diagnosis faster and easier in the future for families with these conditions, she says.

Kennedy Krieger stores more than just cells with chromosomal abnormalities. They also have hundreds of other cell lines frozen and available for research, Batista says, noting that this is a program Kennedy Krieger is actively trying to develop further. Researchers can utilize those cell lines for a host of projects. For instance, one Hopkins researcher is using the cells to identify therapeutic agents for metabolic disorders.

Batista has also been filling in as interim head of the cancer cytogenetics lab in Johns Hopkins’ Department of Pathology. Unlike Kennedy Krieger, which deals largely with individuals with developmental disabilities, the cytogenetics lab at Hopkins is dedicated to diagnosis and prognosis of cancer. Batista is also involved in research at the Cytogenetics Cancer Center together with Raluca Yonescu, a senior researcher. The lab’s work could one day lead to the development of diagnostic tests and genetic prognostic markers for a variety of cancer disorders.

For Batista, her vocation is a way to help patients and while tackling some of today’s toughest analytical problems. Cytogenetics “is a puzzle,” Batista says. “It’s the process of trying to find reasons and patterns in chaos."


Geneticist Ada Hamosh got a call from the neonatal intensive care unit to see a baby with a strange combination of symptoms: He had a brain bleed and almost no nose, two seemingly unrelated traits Hamosh had never seen together before. She knew that she didn't have much time before the hemorrhaging damaged the baby's brain irreparably. She did a quick search in a database known as Online Mendelian Inheritance in Man. Based on similar reported cases, she learned that what the baby needed was an immediate infusion of vitamin K.


When working to determine what each of our approximately 20,000 genes do, most researchers turn to mice and other organisms whose genes have a lot in common with ours. Figuring out what a gene does in mice gives investigators a good idea of what the human version does. Using a new technique, researchers at Johns Hopkins and elsewhere are now able to accelerate that process, promising speedier decoding of life's instruction book.