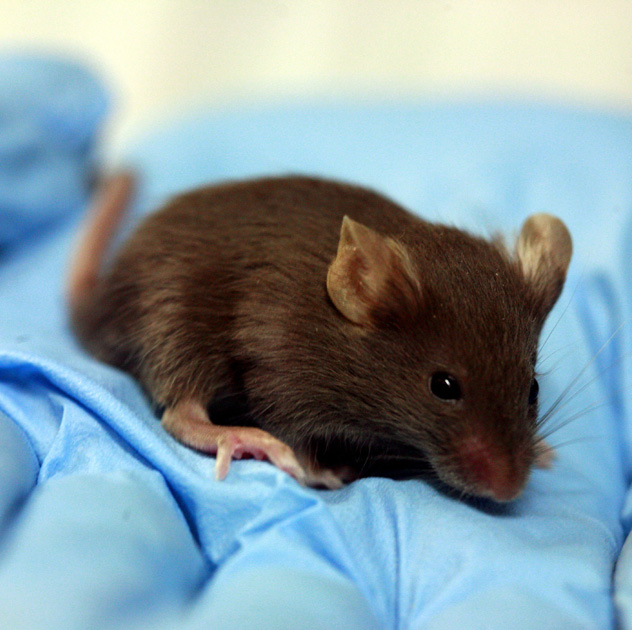 February 2014—When working to determine what each of our approximately 20,000 genes do, most researchers turn to mice and other organisms whose genes have a lot in common with ours. Figuring out what a gene does in mice gives investigators a good idea of what the human version does. Using a new technique, researchers at Johns Hopkins and elsewhere are now able to accelerate that process, promising speedier decoding of life's instruction book.

The most straightforward way of finding out what a gene does in mice is to delete it, but that is easier said than done. Traditionally, researchers inject genetically modified mouse embryonic stem cells into a developing mouse embryo to create a hybrid, then implant the embryos into a female mouse, hoping that the modified cells make it to the reproductive tissues. If these steps are successful, the resulting mice will be bred with each other for several generations to produce a few mice that are missing the target gene on both chromosomes.

Because the success rate for this process is quite low, it takes a lot of time and money. But starting early in 2013, several papers were published by groups from Harvard University and the Broad Institute describing a new method of genetic engineering that promised to change that. The new technique is called CRISPR, which refers to DNA segments known as clustered regularly interspaced short palindromic repeats. Roger Reeves, a professor of physiology and the head of the Transgenic Mouse Core Facility at Johns Hopkins, says that generating a "knockout" mouse the new way saves $50,000 to $60,000 and about a year of time.

"Many experiments on genes and proteins stay in test tubes and cells because of the time and expense required to bring them into an animal," says Reeves. "But seeing the effect of a mutated protein in the tissues and organs of a living mouse, for example, gives you a much more complete picture. This new method is so efficient and inexpensive that many more experiments will be able to be elevated to the organismal level."

The workhorse of the CRISPR system is a bacterial enzyme called Cas9, which makes nicks in both strands of DNA in a chromosome. The positioning of the enzyme, and therefore the location of the nicks, is guided by an RNA molecule that binds to specific stretches of DNA. By making a guide RNA that matches the DNA sequence to be nicked, researchers can cut the chromosome wherever they want. Once the chromosome is nicked, it tries to repair itself, but sometimes mistakes are introduced in the process. These mistakes generally result in mutations that prevent the production of a functional protein, effectively taking the target gene out of commission.

The same process can also be used to introduce specific mutations if "replacement" DNA is included. This replacement DNA can be a small ring of DNA or just a short sequence that includes the mutation of choice. This DNA is used as a template to repair the nick created by Cas9.

Joel Pomerantz, an associate professor of biological chemistry, recently used the CRISPR technique to create a change from the amino acid aspartate to alanine in a protein that plays a newly discovered role in the immune system. The CRISPR components were injected into 118 single-celled mouse embryos, which were then implanted into female mice. Twenty-three pups were born, and four of them contained the desired change. "That is a really high rate of success, and it only took four months to go from project conception to mutant mice," he says. Because it was so efficient, his group will be able to rapidly generate mutations in several other proteins to learn about their roles in immunity and cancer.

The CRISPR method can also be used to introduce genetic changes to a flask of cells. Traditionally, these genetic changes would be induced by bathing the cells in a special solution containing DNA fragments with the gene of interest. A brief but strong electric pulse causes tiny holes to open up in the cells' membranes, allowing the DNA to enter the cells. But, of the cells that survive the shock, very few will actually contain the introduced DNA, and even fewer will use its genes. While the CRISPR method still relies on this "shock trauma" to get the components into the cells, the cells that survive are much more likely to be altered appropriately because the Cas9 enzyme is so efficient.

While many researchers may want to use a system with all of the benefits of CRISPR, Reeves acknowledges that there is always a learning curve when it comes to a new technology. He hopes that the transgenic core—where the CRISPR magic happens in mice—will greatly reduce that barrier. "One of the benefits to being at an elite university with a strong investment in science is that we have core facilities that can help you every step of the way," says Reeves.

One of the services provided by the core is simply being a nexus of information. On Jan. 30, the core hosted its first "CRISPR happy hour" to bring together everyone interested in the new technology. More than 40 people attended, and the local experts that were there to answer questions were swamped.

One of the experts, postdoctoral fellow Vinod "Vinny" Ranganathan of the Wilmer Eye Institute, didn't need any convincing to switch to the new way of doing things. "I read the Science papers and started doing things the CRISPR way immediately," he says. Not only did he start using it in his project to model retinal degeneration in human cells, he got so involved in the technique that he has been creating a database to help others design their guide RNAs. He expects the database to be universally available and online by early April, but he has already used it to help colleagues at Johns Hopkins with their projects. "You put in your gene-of-interest and your organism, and it spits out good sites to target," he explains.

Part of the purpose of the database is to help people avoid targeting problematic sites. These would be stretches of DNA whose sequences are not so unique within the genome. If a guide RNA matches one of these sites, Cas9 could create cuts on multiple chromosomes, disrupting multiple genes. To avoid this, Ranganathan's database predicts which off-target sites might be hit by guide RNAs of various sequences.

Since the CRISPR technique has only been public for a year, there are very few "experts" yet, but Ranganathan could probably be considered one of them. He says that even the experts have lots of unanswered questions, which is part of why he created the database. As a shared resource for scientists around the world, it will continue to improve once more people use it and add what they know.

Reeves is excited that Johns Hopkins is working at the cutting edge of this technology. He plans to use it himself to further his studies on why an extra copy of chromosome 21 causes Down's syndrome, and he hopes that the transgenic core will soon be flooded with requests from other researchers.

"In the end, CRISPR is about getting good ideas tested more quickly in live animals so that they can be brought to the clinic as fast as possible," he says. "It's truly a breakthrough."