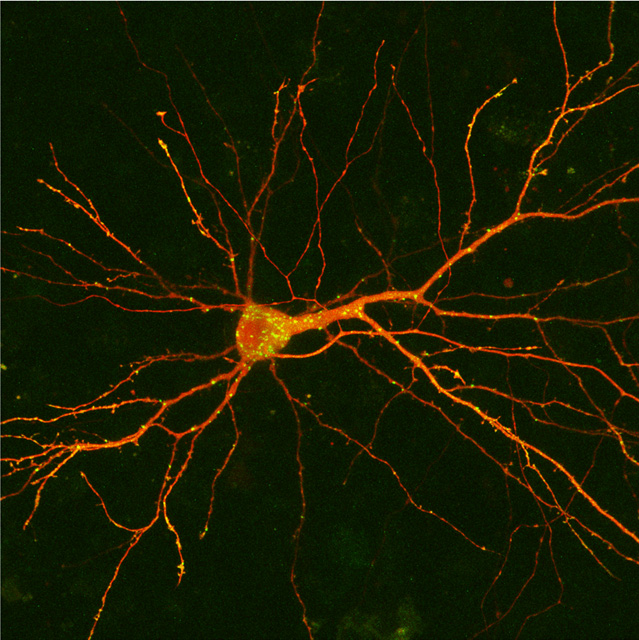 May 2014—The human brain, with 100 billion cells forming quadrillions of connections, is at constant risk of missing a connecting flight. And yet, usually, its connections are made accurately and on time.

Researchers at The Johns Hopkins University's Department of Neuroscience are working to understand how neural connections are made and how the brain uses them to guide its actions.

Neurons carry commands to other cells, usually other neurons, in the form of electrical signals. The connections between neurons, called synapses, allow the neurons to communicate. An electrical signal from an initiating neuron stimulates the release of chemical messengers that are picked up by receptor proteins in the membrane of the receiving neuron.

Synapses can be "strengthened" in a number of different ways. Studies conducted in the laboratory of Mollie Meffert, an associate professor of biological chemistry and neuroscience, have shed light on how neurons do this by increasing the production of proteins that promote synapse growth in response to the stimulus brain-derived neurotropic factor (BDNF). BDNF is a protein messenger that is released by the brain during physical and mental activity and is known to strengthen active synapses.

Using mouse neurons grown in dishes, the team was able to decipher what happens inside cells in response to BDNF. They found that BDNF regulates the production of microRNAs, which are small pieces of genetic material that can bind to messenger RNAs with partially complementary sequences. The purpose of messenger RNAs is to put DNA’s genetic code to work by “translating” it into proteins; when microRNAs bind to a messenger RNA, they prevent its translation and head off production of its particular protein. Meffert’s team found that BDNF induces neurons to produce more of a protein that binds to and selectively destroys specific microRNAs. These microRNAs target messenger RNAs coding for proteins that promote synapse growth. This method enables BDNF to foster production of the pro-growth proteins and to enhance neuronal growth.

Meffert notes that people with autism and other learning disabilities may have altered levels of the microRNA-destroying protein in their neurons. This might lead to a loss of normal synapse growth, inhibiting their ability to learn. Meffert is hopeful that microRNA analogs, which are already in clinical trials for other disorders, may one day be adapted for use in cognitive disorders.

Another researcher working to understand the controlled chaos of neural communication is David Foster, an assistant professor of neuroscience. He focuses on specialized “place cells” within the rat hippocampus, the region of the brain that is critical for the formation of new memories. Each place cell seems to be in charge of "remembering" and reacting to specific physical places as a rat encounters them. Rats have hundreds of thousands of place cells. Using miniaturized electrodes, Foster and his team can simultaneously record the signaling of up to 250 individual place cells.

To study the role of the place cells in navigation, the rats are placed in a square box with rows of evenly spaced indentations that can be filled with chocolate. As the rats forage for chocolate, they become familiar with their surroundings and learn the location of "home base," the indentation that most frequently contains their chocolate treat.

By examining the firing of the place cells and correlating each firing with the location of the rat in the box, the team discovered that, during pauses, the rats were "envisioning" the path they would take when they began exploring again. Most frequently, their imagined and actual trajectories brought them back to home base, since that is where they were most likely to find food.