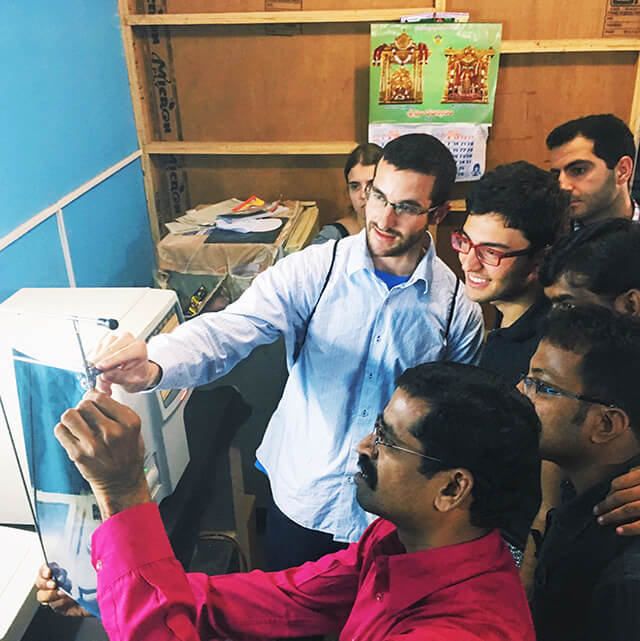 July 2017--During his first year of medical school at the Johns Hopkins University, David Gullotti attended a retreat for Christian health care providers. There he mentioned that he enjoyed using his physics and engineering background to sketch device ideas that could improve patient outcomes, but he struggled to see a path forward, a way to get his ideas into the hands of clinicians. Fortuitously, an alumnus of the Johns Hopkins’ Center for Bioengineering, Innovation and Design (CBID) master’s program was at the retreat and suggested he look into the program.

So began the journey that took Gullotti from medical school at Johns Hopkins to clinics in India to May’s engineering graduation ceremony, then back to medical school. As his journey progressed, the master’s program evolved, too, which is apt for a program that champions an iterative process to design technological health care solutions to disrupt the status quo.

Through its unique pedagogical recipe, the CBID master’s program prepares students to be efficient and effective innovators by immersing them in the clinic and providing them with on-the-job training so that they experience every element of the design process in both high- and low-resource settings — all in one year.

In the Clinic, at the Bedside

Initially, this number one biomedical engineering (BME) graduate program was just beyond Gullotti’s reach since it had never before admitted medical students. But “it seemed like the perfect sidestep for me,” he says. “I was facing clinical problems every day as a med student and, although I had ideas and drawings for how to solve them, I wasn’t sure how to bring them to reality.”

After navigating the logistics associated with being the first to do so, Gullotti took a year off of medical school and began the program last June with 21 other students. Within the first two weeks, teams were formed. Most students joined two separate teams, one for a domestic project and one for a global project, but Gullotti joined a group of six students who called themselves Baltimore Scientific and straddled their time between both a domestic project and an international one. 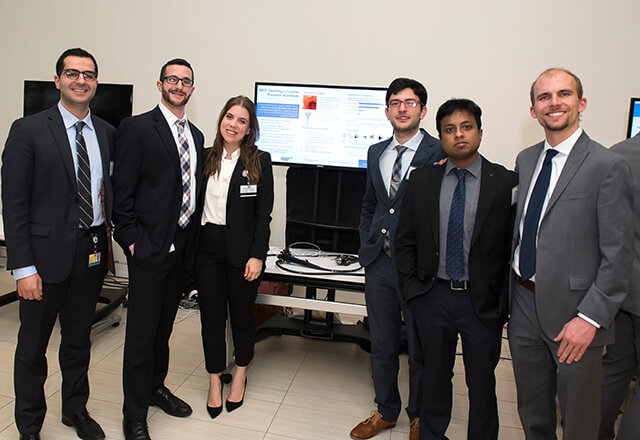 For the first two months, in addition to classes, the CBID students did clinical rotations at The Johns Hopkins Hospital — something familiar to Gullotti but foreign to most of his classmates.

That initial clinical experience formed the basis of their domestic projects, and, according to teammate Kyle Cowdrick, it’s what sets CBID apart from other top BME programs. “Often we could observe a surgery, for example, and then discuss it with the surgeon and patient afterward,” he says, “so each device idea began right where the problem originated — at the bedside.”

With the initial phase of their domestic projects complete, the students traveled in teams to countries in East Africa and Asia to begin their global health projects through prearranged clinical partnerships. The Baltimore Scientific team, sponsored by the endoscopy division of Boston Scientific Corporation, traveled to India to learn about the challenges of performing particular therapeutic endoscopic procedures in a health care setting with limited resources. 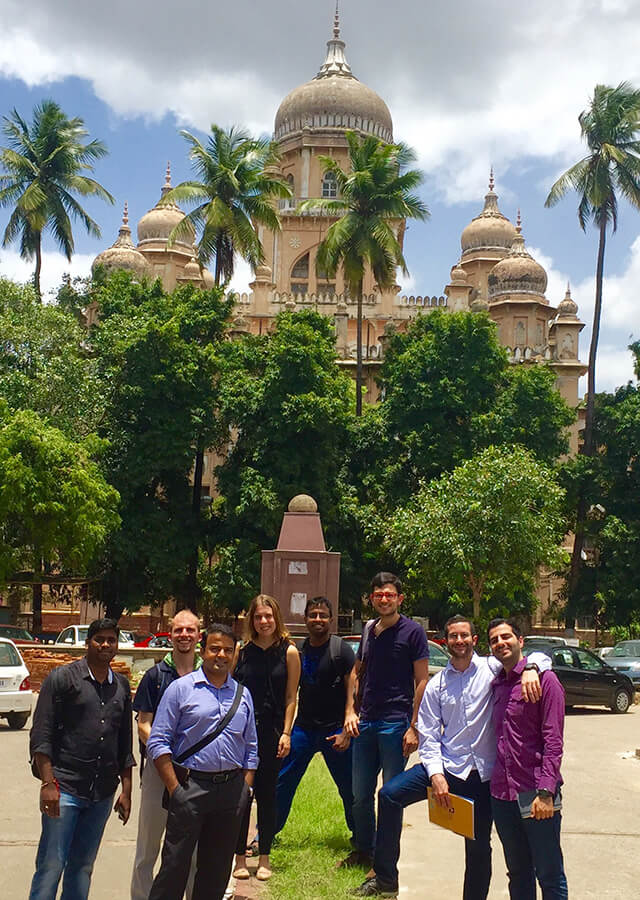 The team with Dr. Acharya and a collaborator, Suresh Pagidimarry, at the medical dome of Osmania hospital in Hyderabad, India.

Over the course of three weeks, the team observed countless endoscopies in 15 hospitals/clinics across six cities in India. They interviewed over 100 physicians, technicians and patients to better understand the challenges surrounding the procedure in India. The team then transcribed, discussed and analyzed these informational interviews to generate clinical “needs statements” and identify areas for innovation. 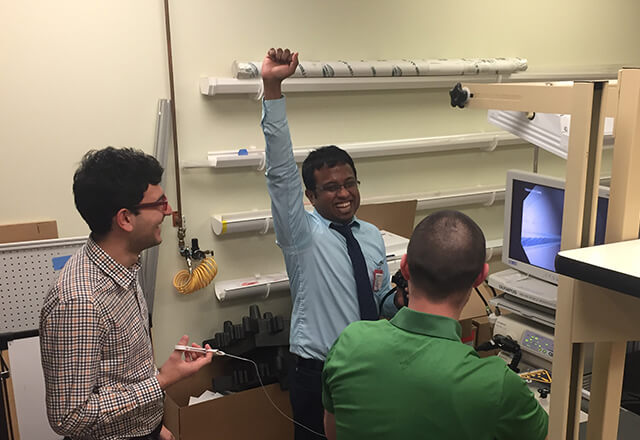 Sritam Rout and Marc Chelala celebrate as they train on endoscopy simulators.

Soumyadipta Acharya, the graduate program director of CBID, explains, “We want to train a different type of inventor — someone who doesn’t just specialize in building a doohickey well but who learns to ask the questions ‘why’ and ‘what’ first.” 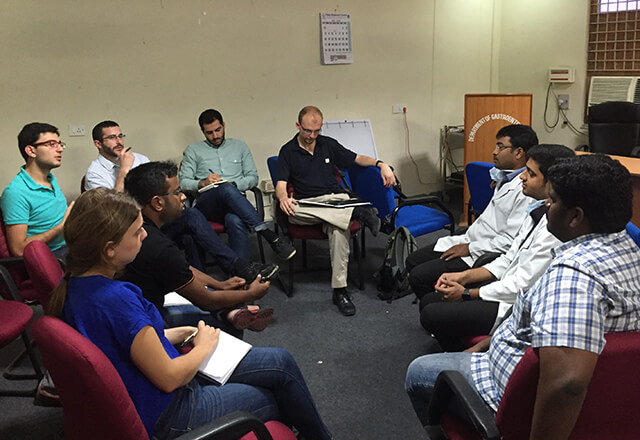 When the team returned stateside and analyzed their global experience, the problem that rose to the top was the technical difficulty of the more complex endoscopic procedures that require navigating a tube down a patient’s throat, into the stomach and small intestine until a small muscular valve is located, beyond which lies a forked path. The navigational camera can’t fit through the valve, so the path forward is blind. This difficulty limits the availability of qualified doctors in small cities while increasing the chance of complications, the distance patients have to travel, and their cost burden, which is entirely out-of-pocket in a country where the average person lives on $1.25 per day.

Enhancing a doctor’s vision also factors into Baltimore Scientific’s domestic project, which seeks to improve outcomes for spinal fusion surgeries. Surgeons plan these operations ahead of time based on X-ray and CT images taken in the clinic. However, the imaging technology within operating rooms often provides incomplete information for helping to guide surgeons’ decisions.

With these two problems in hand, the team began the next phase of their projects: the iterative generation and refining of their solution concepts.

The importance of this phase is demonstrated by a story told by the executive director of CBID, Youseph Yazdi. During his Ph.D. research, he worked on the design of a laser-based alternative to the pap smear that would be much more accurate at detecting cervical cancer than the traditional test. A startup company grew out of this concept but died a few years later. The low cost and simplicity of the pap smear meant there was no appetite in the market for a much more expensive and complicated test, even if it was more accurate. The ThinPrep, on the other hand, developed by another company around the same time, improved performance without adding much cost or complexity and became very successful. 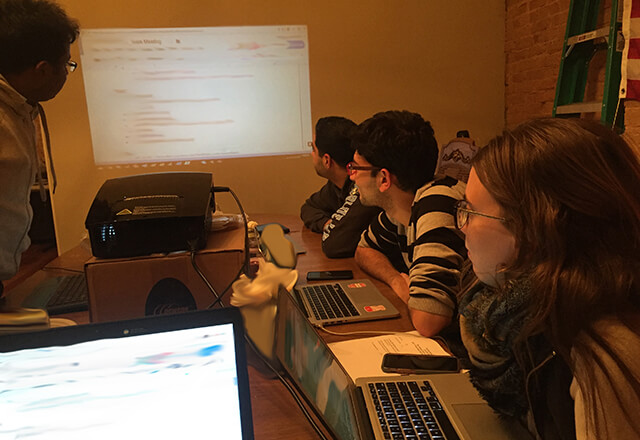 The team during one of their many meetings to discuss project logistics and next steps.

“The mentorship that CBID students receive from clinicians, BME faculty and corporate partners helps them avoid that type of error and others,” he says. “The iterative CBID design model they learn encourages them to think through the clinical, commercial, technical and strategic aspects of each project repeatedly, at each stage of development.”

To aid them in thinking through commercial factors, the students engage in market analysis, participate in business competitions and present their ideas in front of successful businesspeople and venture capitalists in a tailored version of “Shark Tank,” something akin to “American Idol” for inventors.

Marc Chelala is a Baltimore Scientific team member from Lebanon with a background in mechanical engineering. He particularly appreciated the chance to speak with specialists in intellectual property law, to learn about the complexities of health care payments and to work on regulatory matters like how to get feedback from the FDA. “Reimbursement and regulatory issues can really kill a project, but they’re things I didn’t think of much before CBID,” he says. 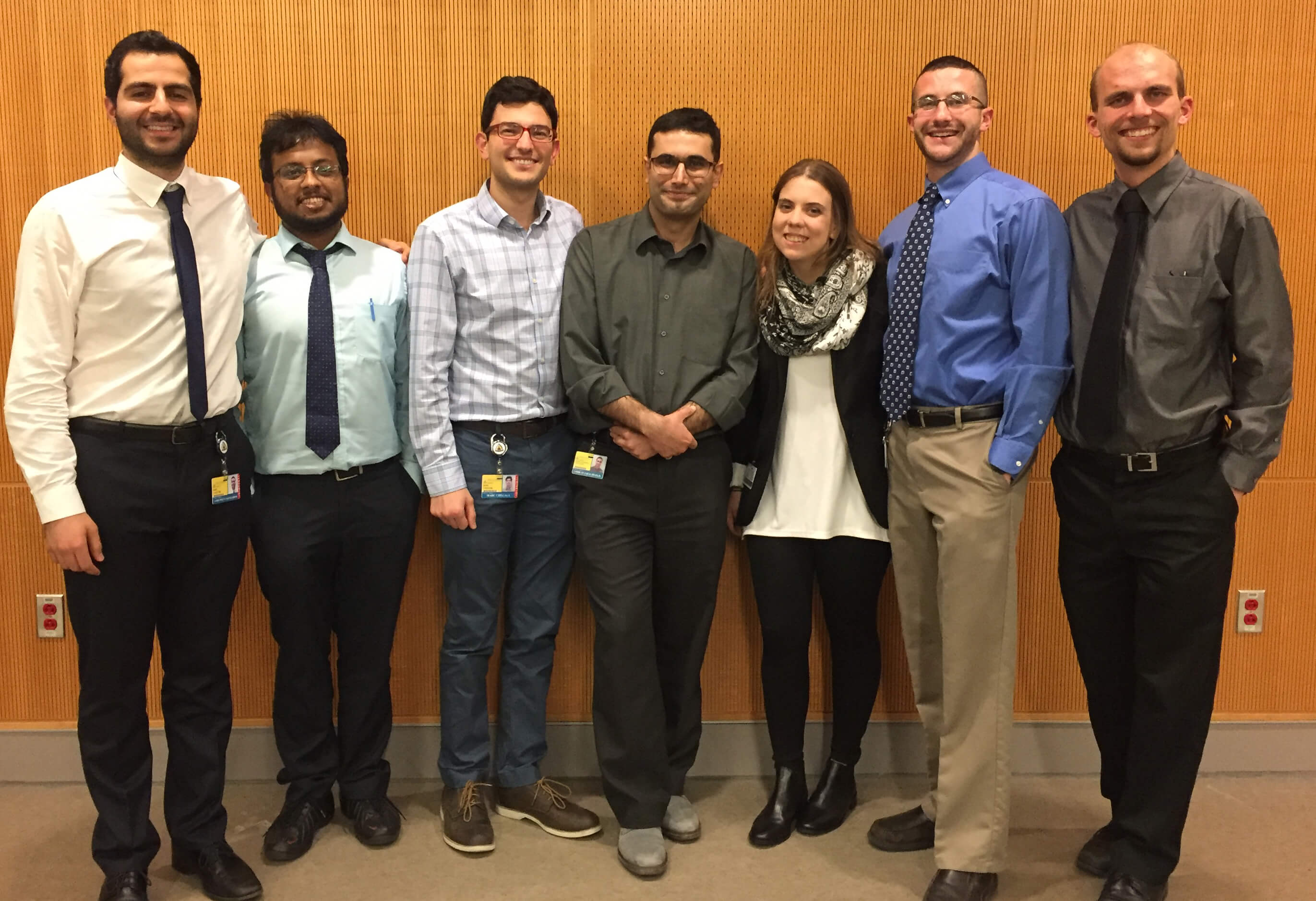 The engineering team with one of their US project advisers, Amir Manbachi Ph.D.

Of course, trying to work through the clinical, commercial, technical and strategic aspects of two projects in one year is no easy task but the intensity adds value to the experience.

Amir Soltanianzadeh, another Baltimore Scientific member, says, “If you want to do two projects well, you have to use the full power of each person on the team, while dynamically responding to each other.”

Sritam Rout, a teammate from India with a background in metallurgical engineering, says this setup allowed each person to experience the role of engineer, innovator and businessperson, giving them a broad view of the entrepreneurial landscape that startup founders face — a view that will benefit the students no matter where they go from here.

Engineering degree in hand, Gullotti is now completing his fourth year of medical school while working with Soltanianzadeh to further their innovation in spine surgery. Soltanianzadeh received a fellowship from the Abell Foundation to continue developing the project at CBID for another year.

“This is a unique opportunity for us to develop our seed idea and hopefully bring it to market,” he says. “It will be a long journey, but our end goals are simple: to change the standard of care for surgeons and, most importantly, improve the lives of patients.”

Because the global project was funded by Boston Scientific under a three-year agreement, it will get passed on to a new team of students.

Chelala says, “Through analyses and benchtop tests, we narrowed down our endoscopy solutions to two device concepts that can be developed over the next two years. Both concepts — which we are submitting patent applications for — will help doctors better orient their tools during the procedure.”

Thanks to his experience at CBID, Chelala will take the business route, starting in the fall as a consultant for McKinsey.

Maria Torres, the sixth member of the team and a native of Venezuela, will head in the direction of industry, beginning work at a small company in New York City that manufactures medical devices. As a product specialist, she will teach surgeons how to use a particular implant device.

“Working with physicians to improve patient outcomes was one of the most rewarding parts of CBID for me. I was happy to learn I could do it for a living,” she says. “Our domestic project obviously helped me get the job.”

Rout will also enter industry but as an engineer, designing surgical robotics for Globus Medical in Boston.

For Cowdrick, it’s a summer internship with Boston Scientific and then back home to Georgia, where he will pursue a Ph.D. in biomedical engineering - a joint program between the Georgia Institute of Technology and Emory University School of Medicine - so that he can strengthen his technical skills in medical device innovation.

And CBID? CBID’s path is iterative, of course. Thanks to the trail blazed by Gullotti, it is now accepting medical students with funding from the Johns Hopkins Institute for Clinical and Translational Research. It’s anyone’s guess where it will go next!