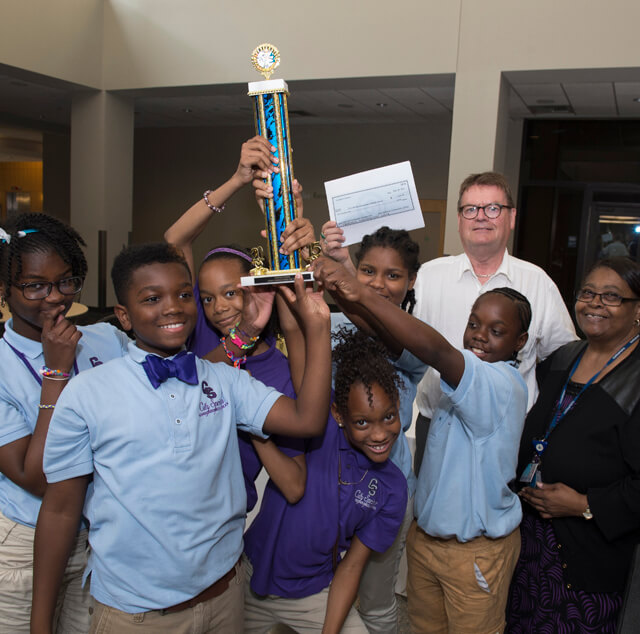 Science Fair winners and a teacher from City Springs School celebrate with their trophy. Carolyn Chance (right) joins them.

August 2015—The protests and unrest following Freddie Gray’s death while in police custody this spring have brought renewed attention to inequality in Baltimore and the lack of upward mobility in many of the city’s neighborhoods. But how best to attract high-quality jobs to the city, and to ensure that local residents are qualified for them, are questions that defy quick solutions. For years, the faculty and staff members at Johns Hopkins have been dedicated to feeding the curiosity of Baltimore’s youth and providing them with valuable experiences and mentorship.

If you don’t know what a scientist does, how can you dream of becoming one? That’s part of the premise behind the programs supported by the East Baltimore Community Affairs (EBCA) team within Johns Hopkins’ Office of Government and Community Affairs. Among other things, EBCA funds and supports programs aimed at exposing Baltimore’s youth to a variety of career options.

“Most kids want to be professional athletes when they grow up,” says Carolyn Chance, program development coordinator for EBCA. “That might work out for a few of them, but for the rest of them? If they’ve never envisioned anything else for themselves, they’ll have reached a dead end.”

In one program, EBCA brings more than 200 students to Johns Hopkins each year to listen to well-regarded speakers on the topics of Henrietta Lacks’ life and death, her historical context, and the evolution of the field of bioethics. Lacks’ cancerous cells were famously taken without her knowledge during treatment at Johns Hopkins in the 1950s and were found to grow indefinitely in the lab; they have since led to immeasurable advances in biomedicine. The lectures “give the students the opportunity to see what bioethical questions are being tackled today, in real life,” says Pamela Bechtel, assistant director of EBCA, who oversees the program.

Bechtel also supervises the Government and Community Affairs’ summer interns, whom the office has been hosting for the past six years. In addition to research and writing, the interns learn about civics firsthand through four different projects, meeting with local, state and federal lawmakers, and trying their hand at testifying before a mock committee and writing letters to their representatives. They also plan—from start to finish—a program that could benefit the people of East Baltimore.

Marquelle Miller is an alumna of the program who participated as a rising sophomore at Baltimore City College high school. She’s now gearing up for her senior year at the University of Maryland, College Park, where she’s a communications major. For the past two summers, she has worked with Government and Community Affairs interns as an aide. “This internship was my first job,” she says. “It taught me professionalism, writing skills and time management, and the mock resume and interviews we did were incredibly helpful.”

The Tantalizing Taste of Science

Chance, who coordinates the Community Science Education Program for EBCA, focuses on science education for elementary and middle school students. She organizes science activities for students that spark their curiosity and support their teachers’ efforts.

The outreach program is composed of four core activities. Basic Science Day dates back to 2001 and was soon accompanied by Oncology Science Day. Both bring in a school’s entire fifth grade class to rotate through labs for a day as the students look under microscopes and perform experiments, guided by professors, technicians and trainees. 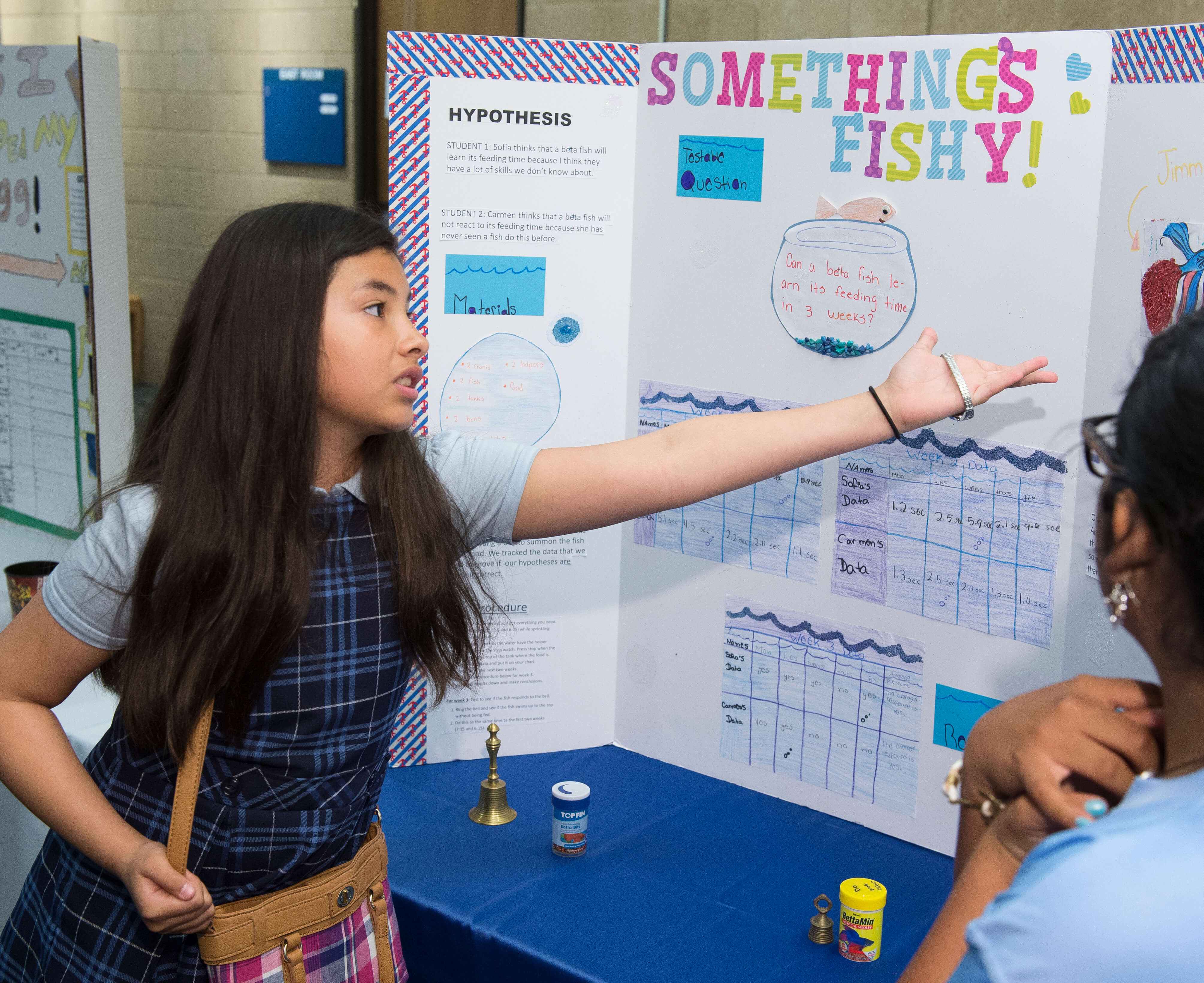 Sofia Simonton (left) and Carmen Bravo present their research at the Science Fair.

Looking for ways to enhance the program, in late 2005, the Johns Hopkins Science Fair was born. Picture a wide hallway buzzing with the excited voices of dozens of 10-year-olds explaining their science projects to anyone who stops by. Perfectly rehearsed, Carmen Bravo and Sofia Simonton presented “Something’s Fishy,” an experiment to determine whether fish, like Pavlov’s dogs, can be trained to associate the ringing of a bell with their next feeding. The results are hard to interpret, Bravo and Simonton say, but they did a thorough job explaining the situation. And they seemed to know exactly what it means to be a scientist. “Someone who solves problems,” says Simonton. “Who figures out things we don’t know yet,” adds Bravo, who wants to be a scientist herself some day, though she’s not sure what kind.

The judges came primarily from Johns Hopkins and Baltimore City Public Schools. Carolyn Machamer, professor of cell biology, was the senior judge this year; she’s been helping out with the fair for six years. “I really enjoy it,” she says. “Kids at that age are so excited about everything. It's important to encourage their natural curiosity, and science is a perfect fit.”

She adds that it’s refreshing to take a break from the minutiae of day-to-day problem-solving to meet the kids and validate what they’ve spent months preparing. She’s found herself coming back each year because the kids’ enthusiasm is contagious.

Participating this year were three to four teams from each of six different schools. The teams from the winning school, City Springs School, got to present their projects to Paul Rothman, dean and CEO of Johns Hopkins Medicine, and the executive committee in the executive boardroom. “It helps them develop another social skill,” says Chance. “They learn that VIPs are regular human beings anyone can talk to.” 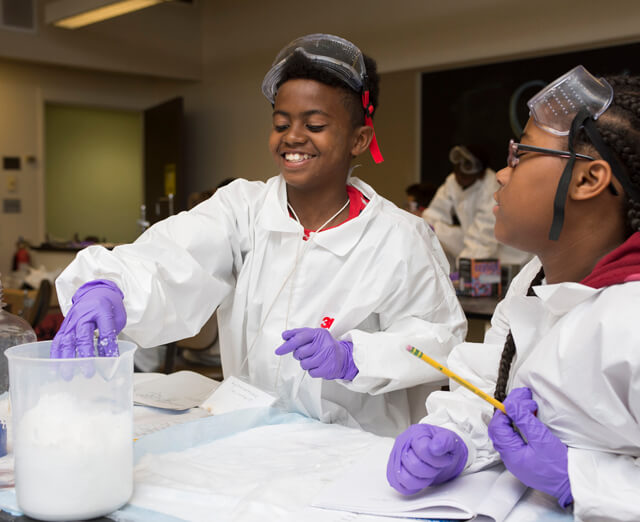 The final core activity for the Community Science Education Program is the annual Fun with Science Summer Camp. The idea was conceived in 2007, when Jie Xiao, now an associate professor of biophysics and biophysical chemistry, was looking for a way to fulfill the “broader impact” requirement of a National Science Foundation grant proposal. Working with Chance and with Margaret Strong, whom she’d met volunteering at a Basic Science Day, Xiao created a successful proposal and hosted the first camp the following summer.

“It’s a big time commitment,” says Xiao. “It could not be done without many of my colleagues volunteering their time to prepare and lead the activities. But the kids make it worthwhile. Just stop by the classroom next summer to see all the bustling around.”

The campers are mostly fifth graders from the city’s schools. They spend 10 packed days on field trips and in the school of medicine’s teaching laboratories, which are vacant for the summer. This year, among other things, the campers made compasses using a magnet and a needle stuck in a leaf floating on water. Joshua Schuler’s favorite parts were making “volcanoes” and turning pennies into silver and gold. One new activity was a game involving the spread of zombies, which mimicked an infectious disease and illustrated the protective effects of vaccination. When scheduling allows, the camp even includes a forensics lab led by Baltimore City police. 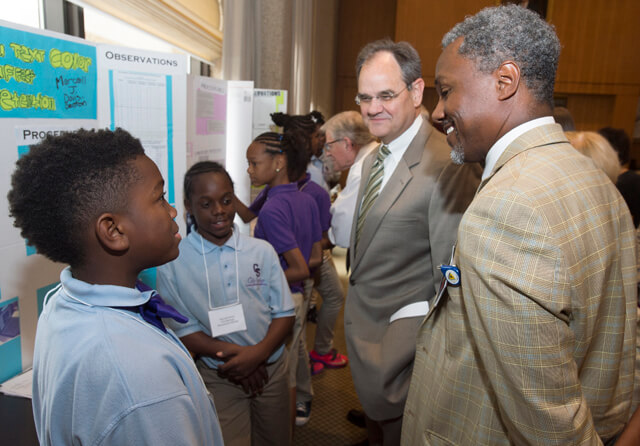 Back in the executive boardroom, City Springs’ winning teams from the science fair present their work as Johns Hopkins executives make their rounds. Principal Rhonda Richetta beams proudly at her students and sums it all up. “This is our first time winning,” she says. “The experience has been wonderful. The kids gained a thorough understanding of the scientific process and enjoyed themselves the whole time.” After hearing about one pair’s project on mnemonic devices, Roy Ziegelstein, vice dean for education, asks Marcell Davis what he’d like to be when he grows up. “I want to be a scientist,” he says, “… or a football or basketball player.”