April 2013—“Hopkins is right here, near D.C. We’re the ones who should be doing something,” explained Amanda Zimmerman, a postdoc in David Ginty’s lab at the school of medicine. By “something,” she meant political action, like taking the train down to D.C. to join the first-ever Rally for Medical Research.

“People don’t understand the long-term value of basic research,” she said. “Washington needs to separate ‘funding’ discussions from ‘investment’ discussions. Research spending pays us back, and then some.”

But, you might ask, medical research is generally seen as a good thing by everyone, so why rally for it? And why now? The impetus for this public show of support for research funding was primarily the infamous spending cuts known as “the sequester,” which went into effect on March 1.

Gathered with her at the rally in front of the Carnegie Library at Mt. Vernon Square were thousands of people, mostly research scientists attending the American Association for Cancer Research’s (AACR) annual conference at the nearby convention center. The AACR had organized the event with the support of more than 200 other organizations: nonprofits, biotech companies, patient advocacy groups, research universities and medical centers and the Sidney Kimmel Comprehensive Cancer Center at Johns Hopkins.

Zimmerman was part of a group of nine grad students and postdocs representing Hopkins at the rally. Six of them were from a single lab, that of J. Marie Hardwick, the David Bodian professor of Molecular Microbiology and Immunology at the Johns Hopkins Bloomberg School of Public Health. When a postdoc in her lab, Heather Lamb, told her about the rally, she canceled the lab meeting scheduled for that day so that as many of her trainees as possible could go. Lamb went because she shares the sentiments of the famous philanthropist Mary Woodard Lasker: “If you think research is expensive, try disease.”

The Hopkins group was organized by Beth Felder, of the Johns Hopkins Office of Government and Community Affairs. In addition to providing travel funds for the attending trainees, her office is also part of United for Medical Research, a leading advocacy organization that brought a giant inflatable microscope to the event, giving medical research a symbol that could easily be posted on Facebook and tweeted. (The rally’s hashtag #RallyMedRes was trending in the #2 position worldwide during the hour-and-a-half-long rally.)

The sequester is the shorthand term for a piece of the Budget Control Act of 2011 that says that if the Joint Select Committee on Deficit Reduction, made up of Republicans and Democrats from the House and the Senate, couldn’t come up with legislation by late November 2011 to decrease the nation’s deficit, across-the-board cuts would go into effect on Jan. 2, 2013. Those cuts would decrease our nation’s debt by $1.2 trillion over the next decade. The measure was meant as a threat to get everyone working together to avoid an unpleasant situation, but it didn’t work.

The reason the sequester matters for medical research is that the National Institutes of Health (NIH) is the largest funder of biomedical research in the world. The sequester means a loss of about 5 percent from the NIH budget this year ($1.6 billion out of $31 billion) and  an additional 3.2 percent for the nine years following. Former NIH director Elias Zerhouni has pointed out that, since the NIH will have to continue to fund existing research grants, the sequester will primarily affect new research proposals, hitting young researchers the hardest. For Zimmerman and Lamb, that’s something to rally about. 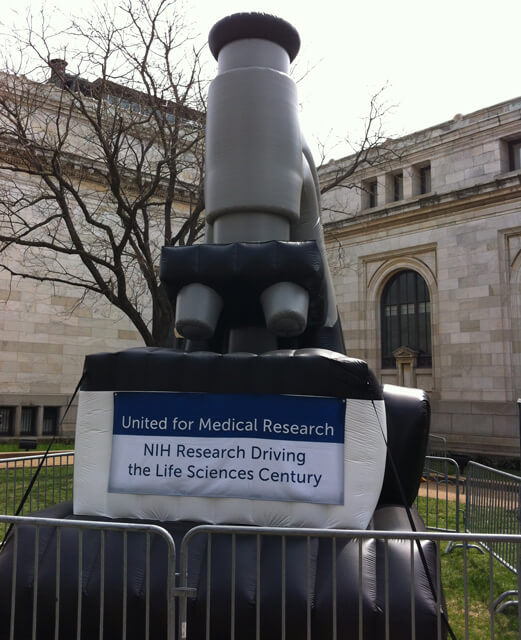 The rally was emceed by ABC political analyst and cancer survivor Cokie Roberts. In her opening remarks, she said, “We are at a point where technology is such that we are right on the cusp of so many breakthroughs, and this is exactly the moment to push forward, certainly not to pull back or stay even."

Roberts was joined on stage by several dozen advocates of medical research. There were members of Congress from both sides of the aisle, including congresswoman Rosa DeLauro, D-CT, former congressman John Edward Porter, R-IL (now the chair of Research!America), congressman Chris Van Hollen, D-MD, and a message read from senator Jerry Moran, R-KS. In addition, a statement from President Obama was read, reiterating his support for medical research.

Several patient advocates also spoke, relating their experiences, or those of their loved ones, living with HIV, acute lymphoblastic leukemia, diabetes, breast cancer, heart disease, stroke and Alzheimer’s disease. Marc Tessier-Lavigne, Ph.D., former chief scientific officer of Genentech, Inc. and current president of The Rockefeller University, spoke as a representative of both industry and academia. And Maura Tierney, an actress and breast cancer survivor, best-known for her role in the TV show ER, represented Stand Up To Cancer, Hollywood’s cancer advocacy group.

Overall, there were a few key messages that emerged from the speeches. First, it is our responsibility as a society to fund medical research to alleviate the suffering of our fellow citizens and to maintain their hope in our fight for their lives. Second, the sequester will have a long-lasting economic impact by steering young people away from jobs in research and by quashing would-be discoveries. And finally, every individual should pick up the phone and tell their congressmen that they support medical research funding.

Felder stressed this with the attendees from Hopkins, too. “You might be tempted to think that researchers don’t need to meet with your member of Congress. Not true. Congressmen on both sides of the aisle need to hear from scientists as well as patients from their districts: Tell them what you do and why you do it; share your passion.”

More about the debt:

On the Web:
The entire Rally for Medical Research can be viewed on YouTube here.