Getting to the Bottom of ALS

Getting to the Bottom of ALS

May 2014—Neurologist Jeffrey Rothstein studies a wide range of degenerative conditions that affect the nerves and muscles. As director of the Brain Science Institute and the Robert Packard Center for ALS Research, Rothstein’s main focus is unraveling the mechanisms that fuel development of amyotrophic lateral sclerosis (ALS), colloquially known as Lou Gehrig’s disease. ALS is a relatively rare but rapidly progressive and universally fatal disease marked by destruction of nerve cells in the brain that control critical functions such as swallowing, breathing, movement and speech. 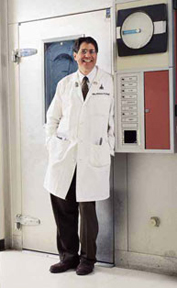 Rothstein’s team is at the forefront of understanding the molecular changes that precipitate degeneration of the nerve and muscle cells and that eventually lead to clinical disease.

Some 6,000 new cases are diagnosed each year in the United States, most of them caused by sporadic rather than inherited mutations. Indeed, only 5 to 10 percent of patients have a family history of ALS. Importantly, most genes present in familial ALS are never found in sporadic cases.

An important discovery made by Rothstein and his research team was that a substantial percentage of patients with ALS also have a common form of dementia known as frontotemporal degeneration (FTD), marked by progressive damage to certain lobes of the brain.

In 2011, Rothstein was part of a team that identified the most common genetic cause of both ALS and FTD: a mutation in a gene known as C9orf72. This mutation is very common, even in patients with sporadic ALS who have no prior family history of the disease. The mutation causes depletion of vital proteins in the nerve cells, which eventually destroys those cells. Rothstein and his team have identified several candidate proteins that may be affected by this destructive depletion. They are currently developing targeted molecular therapy to halt the destruction and thus rescue nerve cells that would otherwise die.

In order to better test potential therapies, Rothstein and colleagues recently launched a repository of induced pluripotent stem cells from patients with ALS. Researchers worldwide can access the stem cells.