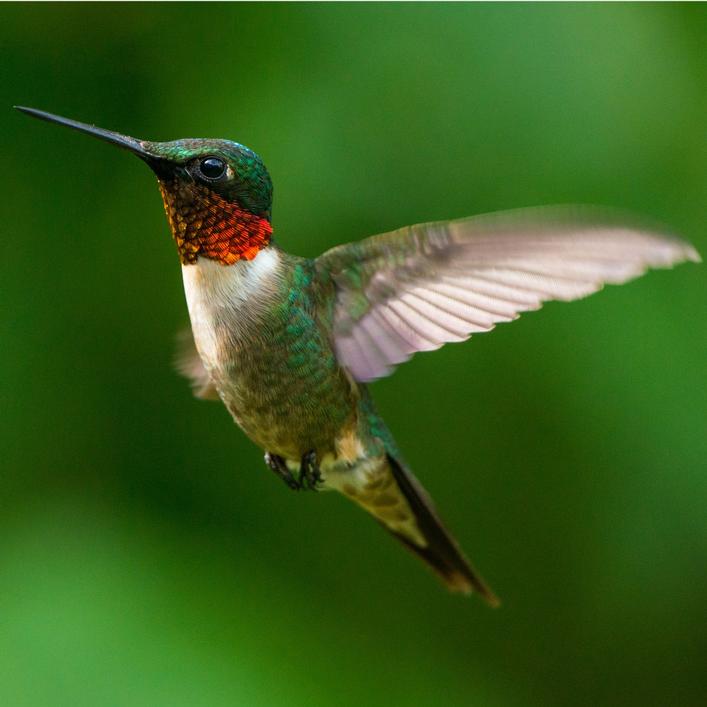 They flit from flower to flower, sucking up all the nectar and small bugs they can find. Their aerodynamic bodies seem to hover in the air, and the rapid buzz of their wings — up to 80 beats per second — creates a vague blur. It’s fall on the East Coast, and the ruby throated hummingbird is preparing to follow the warm weather across the Gulf of Mexico, flying hundreds of miles without stopping for food.

To keep up the blistering pace of their flight, they need the human equivalent of over 150,000 calories every day. To survive their migration, the birds rapidly pack on weight, as much as doubling it in a matter of days.

They slurp down so much sugar that their blood sugar levels are high enough to kill or seriously hurt a human. Much of the sugar goes straight to their muscles to fuel the constant buzz of their wings and their rapid heartbeat, which can reach up to 1,200 beats per minute. Other sugars wind up in the liver where supercharged enzymes process them into fat that fuels the birds’ migration. As soon as they take off, they rapidly burn through those fat stores, at rates that put humans’ abilities to shame.

Yet considering the bird’s massive sugar binge, and its rapid weight gain and loss, there don’t seem to be biological downsides. The hallmarks of late-stage human diabetes — kidney failure, blindness and stroke — appear completely absent.

Uncovering what makes the hummingbird’s metabolism so extraordinary could yield insights into what goes wrong in human metabolic disease and perhaps even novel ways to fight it.

“I’m a good old-fashioned American boy — I love my white bread and Twinkies, but sugar is not good for humans,” says Johns Hopkins biomedical engineering researcher Winston Timp, Ph.D. “But sugar is good for hummingbirds. And we need to figure out why it’s so good for them, so we can understand why it’s so bad for us.”

Wong stumbled onto this question when he read a series of papers from the 1980s out of the lab of University of British Columbia researcher Peter Hochachka, Ph.D.

Hochachka’s work suggested that the likely mechanism behind the hummingbird’s extraordinary metabolism is related to proteins in its liver and muscles, which process fuel sources such as sugars and fats into energy. These proteins, called enzymes, seem to be supercharged in the hummingbird and able to break down sugars and fats with an efficiency dwarfing that of most other vertebrates.

The papers sparked Wong’s curiosity. How and why are these enzymes so efficient? What is it about their chemistry and structure that makes them so effective?

Hummingbirds burn massive amount of energy each day in order to sustain their rapid wingbeat of up to 60-80 beats each second. They need to eat almost constantly, maintaining blood sugar levels high enough to cause serious disease in human. To process that high volume of sugar, hummingbirds have evolved a metabolism 77 times faster than a human’s, made possible by hyper efficient enzymes. Scientists at Johns Hopkins, as part of an international collaboration, have sequenced the genetic code of the hummingbird liver, where many of these enzymes live. The next step in their project is to use the genetic information to study how those enzymes work. The researchers hope that their work could yield insights into what goes wrong in human diabetes and obesity, by showing how hummingbird evolution solved has them.

To untangle those questions, he needed the blueprints for how these enzymes are built: the hummingbird’s genetic code. At the time, only two lone genes had ever been sequenced from the hummingbird. So, the research essentially started from scratch.

Wong built a team to tackle this sequencing issue, recruiting Timp, a longtime friend whose lab specializes in genetic sequencing technologies, and Kenneth Welch, Ph.D., a hummingbird expert from the University of Toronto Scarborough. Welch’s Ph.D. adviser had studied under Hochachka.

But without previous data, it was difficult for the scientists to convince funders to invest in the plan.

“It’s a bootstrap question,” says Timp. “You have to have already solved it before you can get at it.”

The team caught a break when it heard of a Pacific Biosystems’ competition asking for 200-word proposals to sequence the most interesting genome. The winner would receive enough laboratory supplies to get the project off the ground. Thinking there’s nothing more fascinating than the hummingbird’s metabolism, the researchers applied to sequence the hummingbird liver, where much of the bird’s metabolic action takes place.

Only they were talking about the transcriptome, not a genome.

A transcriptome is functionally similar to a genome, when it comes to analyzing the data. It does describe the genetic code. However, the genome only catalogs an organism’s genes, whereas the transcriptome reveals how often those genes are used to make proteins.

This can give scientists a snapshot of what proteins seem to be most prevalent in the animal, serving as a hint to which ones might be most important.

The researchers got a call from the company: They were tied with another team for first place.

“They basically said we were unique because we were looking at a transcriptome,” says Timp. But their team didn’t win.

However, the company decided to give them supplies anyway.

This past February they published the first paper on the project, a full transcriptome of the ruby throated hummingbird liver.

In the paper, the researchers compared the transcriptome to the genetic code of other animals, including humans, other birds, and alligators. They also compared it to the genome of another type of hummingbird completed by a group led by researchers from Duke University.

By looking for differences in the hummingbirds’ genetics compared to other animals, the researchers began to decipher the evolutionary changes that allow the hummingbirds’ metabolism to operate at such high efficiencies. Integrating Duke’s hummingbird genome into their comparison also helped them understand which genetic differences are likely important and which ones are probably inconsequential.

The results suggested that many of the hummingbirds’ genes involved in processing fats are specialized to the species. This not only supports the idea that hummingbirds’ livers have evolved to handle fats unusually well, but also points to specific genes and proteins the researchers can focus on for deeper investigation.

They also found that hummingbirds have a missing component of a protein responsible for shuttling glucose into cells, which may make the protein less effective. This could explain, in part, why hummingbirds have extremely high blood sugar compared to humans — more sugar stays available for use rather than stored in their cells.

Leveraging both the transcriptome and their international collaboration the researchers, led by Welch, received a $1.6 million grant from the Human Frontier Science Program — which is only open to teams of scientists across continents and across disciplines — to further study hummingbird metabolism.

Before applying for the grant, the researchers added another member to their collaboration: Mikel Valle, Ph.D., from CIC bioGUNE, a biomedical research center in Spain. His lab has the technology and expertise to analyze the structures of the hummingbird’s enzymes, which could uncover the physical properties that make the enzymes so efficient.

With the funds and genetic map to drive the project forward, Wong plans to create synthetic versions of the enzymes from the genetic code. Then, the researchers can determine how the hummingbird enzymes are structurally and biochemically different from other animals by studying their properties and making small tweaks to the enzymes’ genetic codes to see how it changes those properties.

The transcriptome opens up many new ways to ask and answer questions about the hummingbird metabolism, says Wong, and while humans do not have the same metabolic enzymes as hummingbirds, learning about bird biology can expand our understanding of metabolism and perhaps one day shed new light on human disease.