Flies Help Researchers Get to the Roots of Human Disease 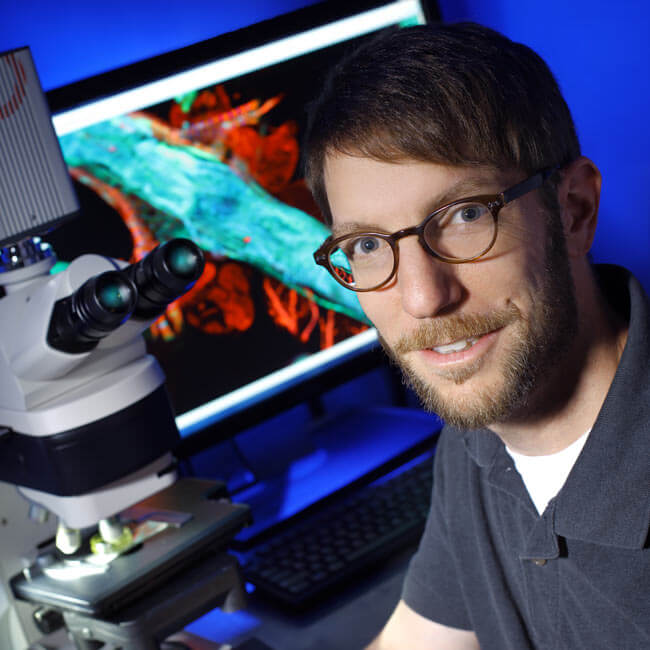 Flies Help Researchers Get to the Roots of Human Disease

October 2014—For years, Anthony Cammarato has been studying fly hearts. “I’m not interested in curing Drosophila heart disease,” he laughs. Rather, despite the vast differences between the two species, Cammarato, a biologist in the Johns Hopkins University School of Medicine, suspects flies can provide insight into heart disease in humans.  He and Duojia “D.J.” Pan, a developmental biologist also in the school of medicine, are two of a handful of Johns Hopkins researchers who find that flies have unique advantages in discerning biological principles that also apply to much larger animals. 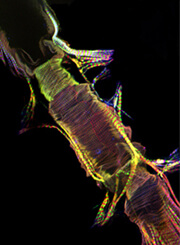 Cammarato’s research has shown that fly and human hearts start with the same building blocks, or proteins, before following different developmental paths. As a result, although the two structures look very different—the fly heart is a simple, linear tube, while the human heart is complex and chambered—they share many genetic attributes. Moreover, the fly’s heart can be severely compromised without causing death. While humans gather oxygen in their lungs, which is then transported throughout the body via the heart and blood, insects like flies have an open circulatory system. Oxygen enters through small holes on the thorax and abdomen and goes straight to every cell in the body through a system of branching tracheal tubes.

The fly’s heartiness is a unique opportunity for researchers, Cammarato says, because it enables them to generate heart mutations that would be lethal in mice or other animals and observe the effects of those mutations in a living creature.

Recently, for instance, Cammarato investigated a region of a muscle protein that is highly similar throughout the animal kingdom, one responsible for helping properly regulate contraction. The region “seems to be a hot spot for heart disease,” Cammarato says.

Now, Cammarato hopes to see how applicable that finding is to humans and to map out precisely how mutations in the hot spot region cause disease. So instead of just hunting for a mutation in flies, he’s now taking mutations found in humans and introducing those precise mutations into the fly. He’s also looking to see how the mutated protein interacts with other proteins. “We don’t yet know the mechanics of how these mutations cause disease,” he says.

Meanwhile, Pan is working to identify the genes and proteins that control organ growth. Besides answering a very basic question in developmental biology—how animals’ organs reach a fixed size—his work could shed light on runaway cell growth in various cancers.

To identify the genes and proteins responsible for organ growth, Pan exposes his flies to chemical mutagens and then looks at them under a microscope to pick out those with abnormally large organs. He next screens those mutants to see what gene went awry to yield those odd phenotypes. Because the fly genome is so small, Pan can reach what’s known as saturation mutagenesis, which means that with enough screens, he can hit every possible gene that governs organ growth. “In mice,” he says, “you can hit several genes, but you can’t realistically expect to reach saturation mutagenesis.”

Moreover, as with heart development, the pathways that control organ growth are the same for flies, mice and humans. “Starting with a simpler model can be more effective,” says Pan. “Many signaling pathways were first discovered in flies.”

As a case in point, about 10 years ago, Pan and his team identified what’s known as the Hippo signaling pathway. While other molecular pathways help govern organ growth, manipulating them makes organs only slightly bigger. Changes to Hippo can make organs up to 10 times larger.

While many cancers in humans are known to have abnormal Hippo activity, a rare disease known as neurofibromatosis type 2, an inherited disease that causes noncancerous tumors to grow in the nervous system, has been directly linked to a mutation in that pathway. Pan and his team have been looking for chemicals that restore the pathway to its original form. The team has identified a strong candidate molecule and has even shown that administering that molecule improves a mouse model of the disease. Eventually, they hope to modify and test the drug in humans.