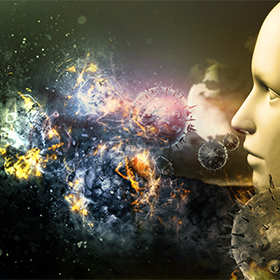 “Immunoengineering is applying engineering principles to the discovery and design of the immune system,” says biomedical engineer Jordan Green, one of several faculty members leading the charge in this area at Johns Hopkins. “This is a really new territory for us. These two different worlds historically haven’t intersected that much.”

Combining the know-how from both fields could lead to advances in a number of medical areas, says Schneck, such as enhancing tissue regeneration, regulating tolerance and biocompatibility of medical implants, controlling infectious diseases and boosting the potency of vaccines, and reducing inflammation for improvement of heart disease.

Just this past year, immunoengineering became a recognized term at the National Institutes of Health program office, says Green: “It’s really at the frontier of a lot of areas—whether it’s cell engineering, tissue engineering, cancer therapy, biomaterials, diabetes, implants or transplantation—where having control, precision, and safety and efficacy of immune system interactions is really critical.” Green has added a lecture about immunoengineering to a course on cell engineering he teaches at Johns Hopkins to advanced undergraduate and graduate students. The departments of Biomedical Engineering and Chemical and Biomolecular Engineering just recruited a new faculty member from Stanford University, Jamie Spangler, with expertise in immunoengineering and protein engineering.

How immunoengineering emerged at Johns Hopkins is “a classic Hopkins story.” It started from the ground up by students, Schneck says. Joel Sunshine, a former student Schneck taught during medical school and who was conducting research in Green’s lab while a medical student, was interested in committing himself further to research. Sunshine was admitted to the M.D./Ph.D. program at Johns Hopkins and decided to continue in Green’s lab but was interested in collaborative opportunities with Schneck. About a year and half into his Ph.D., Sunshine came back to Schneck and said he liked Schneck’s work developing artificial antigen presenting cells, or aAPC (a particle based approach that mimics natural antigen presenting cells that activate or repress the immune system). Sunshine was intrigued by the engineering that went into this work because it was complementarity to his particle engineering research in the Green lab. Sunshine had an idea about a collaborative project to redesign parts of the artificial APC. “I told Joel to talk to Karlo Perica, another M.D./Ph.D. student in my lab, and work on something,” Schneck says. “That’s the way the project started.”

In 2013, in the journal Biomaterials the two labs published a paper demonstrating that football-shaped artificial cells did a better job than the typical round cells in teaching immune cells to recognize and destroy cancer cells in mice. Fortuitously published during football season, it garnered some press attention. Green and Schneck have continued to work together, publishing several papers since. “I love telling this story,” says Schneck, “because I think it perfectly captures our culture here at Johns Hopkins.”

Green has been developing novel, biodegradable nanomaterials that could be used in cells to deliver instructions telling them how to behave. Other researchers at Johns Hopkins working on immunoengineering projects include biomedical engineer Jennifer Elisseeff, Ph.D., director of the Translational Tissue Engineering Center, who is working on the development of new materials targeting the immune response and regenerative T cell therapy to facilitate wound healing, and oncologist Jonathan Powell, M.D., Ph.D., associate director of the new Bloomberg-Kimmel Institute for Cancer Immunotherapy, who is working to metabolically engineer cells to maximize therapeutic potential in wound healing and cancer immunotherapy. Materials engineer Hai-Quan Mao, associate director of the Institute for NanoBioTechnology, has been involved in immunoengineering education and training. A Discovery Award from Johns Hopkins has helped foster their coming together as a group.

Immunoengineering could become a linchpin to advancing treatments for cancer, as mouse models that scientists have been using for decades to try to understand tumor progression are failing because of too little correlation between how mice behave when injected with tumor cells and what actually happens in human patients, says Vice Provost for Research Denis Wirtz, who directs the Johns Hopkins Cancer Nanotechnology Training Center.

Oncology researcher “Bert Vogelstein said at the American Association for Cancer Research meeting in early April that he can cure cancer in mice but that doesn’t help the patient,” Wirtz says. “He’s right.”

What engineers bring to the immunology table, says Wirtz, is the ability to potentially short circuit mouse models altogether by taking primary human cells and manipulating and controlling the properties of the cells’ environment.

“The tumor tools of oncologists are very limited,” Wirtz says. “Oncologists can use radiotherapy or chemotherapy but those have been around for decades. Only very recently, Elizabeth Jaffee, M.D. and Drew Pardoll, M.D., Ph.D. at Johns Hopkins, with a lot of skepticism, were able to demonstrate the power of modulating the tumor microenvironment as a way to help kill tumor cells. But there is still a lot of work to do. We already have signs that not all patients respond to traditional immunotherapy.  We need additional tools.” This means not only new therapies but also new diagnostics to decipher ahead of time which patients will respond so they’re not delayed from other treatments or embarking on a clinical trial medication. “We need to enrich the decision trees that clinicians have at their disposal to treat patients,” Wirtz says.

Part of what makes immunoengineering so exciting, Schneck says, is the cross-fertilization of ideas that happens from sharing work with someone from another perspective. “When you bring two disciplines together you get much more bang for your buck than when you work in silos. If we break down those silos, we can really change the field,” says Schneck.

Learn more about the strategic priority for biomedical discovery >

The Gut: Where Bacteria and Immune System Meet


Researchers at Johns Hopkins are now in the early stages of figuring out how the composition of the gut changes in different diseases, how the body’s immune system interacts with these tiny hitchhikers and particularly how that relationship may function in disease.


Jordan Green is an associate professor of biomedical engineering. He designs sophisticated molecules with specialized tasks, such as delivering therapeutics to help the body heal.