Genay Pilarowski crafted a 3-D model of DNA to explain her research to museum visitors.

March 2016—Jessica Cassin jumps at opportunities to engage with the public. As someone who didn’t know what one could do with a Ph.D. in science until she was an undergraduate, Cassin is intimately familiar with her intended audience, and she knows the importance of exposing kids to science and scientists. She first fell in love with science when, in middle school, she spent a day exploring the National Museum of Natural History in Washington, D.C., with her grandmother. That’s why she returned there as a volunteer, one of several school of medicine graduate students reaping the mutual benefits that come from engaging with the public about science.

A Capacity for Science

Kipper Fletez-Brant’s thesis work is in computational genomics — in other words, lots of numbers and abstract ideas that are hard to explain in concrete terms to young kids. But that didn’t stop him from volunteering twice as a “Genome Geek” at the museum’s human genome exhibit a few years ago. “Almost everyone I know is familiar with genetics,” he says. “I saw it as an awesome opportunity to interact with people who aren’t. I wanted to show them that science is accessible and scientists are approachable.”

That traveling exhibit, “Genome: Unlocking Life’s Code,” lived for 15 months on the first floor of the museum. On Saturdays, visitors could interact with a few genetics researchers in the “Genome Zone.” Fletez-Brant, who lives in Washington, wanted to know what visitors would be learning before they got to him, so he visited the exhibit the weekend before his scheduled date.

“I ended up walking through the exhibit behind this older, ‘blue-collar’ couple. Judging by appearances, I wasn’t expecting them to be very fluent in science,” he says sheepishly. “But with the help of a simple display, they were able to grasp the fact that the size of a species’ genome doesn’t predict complexity, for example. I realized that some of the lay public are more knowledgeable and have a greater capacity for science than I thought.”

When he returned the following Saturday, Fletez-Brant brought Lego-like building modules to help kids create a three-dimensional strand of DNA. By the end of his two hours there, the strand was 3 feet long, and he had seen quite a few “lightbulbs” go on during his brief interactions with visitors. Both parents and kids asked sophisticated questions. “The 3-D model allowed them to see for themselves that breaks and nucleotide mispairings weaken the stability of DNA,” he says, “and they wanted to understand the consequences.” 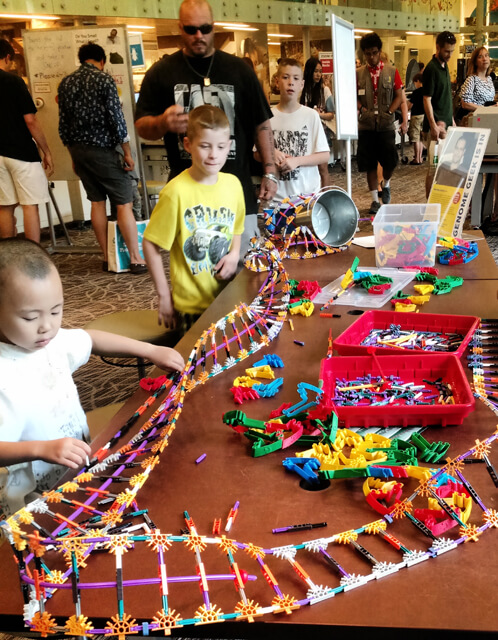 Genay Pilarowski, another genetics graduate student, first honed her communication skills by explaining her work to her parents, who aren’t fluent in science. Pilarowski studies how genes are turned on and off using chemical tags or wrapping of DNA around protein clusters called histones. “Before I could explain epigenetics and gene regulation to them, I had to explain what DNA is,” she says. “So when I volunteered at the museum, I knew what words to use, but I had to come up with a tangible activity that the kids could do themselves.”

Pilarowski crafted her own 3-D model of DNA using Styrofoam balls for histones and yarn for DNA. Then, she used red and green pipe cleaners attached to the histones to signal whether nearby genes were on or off.

“It was a fun challenge to make my work understandable and exciting to others,” says Pilarowski. “And it was rewarding to hear them ask questions that showed they understood.” What’s more, she says, the experience helped remind her of — and renew her desire to solve — the big picture questions that drove her to become a scientist in the first place.

Cassin, Fletez-Brant and Pilarowski all enjoyed being Genome Geeks so much they returned to the museum to volunteer at its new, interactive learning center, called Q?rius. The space itself is experimental and involves lots of hands-on displays that appeal to visitors 11 and up. In the center is “lab space,” where, on occasion, scientists can be found hanging out to explain their work and answer questions. “The purpose of Q?rius is to put a face on science and bring its tools and process into people’s hands,” says Elizabeth Tuck, who coordinates genomic expert volunteers. “Visitors often don’t know what scientists do and the impact their work has on our daily lives.”

Pilarowski also mentors local high school students through Thread, a nonprofit group that grew out of a Johns Hopkins student club. Cassin, too, is active in the community, volunteering as a resource for Maryland science teachers through STEMnet. “Only 18 percent of Americans know a scientist,” says Cassin. “STEMnet partners Maryland science teachers with experts in STEM fields not only to enhance their lessons, but also so students can meet someone who works in STEM.” 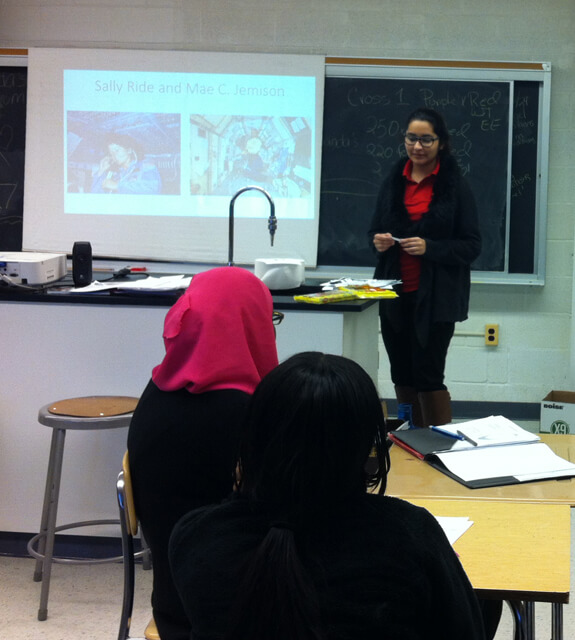 Recently, Cassin visited Western High School in central Baltimore, the oldest public all-girls high school in the country. She spoke to 20 juniors and seniors in AP biology, seamlessly weaving her own experiences with anecdotes from friends and relatives in other areas of science, technology, engineering and mathematics to give an overview of the myriad opportunities awaiting those with a curious mind and a bent for solving problems.

She describes her own current puzzle. “Nerve cells in your brain and spinal cord can’t regrow once they’ve been damaged by injury or disease,” she says, “but peripheral nerve cells that go from your spinal cord to the rest of your body can. I want to know why. What is happening in their DNA that gives them that ability?” She then hopes to apply what she learns from peripheral nerves to coax brain and spinal cord nerves to regrow.

Cassin thinks her most important role when volunteering is not to get across any particular biological concept but to serve as an example. “It’s hard to aspire to become a scientist if you’ve never met one and don’t fit the scientific stereotype in your head,” she says.

"I wanted to show them that science is accessible and scientists are approachable."
--Kipper Fletez-Brant

Only 18 percent of Americans know a scientist.


Before Stephanie Keyaka came to Johns Hopkins for a summer of research, she thought scientists were “strict, mean and all cooped-up.” Instead, she found that Johns Hopkins scientists are “down-to-earth and look just like everyone else walking down the street.” Stephanie grew up in the Johns Hopkins neighborhood but thought of our institution as far removed from her own life.


The protests and unrest following Freddie Gray’s death while in police custody this spring brought renewed attention to inequality in Baltimore and the lack of upward mobility in many of the city’s neighborhoods. But how best to attract high-quality jobs to the city and ensure that local residents are qualified for them, are questions that defy quick solutions. For years, the faculty and staff members at Johns Hopkins have been dedicated to feeding the curiosity of Baltimore’s youth and providing them with valuable experiences and mentorship.