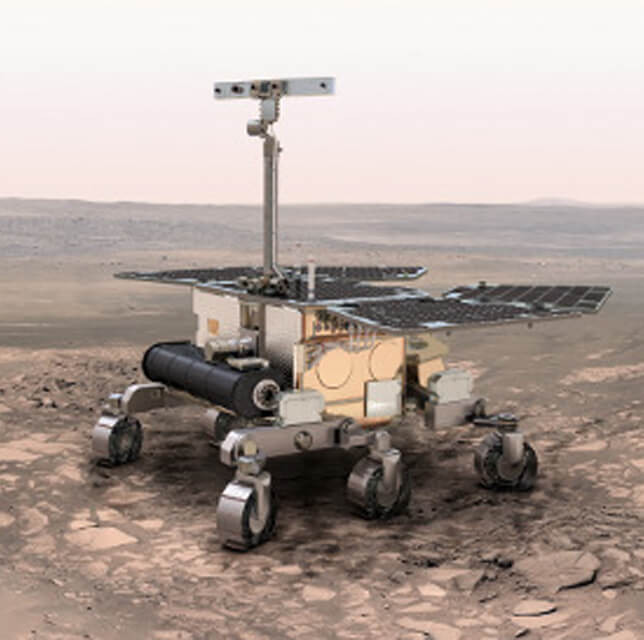 The ESA ExoMars Rover, reprinted with permission from the European Space Agency.

February 2013 -- MOMA. In this case, it’s not an acronym for New York’s Museum of Modern Art, but rather the Mars Organic Molecule Analyser.

It’s the brainchild of one of Johns Hopkins’ very own, Dr. Bob Cotter, who recently passed away from heart disease at age 69. Just a few months before he died, I had the privilege of interviewing him about one of the most challenging projects he was working on.

As he tells it, he wasn’t one of those “Star Wars kids” that grew up wanting to explore space. Instead, his fascination lay in tinkering with machines. And he was good at it, too. His forte was building mass spectrometers, complex machines that break molecules into smaller ones carrying electrical charges. The machines then use these electrical charges to move the particles through a gauntlet of analyses to provide information about the original, “parent” molecules.

Most people wouldn’t learn much from examining the resulting graphs, which look something like spikes on a heart monitor, but mass spectrometrists glean a lot from them. Mass specs, as the instruments are nicknamed, can tell us about the relative abundance of different proteins in a sample, the types of bonds and chemical groups that make up a molecule, and the identity of unknown molecules. Scientists hope that a mass spec brought to Mars can identify “molecular fossils,” chemical traces associated with life on Earth that would suggest there was once life on Mars.

MOMA, a spectrometer custom-made for Mars, is part of a mission called Exobiology on Mars, or ExoMars. It’s a project run by the European Space Agency together with the Russian space agency Roscosmos. Its purpose is to search for signs of past and present life, at least life as we know it, on Mars.

ExoMars has two phases. The first launch is planned for 2016 and will consist of the Trace Gas Orbiter, which will circle the planet while analyzing its atmosphere, and the Entry, Descent and Landing Demonstrator Module, which the Europeans will use to test their ability to land equipment on Mars.

The second launch will send MOMA to Mars and is scheduled for 2018. The instrument will be housed on a rover as part of a four-piece mini-lab for soil sample analysis. Several years ago, the European Space Agency invited NASA to contribute an instrument to the mini-lab. Cotter, along with Luann Becker and Will Brinckerhoff, who were also at Johns Hopkins at the time, submitted a mass spec proposal to NASA and it was accepted. Cotter and colleagues spent two years creating the prototype in his basement lab in the Preclinical Teaching Building at Johns Hopkins before the prototype was moved to the Goddard Space Flight Center in Greenbelt, Md., to be further developed. Until recently, NASA’s engineers had been working on the rover that landed on Mars on August 6, 2012. Now they’re full time on the MOMA project. Until his death, Cotter went to Goddard once a week to check in on the project.

The rover is decked out with high-tech cameras, infrared spectrometers and radar devices that will assess the Martian territory to find suitable places for sampling the soil, preferably places that seem to show evidence of water, past or present. Cotter explained that the rover will drill the samples, and then “they will be dished out onto a carousel that goes around to each instrument in the mini-laboratory.”

MOMA itself is a conglomeration of different instruments. There’s a gas chromatograph, made by a French team, which will identify gas molecules trapped in the soil and then send them to the mass spectrometer, made by the American team, for further analysis. The mass spec will also analyze solid samples vaporized by a high-powered laser. MOMA adds two unique capabilities to the rover’s mini-lab: detecting carbon-containing molecules at very low concentrations and determining chirality, i.e., the orientation of atoms within a molecule. Chirality, in turn, can be used to determine if a molecule is likely to have come from a living organism.

While MOMA could detect small pieces of protein, what is more likely to be discovered, and what would also be exciting, would be molecular groups that are associated with life on Earth. So far, though, water and methane are the only indications of possible life found on Mars.

Mars would indisputably be an inhospitable place to live, at least for anything that lives on Earth. A dusty, frigid desert, its temperatures can get down to -120 C. Gravity is less than half as strong as it is here, just enough to maintain a thin atmosphere full of carbon dioxide and a few other gases—no oxygen. The thin atmosphere leaves the planet’s surface unprotected from the sun’s harsh radiation, which breaks down most molecules on the planet’s surface into their chemical building blocks. For this reason, MOMA will drill down and draw samples from about three feet below the surface.

Cotter himself was equivocal about the odds that his project would ultimately find signs of life on Mars. “Theoretically, we could find living organisms in the soil, not just signs of them,” he said. “We’ve found some really hardy organisms here on Earth that can survive really harsh environments, like Antarctic fish that make antifreeze proteins to survive. So there could be well-adapted, amazing organisms on Mars, too. That said, I tend to be conservative about the prospects of finding existing life on Mars.” Considering the incredible odds, most scientists only expect to find, at most, “molecular fossils” of life forms long-extinct on the red planet.

Before analyzing any piece of that planet, the mass spec has to get there, which requires a year-long trek through the Milky Way. And to get a mass spec to function on Mars is no small feat either. Size is the first issue. The first-ever mass spec, built in 1919, filled an entire large room. MOMA, though it is the rover’s largest instrument, had to be about the size of a shoebox. But Cotter loved technical challenges like that and already had built several small mass specs for DARPA (the Defense Advanced Research Projects Agency) to go ahead of troops into battlegrounds to search for traces of biological and chemical weapons.

MOMA’s energy requirements were an even bigger challenge than its size. Solar energy is the only energy option for it, and Mars is 48.6 million miles farther from the sun than we are, decreasing the intensity of the available rays. So MOMA had to be built to consume far less energy than most mass specs. In fact, most mass specs require several thousand watts of power, while MOMA needs less than 100 watts, about the amount of a standard light bulb.

Running on low voltage was a must, too. Atmospheric pressure is related to arcing potential, the likelihood that an electric current will “jump” through the air like a mini lightning bolt. Earth’s pressure is 760 Torr, but Mars’ is only 5-7 Torr, which happens to be a sweet spot for causing arcs. An arc within the machine could require a “reboot,” damage the samples or cause permanent damage to the machine. So, instead of the usual 15 kilovolts of electricity that it takes to run similar mass specs, the MOMA’s mass spec will run at 1 kilovolt. The tradeoff is the sensitivity of the instrument and the size of molecules that can be analyzed. MOMA will have an upper cutoff of only 2,000 Daltons, about the size of a small fragment of protein, but that should be sufficient for this mission: Finding even the smallest biological molecules would be reason enough to continue the exploration with new missions.

None of Cotter’s instruments have been launched to outer space before, and he admitted he was a little nervous—it’s not like anyone can go to Mars to fix something that goes wrong. But his time at Johns Hopkins proved he could capably navigate uncharted territory, and MOMA looks set to do the same.

On the web:
More information about the ExoMars mission