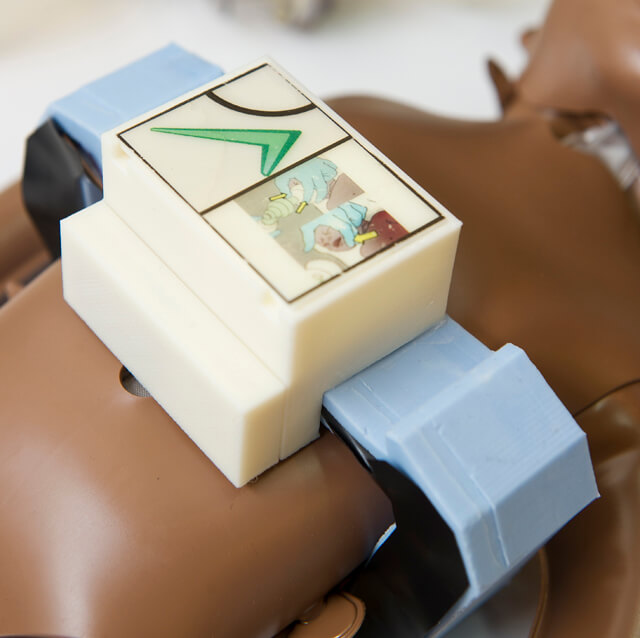 A prototype of a chest rise detector developed to help birth attendants resuscitate infants who are not breathing. Credit: Will Kirk

May 2013—Each June, a group of intrepid undergraduate and master’s degree students at Johns Hopkins take on a tough challenge: to work with others to invent a device that would solve a real health care problem in a user-friendly and cost-effective way—all in just one academic year. Those students, participants in the Center for Bioengineering Innovation & Design (CBID) program, presented the fruits of their labors at the program’s annual Design Day on May 7. CBID is a center within the Department of Biomedical Engineering with equal footing in both the School of Medicine and the Whiting School of Engineering.  “That’s the critical element we have at Hopkins Biomedical Engineering: clinicians and engineers working together without institutional barriers,” says Youseph Yazdi, the head of CBID.

The program begins each June with students shadowing clinicians in The Johns Hopkins Hospital to learn about the challenges they face and how new technology might be able to help. Later in the summer, each student spent a month in a developing country—either India, Nepal, Tanzania or Kenya—to learn about issues in resource-constrained medical care. In September, they were assigned teams, with each student participating in one “medtech team,” which focused on health care settings like Johns Hopkins,  and one “global health team,” which focused on low-resource settings, like rural Nepal. With help from their faculty advisors, each team selected a need to address. And they were off!

For their medtech project, the graduate student team of Christopher Lee, Dana Schultz, David Shin and Michelle Zwernemann was drawn to the problem of sleep apnea, a common condition that causes people to frequently stop breathing while asleep. Untreated, sleep apnea can lead to heart disease, stroke and other serious conditions. At first, the team was drawn to the treatment side of the equation, Zwernemann says, and thought about trying to devise a surgical solution. But working with advisors at Bayview’s Sleep Disorders Center, they became convinced that diagnosis was the way to go. At the Sleep Disorders Center and others like it, patients are hooked up to numerous electrodes and monitored throughout a night in the clinic. Many people aren’t willing or able to go through the inconvenience and expense, Zwernemann says, and even if they were, there are a limited number of clinics performing sleep diagnosis. 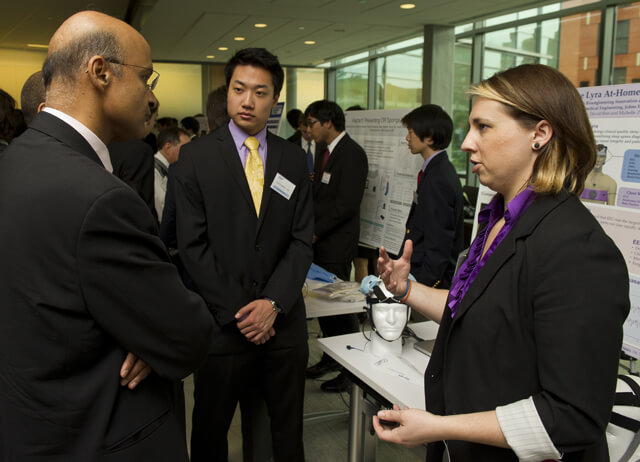 Zwernemann and her teammates began working on a way for people to gather data on their physiology while in the comfort of their own beds. “We wanted clinical quality diagnosis in a home model,” Zwernemann explains. The team found out about a new type of electrode that could be used more easily outside the clinic, but another challenge was getting all the probes fixed in the right places without a professional to apply them. The solution they came up with was to embed some of the probes in a chest strap and the rest in a helmet-like headset, which is padded both for comfort and to keep the probes in place. The team continues to refine the prototype and is talking with a company about the possibility of getting it onto the market. They envision the headset and strap being delivered to the home like Netflix DVDs, used for a night and then returned to a distribution company.

For all of the CBID teams, these types of business considerations are a strong factor in the development process, along with the engineering and medical angles. For the global health projects, the question is whether the solutions are low-cost and user-friendly enough to be practical in low-resource settings. The equation for the medtech projects is perhaps more complicated, as it includes not just absolute cost but the costs of competing products, as well as potential insurance reimbursement.

But even for the global health projects, cost is rarely the biggest challenge. When Stephen Dria, Kaitlyn Harfmann, Christopher Lee, and David Narrow took on the problem of birth asphyxia, which kills an estimated one million infants annually, they had to consider the varying conditions surrounding every birth in the developing world. “There’s no way to predict with certainty that an infant will or will not have trouble breathing, so every birth needs to have a birth attendant who knows how to do resuscitation,” Dria explains. “Lots of people were trained years ago or were trained and didn’t put their training into practice soon enough and lost those skills, or they were trained a long time ago but didn’t have refresher. Or they were never formally taught, but tried to pick it up. There are other people who don’t even realize you can resuscitate an infant.” The team also recognized that attendants don’t have time to try to recall their training, much less consult a textbook, since once a baby is born breathless, the window for resuscitation is only about 60 seconds long.

While on their trips abroad, the teammates had learned that for midwives with some training but little experience with resuscitation, the problem is often that they have no feedback on whether their attempts are working or whether they need to try something else. That’s because the rise of a newborn’s chest is so subtle that it’s nearly impossible to see, the students explained in their Design Day presentation. So they set out to develop a technology that would not only detect breathing, but remind attendants of their training. The result is a band that fits over a baby’s chest and lights up with a green checkmark when it detects the rise of the chest. When there’s no rise, a graphic lights up to remind the attendant to adjust the position of the baby’s head and check the seal between its face and the respirator. In a related project, a team of undergraduates developed a mat that makes it easier for attendants to position the head.

Dria hopes that after fine-tuning, the instrument can be incorporated into a large study of neonatal resuscitation that will soon take place in Tanzania. If the data support its effectiveness, the team plans to pass the device off to Laerdal Global Health, a program sponsor, for further development. “Birth asphyxia is a complex problem, and it doesn’t have an easy fix,” says Dria. “But I am excited to see improvement in neonatal resuscitation and to see more babies taking their first breath.”

Despite the complexity of the problems they address, the Design Day projects come across as elegantly simple. In the case of the EchoSure group, made up of graduate students Kaitlyn Harfmann, Ting-Yu Lai, Adam Lightman, David Narrow and Devin Coon, the challenge was to find a better way of monitoring blood vessels for potential problems after a surgery called free flap reconstruction. In these procedures, tissue from one part of a body is transferred to another; for example, a big toe can replace a lost thumb. About 15 percent of patients who undergo the surgery have a blood vessel that becomes blocked by a clot soon afterward, which can cut off blood flow to the transferred tissue and lead to its death. If clots are caught early, they can be treated successfully: The problem is detecting them.

Team member Coon had some personal experience with the issue. He’s a plastic surgery resident at Johns Hopkins who is completing the CBID program as the research component of his residency. He knew that while ultrasound is used for other types of monitoring, blood clots in small blood vessels are difficult to spot in this way. Inspiration struck one day while he was driving, he says. The key, he thought, was in something akin to the sun reflectors used to speed tanning. A reflector placed under a blood vessel of interest could reflect ultrasound waves and make the vessel easier to see. The team developed EchoMark, a reflector to be placed under a blood vessel during surgery to both guide nurses to the right spot for monitoring and to make clots easier to see. They also devised accompanying software, EchoFind, to help guide nurses to the correct place. The team is already testing the duo of technologies in pigs, and if further animal testing goes well, Coon says, they may eventually launch a start-up.

The projects presented at Design Day were a testimony to how much bright, motivated students can accomplish in a year—and to the fact that learning experiences can have real-world applications. “The remarkable talent level of the students, their lack of fear in diving into unknown waters, and the deep commitment of the students and sponsors to these projects is the reason they can produce so much in just one year,” says Elliot McVeigh, director of the Department of Biomedical Engineering.

The event’s keynote speaker, Medtronic CEO Omar Ishrak, encouraged the students to stay on the bioengineering path. “Just saving one life in one person’s entire lifetime is a gift,” he said. “We’re in an industry where we can save many. That’s an incredible privilege.”