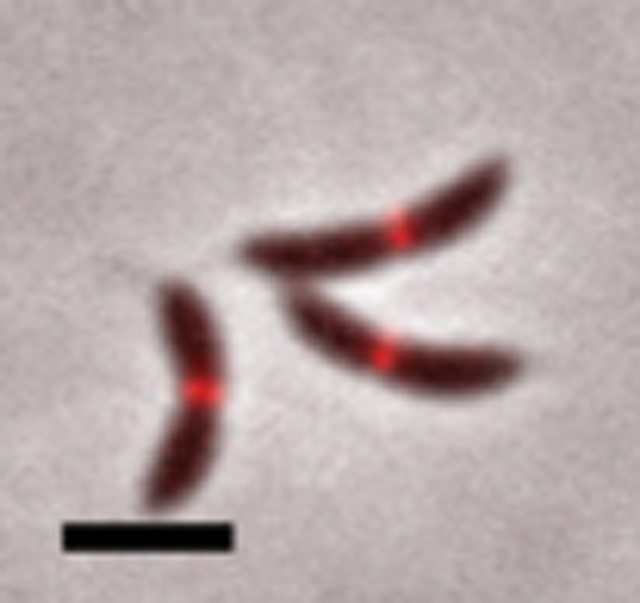 Despite their ubiquity as research tools, there is still much we don’t fully understand about bacteria — such as how they divide. Learning more could point the way to new desperately needed antibiotics.

September 2012—Antibiotics work in a variety of ways. Some destroy the bacterial protein synthesis machinery. Some abort the construction of the bacterial cell wall. Still others inhibit an enzyme bacteria need to make a vital vitamin.

But microbes have increasingly developed resistance to these points of attack, and the World Health Organization, among others, has sounded the alarm that the utility of many antibiotics could soon expire.

One possible solution is to devise new classes of antibiotics, ones that target novel parts of the bacterial architecture. That’s where Erin Goley’s research comes in. Goley, an assistant professor of biological chemistry, is not a drug researcher, but her basic science studies may one day prove useful to drug developers.

Goley focuses on the bacterial cytoskeleton, a collection of cellular proteins that assemble themselves into a scaffold that gives the bacterial cell its shape and may help to orchestrate cell division.

“No antibiotics currently in use target the bacterial cytoskeleton,” says Goley.

In fact, it was only in the late 1990s that biologists discovered bacteria even had a cytoskeleton. The cytoskeleton was first identified in the cells of eukaryotic organisms (those, such as plants and animals, whose cells have specialized organelles and a discrete nucleus). Bacteria are tiny, for one thing, and until the advent of advanced imaging technology, scientists could not get a good look inside. The species Goley studies, Caulobacter crescentus, is a mere 500 nanometers across, or about one one-hundredth the size of an average human cell.

Second, a cell wall encases most bacterial species, and scientists assumed this semi-rigid structure obviated the need for a cytoskeleton.

These assumptions turned out to be wrong. In 1998, structural biologist Jan Löwe, in the United Kingdom, demonstrated that a bacterial protein called FtsZ is an evolutionary counterpart of tubulin, a key protein component of the eukaryote cytoskeleton. The finding implied that the cytoskeleton was not a eukaryotic invention. “This was a huge discovery,” says Goley. “It excited eukaryotic cell biologists and microbiologists alike.”

Soon, scientists discovered other bacterial cytoskeleton proteins, and conducted studies that indicated these proteins endowed bacterial species with their idiosyncratic shapes (from rods to stars) and also aided in cell division.

This radical shift in thinking (as close to a revolution as can happen in cell biology) occurred as Goley was finishing her Ph.D. at the University of California at Berkeley in a tangentially related field. She decided to join the revolution.

“I was fascinated by the fundamental cell biology of these cytoskeletal proteins in bacteria,” says Goley, “and I thought there were still a lot of unanswered questions.”

To explore these questions, she is using the crescent-shaped Caulobacter, a non-pathogenic resident of freshwater lakes and streams. It is an ideal research model for a number of reasons, including the fact that whole populations of the cells can be induced to grow in synchrony, says Goley, “which allows us to dissect processes in time.” Plus, the basic cytoskeletal proteins are the same from one bacterial species to the next. So insights gleaned from research on Caulobacter will likely apply to pathogenic species.

One area that particularly intrigues Goley is the cytoskeleton’s role in cell division. In Caulobacter and other bacteria, one of the first steps in cell division occurs when FtsZ molecules link together to form a ring encircling the cell along the underside of the cell membrane. The cell then divides at the site of this “Z ring.”

Goley can label FtsZ proteins with a fluorescent protein and watch these events unfold through a fluorescence microscope. But that approach only provides a distant view of events and leaves many questions. For example: Does the Z ring serve simply as a spatial marker of cell division, something like a seamstress’s chalk line noting where to cut? Or does it exert a force that constricts and eventually guillotines the cell in two? To answer that question, Goley is planning biochemistry studies to measure the forces that FtsZ can generate.

Another question is which proteins, in addition to FtsZ, help to form the Z ring. Goley and other scientists have shown that a host of different proteins congregate around FtsZ. But it’s not clear which ones contribute to Z ring formation, and which just happen to hang out there. In a study conducted while she was a postdoc at Stanford University School of Medicine, Goley and her mentor, Professor of Developmental Biology Lucy Shapiro, identified one protein, a molecule called FzlA, that appears to play a critical role.

Electron micrograph of FtsZ filaments forming bundles in the presence of FzlA.

Goley and Shapiro demonstrated that on its own, FtsZ looks rather plain — something like an uncooked piece of spaghetti. But in the presence of FzlA, these unassuming straight lengths of spaghetti transform dramatically, sculpting themselves into “striking arcs and helical bundles,” the team reported in the September 24, 2010 issue of Molecular Cell.

One of Goley’s hypotheses is that such shape changes provide the force that enables the Z ring to divide the cell. It could be that FtsZ begins as a straight molecule anchored to the cell membrane, says Goley. When the molecules start to arc and twist, they pull the membrane inward, acting something like a cinching waistband on a dress.

“I hope this work gives us a molecular-level understanding of which parts of the Z ring are most critical,” says Goley, who joined the Hopkins faculty a year ago and stresses that many of her experiments are in the “very, very early stages.” Such knowledge could help scientists identify drugs that hobble the Z ring’s division machinery, halting bacterial multiplication and the spread of infection.

Goley notes that a research team in the United Kingdom a few years ago provided the proof of principle for this approach; the scientists used an FtsZ inhibitor to cure mice infected with the super-resistant bacterium MRSA. Clinical trials of the inhibitor have not been conducted, says Goley. “But the mouse study was a good indication that FtsZ is a viable target.”