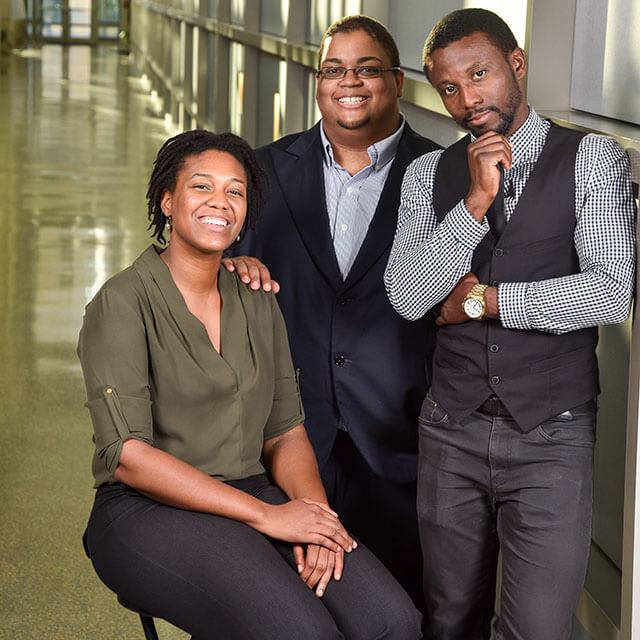 Williams, Edwards and Andrisse in the Miller Research Building.

How Three Postdocs Changed the Face of Mentorship at Johns Hopkins

It was a time of social upheaval in the nation amid the deaths of Michael Brown in Ferguson, Missouri, and Freddie Gray in Baltimore. That’s when three postdoctoral trainees began their work at the Johns Hopkins University School of Medicine. They were among seven members of underrepresented minorities in the postdoctoral program, and the mentoring program they founded has changed how Johns Hopkins students of color find support among their communities.

“Starting your postdoctoral training is different than graduate school,” says Dionna Williams, Ph.D., one of the three postdoctoral students and now an instructor of molecular and comparative pathology at Johns Hopkins. “Because postdoctoral students begin their program alone, not as a community of students with similar schedules and classes in graduate school, it’s very easy to become isolated. If you are part of an ethnicity or group that has been marginalized, you can imagine how even further isolated you may feel.”

Is This the Right Job for Me?

Diversity in biomedical research fields is a recurring challenge not only at Johns Hopkins but across the nation’s universities. Underrepresented minorities include people who identify as Hispanic, black, American Indian or Native Alaskan/Pacific Islander. Reports on graduate school and faculty diversity by the Johns Hopkins provost’s office showed that 9 percent of Ph.D. students, 15 percent of master’s students and 8 percent of faculty university wide belong to underrepresented minorities.

Boiling it down to numbers alone doesn’t get to the heart of the issue, says Williams.

Marc Edwards, Ph.D., now an assistant professor of biology at Amherst College, says that “most people don’t understand that what it takes to be successful in the biomedical research field for the average white person is different for people of color.”

“It’s possible to rarely see a person of color among faculty and scientists who visit for lectures. You’re wondering if this is the right job for you,” says Edwards. “That type of environment does little for your resolve and to equip you to do an experiment again for the 11th time.”

Edwards, Williams and fellow postdoc Stanley Andrisse, Ph.D., M.B.A., met within six months of starting their postdoc programs at Johns Hopkins. Each had previous experience in community outreach and wanted to build a community that could change the culture at Johns Hopkins — one in which they could help one another face immense pressures to get research funding, be successful and navigate the interpersonal dynamics that could make or break careers.

“We wanted to bring these issues to the forefront and make people aware of the current state and where we need to be in terms of underrepresented minority scholars,” says Andrisse, a native of Ferguson, Missouri.

At the time, it was difficult to find an extensive group of mentors with cultural competence. The few that had such knowledge were overburdened.

“When we got to Johns Hopkins, we didn’t immediately see people that look like us. Individually, we looked for resources and support for scientists like ourselves,” recalls Andrisse. “We ended up contacting the Johns Hopkins Postdoctoral Association, and they linked us together.”

The three shared similar feelings of isolation and the need to foster diverse scholars. “So, we said, ‘Let’s make this happen,’” says Andrisse.

The trio created their own mentorship program — one designed by and for underrepresented minorities. The program matches postdoctoral, graduate and medical students and residents/clinical fellows who are entering their programs with other underrepresented trainees.

Mentor-mentee pairs meet at least once per month, attend and organize social activities, and participate in and plan the annual Excellence in Diversity Symposium.

The program began with 20 participants, and now 80 trainees in clinical and research tracks are part of mentorship families.

The mentoring program, along with other initiatives, is now part of the Diversity Postdoctoral Alliance Committee (DPAC) and is a subcommittee of the Johns Hopkins Postdoctoral Association.

Susana Rodriguez, Ph.D., a fourth-year postdoctoral fellow who studies CTRP1, a secreted protein that is linked to metabolic diseases, currently co-directs DPAC. “Our mentoring families build a sense of community and help to prevent isolation among students of color,” says Rodriguez. “Some of us have challenges that other people can’t relate to, and we may not feel comfortable talking about them to our adviser. In our program, trainees discuss these issues in a safe environment and expand their network of mentors.”

“Everyone needs a space to feel comfortable at work, and then we feel empowered to do our jobs,” says Williams.

People who become isolated in their training programs can be out of the loop regarding networks of customized help and sharing of knowledge about biomedical research success. In surveys completed by mentors and mentees in DPAC, common trends emerged. Some trainees had faced outright racism and lack of respect.

Many felt immense pressure to pass their qualifying exams, fearing the shame of letting down their communities. “We counseled trainees not to place that burden on themselves. It creates unnecessary stress that distracts students from building up their weak points,” says Edwards.

Andrisse says the tide of diversity started to change as a result of the mentoring program. “People were starting to feel that their experience was more welcoming,” he says.

Mentors in the program say they receive as much as they give. They report getting a level of training that is hard to come by: They learned how to identify warning signs of stress, and they obtained guidance on connecting students with counselors, when to intervene, and how and when to do this anonymously. They also learned about pressure points around exams and journal publishing, and the impact of isolation.

“I am a much better advocate after being involved with this program,” says Edwards. “I learned how to build a network and circle the wagons around people who need help.”

“DPAC has received funding and support,” says Edwards. “It’s alive now, and that’s an awesome feeling. The university is investing more in its mentorship programs and supporting the infrastructure around it.”

For the past two years, DPAC has organized the Excellence in Diversity Symposium to celebrate the scholarship of underrepresented minority trainees. The symposium features invited speakers, poster presentations and oral presentations from trainees selected from among the submitted abstracts.

This year’s symposium will be on Dec. 4 in the Turner Concourse, and speakers include forensic chemist Candice Bridge, Ph.D., assistant professor at the University of Central Florida, and Alberto Roca, Ph.D., executive director of DiverseScholar and editor of Minority Postdoc, a web portal focused on the STEM minority postdoctoral experience.

DPAC also has begun small group meetings focused on accountability in writing, which encompasses a large part of a scientist’s job. “The idea is to develop a writing habit and talk about goals for writing,” says Rodriguez, who held a DPAC-initiated postdoctoral fellowship established by the provost’s office for women and members of underrepresented minorities.

Andrisse, Edwards and Williams spent a year getting information from other universities with fellowship programs for underrepresented minorities and developing a proposal to submit to the provost’s office. The proposal grew to double in size, and the trio became the inaugural recipients of the provost's fellowships, which are provided to eight scholars each year to fund their research and professional development.

Yet, challenges in funding the initiatives remain, says Rodriguez. In addition to the annual symposium, which DPAC has increased outreach to local universities for conference participation, Rodriguez hopes to continue a seminar series featuring talks from underrepresented minority postdocs and faculty in the biomedical research field.

Williams and her DPAC co-founders have obtained faculty positions in biomedical research. Andrisse is now an assistant professor of physiology and biophysics at Howard University, where he is studying insulin resistance and signaling. He is also an adjunct assistant professor at the Johns Hopkins University School of Medicine and director of the Prison-to-Professionals Program, which provides educational counseling and mentorship to people who have been involved with the legal system.

“It’s surreal to think we were just three people who wanted to build a support system,” says Williams. “I’m really proud that we were able to make a lasting impact and by the end of my postdoctoral work, I felt so integrated in the community that I wanted to stay here.”

Williams, who was the first in her family to go to college, now works among basic scientists at Johns Hopkins to study how HIV affects the brain in the context of substance abuse. Williams will become an assistant professor of molecular and comparative pathobiology and clinical pharmacology at Johns Hopkins University School of Medicine in July 2019. “I’ve been working my whole life to get this far, and I knew my work fit in beautifully here,” she says. “Plus I have access to other talented scientists and outstanding mentorship, not to mention the competitive package of resources they offered.”

Edwards, who grew up in Trinidad and Tobago, discovered his passion for learning when he was 12. “I was sitting in a classroom, drinking a milkshake from a straw sticking out of a hole in my desk, and my teacher said, ‘Come up to the front and bring your milkshake,’” recalls Edwards. “He taught the class what was in the milkshake — down to its smallest molecules. Then, he made me write the milkshake’s contents on 30 pages, but I was hooked — I wanted to learn more.”

Edwards says his job as a biological scientist at Amherst College is a dream come true. His new laboratory space where he’ll study how cells move is under construction.

“I had great mentors who taught me what it means to be a good scientist and how to build a team,” says Edwards. “As scientists, we also have a big responsibility to serve our communities and provide lasting support for those who come after us.”