A Researcher on a Mission, a Resource for Humanity 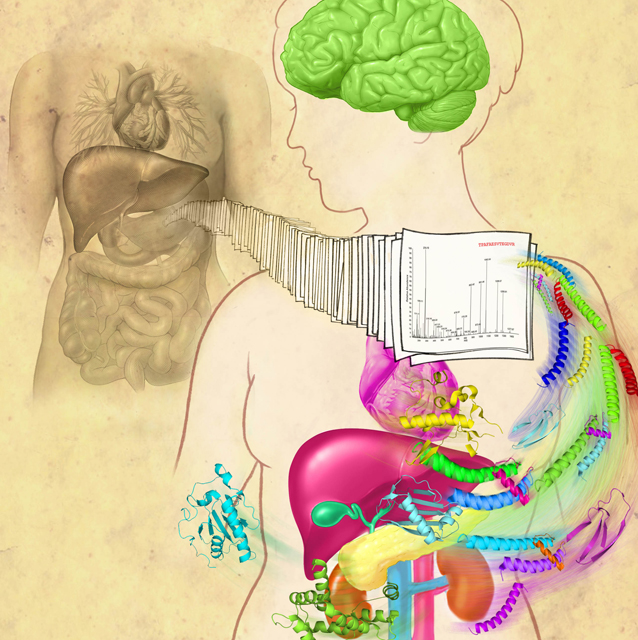 A Researcher on a Mission, a Resource for Humanity

July 2014—Christopher Columbus called the Native Americans “Indians” because he didn’t know that there was land between Europe and India, his destination. Biologists, too, can only go on quests and describe their discoveries according to what they know, whether it’s a complete picture or not. A detailed biological map of the human body would help expedite current scientific projects, suggest new places to explore and direct researchers to the most promising open questions in their fields. 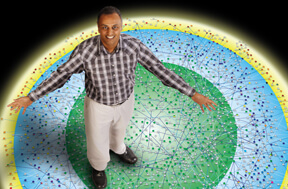 Creating that map was as daunting as any 15th century nautical adventure, but that didn't stop Akhilesh Pandey, a professor of biological chemistry, oncology and pathology at the McKusick-Nathans Institute of Genetic Medicine. He runs two labs; one at Johns Hopkins and one in India. Together, the teams created a first draft of the human proteome, a “map” of all of the proteins in the human body and an invaluable discovery tool for generations to come.

By 2000, the Human Genome Project was finishing up, and Pandey, always looking for the next big scientific frontier, began learning everything he could about the emerging field of proteomics. Trained as a clinical pathologist, he knew that “abnormal” results could only be easily spotted if “normal” was well-defined, so a human proteome project seemed like an obvious next step. But patient advocacy groups rarely fund the study of “normal,” and no large-scale, government-funded human proteome projects were being organized.

“To be fair, it was an ambitious idea," Pandey concedes. "Proteins are a lot messier than genes because of their diverse structures, functions and locations throughout the body. But the technology was ready. The project was just waiting for someone to do it.”

Since no one was willing to fund the project, in May 2002, Pandey maxed out seven of his own credit cards to begin the Institute of Bioinformatics in Bangalore, India, where his parents live. Today, the institute is funded by research grants and collaborations. The roughly 50 scientists there work in tandem with the 12 scientists in Pandey’s lab here at Johns Hopkins to  process human tissues, run protein samples through high-tech machines, and interpret and annotate the data that are generated. The data are added to the Human Protein Reference Database (HPRD), a free, online resource that launched in July 2003 and is already revolutionizing the way researchers approach their projects.

After surveying the proteins from 30 different human tissues, the group published their draft of the human proteome on May 29, 2014, in the journal Nature.

An unexpected outcome of the project was the discovery of 193 proteins that computer programs analyzing the human genome had not predicted to exist. Pandey explains that the proteins were missed for two reasons. First, the programs only looked for proteins with at least 100 amino acids, a criterion that many of the 193 proteins do not meet. Secondly, the programs ignored certain genetic sequences that contained mutations in duplicated genes, under the assumption that they were not functional genes. The existence of these newly discovered proteins shows that assumption is faulty in some cases.

Pandey says this is the beginning of a continuous conversation between genomics and proteomics. "The human genome laid the foundation for our proteome project," he says, "but now our proteome data is changing our understanding of the genome."

The Fruits of Their Labor

Karen Reddy, an assistant professor of biological chemistry and a member of the Center for Epigenetics, says her students go to the HPRD as soon as they find a new protein of interest. “They use it to get an idea of which tissues have the highest levels of that protein, which cell type they should be using to study it and whether or not their hunches about it are reasonable,” she explains.

She recently wrote a review article assessing the state of research on so-called nuclear envelope transmembrane proteins (NETs). Within minutes of entering a list of the top 50 NETs into the HPRD, Reddy had a robust “heat map” showing her which proteins were most prevalent in which tissues. “It's remarkable to have that much data instantly at our fingertips,” she says. “And even though it’s a huge amount of data, it’s high-quality data. The smaller-scale, more detailed NET studies that had already been done confirm their results.”

Pandey’s teams continue to add to the database. One current project is cataloging the proteome of body fluids like urine and blood for diagnostic purposes. But he says that most of the remaining proteins in the proteome will take a lot more time and resources to catalog, as they are the trickiest to study, either because they are rare and hard to detect or because they are found in tissues like fat that are difficult to extract proteins from.

Pandey is confident that the value of the proteome will begin to speak for itself as more scientists use it. Bert Vogelstein, a Howard Hughes Medical Institute investigator and the Clayton Professor of Oncology, agrees. "This resource is like an encyclopedia that will save researchers in every field months of hard work,” he says. “Now our fingers can do much of the work we had to do on the bench, just by typing on our keyboards.”