A Reality Check on the Biomedical Job Market 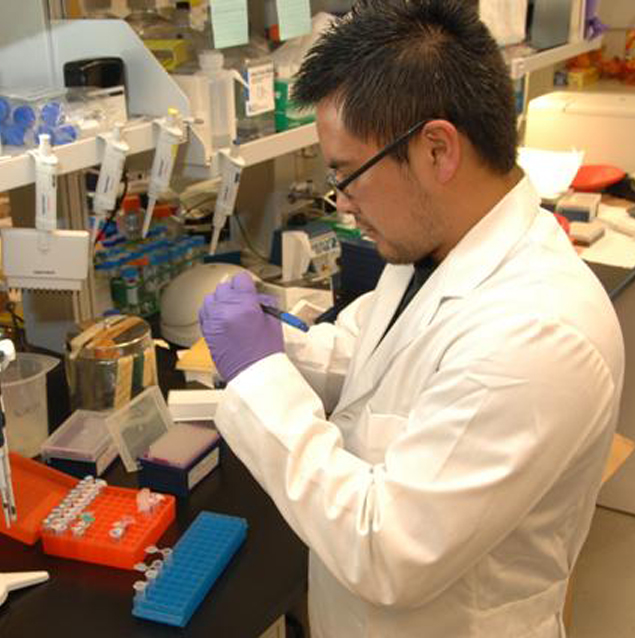 A Reality Check on the Biomedical Job Market

Research universities such as Johns Hopkins have focused on preparing scientists for academic research, with research positions in industry often being “plan B.” But there aren’t enough jobs in academia to go around.

September 2012—Felix Rivera-Mariani made a sobering discovery a few years ago while flipping through the job ads in the back of a science magazine. A postdoctoral fellow at the Johns Hopkins School of Public Health, Rivera-Mariani had entered science hoping to become a tenure-track faculty scientist. But as he thumbed through the ads, he realized that few were for academic positions. That experience changed his thinking.

“I see the limitations of academic careers,” he says, “and I’m now open-minded about other opportunities for science-related jobs in government, industry and other areas.”

Others are having the same revelation. And their experience reflects a profound shift in labor trends. The nation’s universities are pumping out more biomedical scientists than ever before. Between 2000 and 2010, the number of science and engineering graduate students rose 30 percent, and the number of postdocs increased 45 percent, according to the National Science Foundation, while the number of faculty positions did not keep pace. As a consequence, fewer biomedical Ph.D.’s are securing faculty positions. Figures from the National Institutes of Health show that proportion dropped from about 34 percent in 1993 to about 26 percent today. NSF data are even more dire, showing that only 14 percent of life scientists attain a tenured or tenure-track position three to five years after earning their degree.

What to do about the unbalanced labor equation — more jobseekers than jobs — has vexed scientists and administrators for many years and been the subject of several national reports, including a recent report by a National Institutes of Health working group. Some have suggested broadening the scope of biomedical research training to prepare scientists for a broader array of jobs. Only a few years ago, many academics resisted that idea, some even expressing disdain for careers that veered from the vaunted academic path. But hard economic realities — including a flattened NIH budget and the layoffs of hundreds of thousands of workers in the drug industry — have softened that resistance. “I think the winds are blowing so heavily against traditional academic careers from so many directions that even the most strident critics of change are starting to bend,” says Jon Lorsch, head of the M.A./Ph.D. Committee, which oversees graduate education at the School of Medicine.

The recent NIH report, which was released in June, could further propel that change. The Biomedical Research Workforce Working Group was co-chaired by Princeton University President Shirley Tilghman, a biochemist who has for many years tried to draw attention to the mismatch between training and jobs, a system she calls “dysfunctional” and not sustainable.


The group recommended several strategies for enhancing the career development of graduate students, postdocs and staff scientists. One key recommendation involves changes to funding mechanisms to ensure that a larger proportion of graduate and postdoctoral support comes from training grants and a smaller proportion from research project grants. Unlike the latter, training grants come with a stipulation that the granting agency review the quality of the mentoring the student or postdoc receives.

NIH Director Francis Collins said that the NIH should run pilot programs to test the report’s recommendations.
Even prior to the NIH report, many academic research institutions have been trying out their own career development initiatives for students and postdocs.

At Johns Hopkins, for instance, the M.A./Ph.D. Committee recently established a careers subcommittee. “The idea is to come up with ways we could enhance and broaden the career qualifications of students and figure out how to best prepare them for a range of careers,” says Peter Espenshade, subcommittee co-chair and an associate professor of cell biology.

One approach Espenshade would like to see discussed when the subcommittee meets this summer is an internship program, in which students could spend a few months working in a biotech company, pharmaceutical firm, government agency or other workplace. The University of California at San Francisco School of Medicine launched such a program three years ago with funding assistance from foundations. “An internship could help a student start to develop professional networks,” says Espenshade. “That’s what anyone needs to find a job.”

Meanwhile, some Hopkins graduate programs have launched their own career programs. The Biochemistry, Cellular, and Molecular Biology Program, for instance, recently began offering career information sessions featuring alumni from different job sectors, such as education, science writing, biotech, technology transfer and science policy. Third-year students are required to attend at least one session. “We’re not discouraging students from pursuing academia,” says Carolyn Machamer, BCMB director and professor of cell biology. About 42 percent of BCMB graduates currently hold faculty positions, she says, a percentage that has been declining in recent years.

On another front, Denise Montell, a professor of biological chemistry, is developing a plan that will enable graduate students to earn a teaching certificate while pursuing their degree. She and her husband, Craig Montell, also a professor of biological chemistry, came up with the idea over dinner while discussing the need to improve their children’s high school science education. “We thought, wouldn’t it be great to have teachers with science Ph.D.’s teach at the high school level?” says Denise Montell, who attended a high school in New Orleans where teachers held advanced degrees.
That conversation led to a collaboration with the Johns Hopkins School of Education and a first course last year — Introduction to Effective Instruction. Dave Andrews, dean of the School of Education, teaches the course to 18 School of Medicine graduate students and postdoctoral fellows. The Montells are now working with the School of Education to develop a full teaching curriculum. However, says Denise Montell, implementing those courses will require additional funds.

For postdocs, who are further along in their training, the question of employability is even more pressing. Many postdocs do not realize the career limitations of academia, says Maria Sevdali, vice president of the Johns Hopkins Postdoctoral Association (JHPDA). Surveys of postdocs nationally and worldwide show that most hope to obtain a tenure-track academic position, although only a minority do. A JHPDA survey echoes those findings. “We found that 80 percent of postdocs at Hopkins are seeking a tenure-track academic position,” says Sevdali, “but according to national numbers, only 20 percent or so will end up in that position.”

In response, the JHPDA has organized a series of workshops, networking events and career panels, which the group is calling the 80/20 Project. One take-home message Sevdali says she’s learned from the events is the importance of developing a skill other than benchwork. That lesson became blaringly clear for Sevdali during a recent presentation hosted by the JHPDA. One of the presenter’s slides showed a list of all the jobs advertized in 2011 by the biotech firm Genzyme. Of 632 jobs posted, only 12 were in research. Others were in areas such as manufacturing, marketing, quality control, regulatory affairs, and program and project management. “It only helps to know something about marketing, business, product development,” says Sevdali, “because when you go to apply for a job, you’re competing against so many others, and employers are looking for people who have these skills, in addition to a science background.”

The JHPDA has many future plans, including the establishment of an industry advisory board made up of professionals from the biotech and drug industry. But Sevdali says postdocs could use more help from mentors and administrators in career preparation. Among other items, she and other JHPDA members would like the School of Medicine to begin requiring Individual Development Plans, a formal set of professional and career goals written at the start of the postdoctorate that the postdoc and mentor review regularly. IDPs have been endorsed by the National Postdoctoral Association.

These and other suggestions for career preparation make one implicit assumption: that the nation needs the current number of biomedical scientists. A radically different approach to balancing the biomedical workforce equation would be to simply reduce the “supply” — that is, admit fewer students into science graduate programs.

Yet few appear to be advocating such a draconian approach. “[Admitting fewer students] is not as simple as it sounds,” notes Machamer. For one thing, graduate students and postdocs perform the bulk of the hands-on work in academic research labs.

There is also the growing appreciation for the versatility of a biomedical Ph.D. “People coming out of our graduate programs are trained in critical thinking, logic and science, and we need people with those skills in many different fields,” whether that field is academic research or law, business, public policy, journalism or teaching, says Machamer.

Lorsch agrees, although he admits he had not considered this range of career possibilities until one of his graduate students told him she wanted to become a high school science teacher. Nonplussed at first, Lorsch eventually came to admire the student’s decision. “A high school science teacher with a Ph.D. in science would have a huge benefit to society,” he says, “probably a greater impact than any individual researcher.”