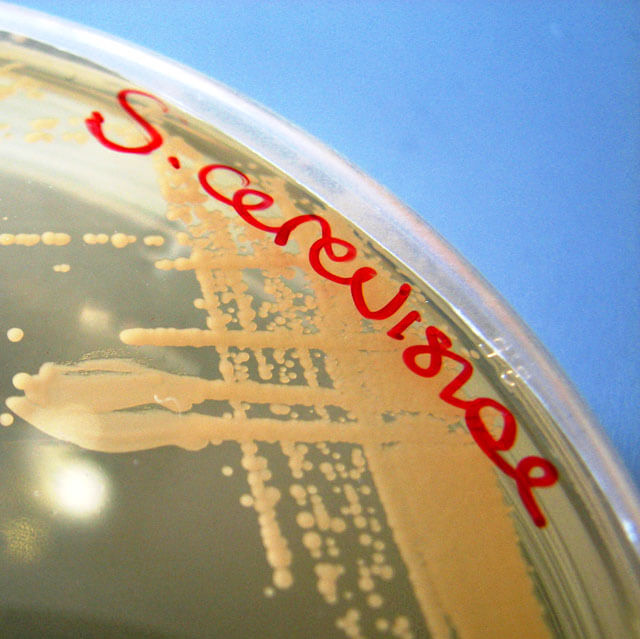 March 2017—You never know where a cup of joe might lead.

Take scientists Srinivasan Chandrasegaran of the Johns Hopkins Bloomberg School of Public Health and Jef Boeke, formerly of Johns Hopkins and now director of the Institute for Systems Genetics at New York University’s Langone Medical Center. Back in 2006, the two had an animated discussion over coffee about the possibility of synthesizing the entire yeast genome. They became so excited that they started work. Now, just over a decade later, they and collaborators around the globe have announced in a series of papers published in Science that they’ve succeeded in designing an entire synthetic yeast genome — and have already built six of its chromosomes.

The project, called Saccharomyces cerevisiae 2.0, or Sc2.0, “started as a coffee break and became a breakthrough,” says Joel Bader, interim director of the High Throughput Biology Center at the Johns Hopkins University School of Medicine, who joined early on to help with the design. Creating an artificial yeast genome could not only offer insights into fundamental biology — both humans and yeast are eukaryotes, organisms whose cells have DNA packaged inside the nucleus — but also can pave the way for applications in food security, health care, biofuels and other realms, Bader says.

“Natural yeast is a major organism for making products used in biotechnology, such as enzymes or antibiotics, but optimizing it for new products is inefficient,” Bader says. “Our designed synthetic set of chromosomes permits the yeast genome to overcome this problem by optimizing itself on the fly.”

The Sc2.0 team announced its first big step toward that bold goal three years ago in Science, unveiling the first synthetic chromosome for yeast, which has 16 chromosomes in total. That chromosome, synIII, comprised 272,871 base pairs, the chemical units that make up the DNA code. The new Science papers include an overview and five reports describing the building of synII, synV, synVI, synX and synXII, and a look at the 3-D structures of synthetic chromosomes in cell nuclei.

From a Science Coffee Break to a Science Breakthrough | Genome 1

The synthetic genome in progress has a number of exciting features, says Bader. It’s about 8 percent smaller than the natural yeast genome, with noncoding “junk” DNA removed and other genetic sequences that can make DNA unstable and prone to mutations relocated. It is equipped with a biochemical system called SCRaMbLE (synthetic chromosome recombination and modification by LoxP-mediated evolution) that allows the yeast to rapidly evolve and rearrange its genome under certain conditions, producing numerous versions of itself that researchers can compare to see which grows the fastest, for example, or makes the most of a particular protein.

In addition, the team recoded one of the “stop codons” that signal to protein-making machinery that a protein is finished. While natural yeast has three of these, the synthetic yeast has just two. “This gives us the freedom to use the unused codon to extend the genetic code” for different purposes, Bader says.

From a Science Coffee Break to a Science Breakthrough | Saccharomyces Cerevisiae 2.0

While the Sc2.0 project originated at Johns Hopkins, Bader says, “very soon, we realized that no single lab could do this project.” Boeke started a class for undergraduates on The Johns Hopkins University’s Homewood campus called Build a Genome, where students worked 24 hours a day, seven days a week putting together parts for the synthetic genome. Even that wasn’t enough, so Bader and colleagues turned to a group of international collaborators in laboratories around the world. Investigators from 10 universities in several countries, including Scotland, France, China, Australia and Singapore, contributed to the new Science series, as did BGI, a Chinese genomics company, and U.S./China-based Genescript.

The process is painstaking. After a boot camp, each Johns Hopkins University student in the genome course was given keys to the lab and assigned thousands of base pairs of the genome to synthesize. The work involves using polymerase chain reaction and other techniques to join small, chemically synthesized strands of DNA together, then verifying that the DNA sequences matched the design perfectly. The team then assembles small synthetic DNA sequences into progressively larger chunks that are installed in yeast cells in place of the corresponding pieces of native DNA. Then, the modified yeast is allowed to grow and divide so its activity can be compared to natural yeast.

The next steps are to synthesize the remaining yeast chromosomes. The researchers are also creating an original 17th chromosome to house the DNA sequences that code for the transfer RNAs that ferry amino acids into place to make proteins. These sequences can make DNA unstable, and relocating them to a single chromosome should protect the rest of the genome from damage. That effort, led by former Johns Hopkins postdoc Patrick Cai, now at the University of Edinburgh, aims to increase stability by keeping potentially trouble-making DNA sequences away from the rest of the genome and integrating them together into a single new yeast chromosome. The synthesis of all the synthetic chromosomes is on track to be completed within the next year or two. “I am very confident that we’ll be successful,” says Bader.

When that happens, he says, “We’ll be able to use that cell to answer basic scientific questions we wouldn’t have been able to answer otherwise,” such as how different genes in a cell work together to support the life of yeast. Success with synthetic yeast chromosomes suggests the possibility of creating synthetic mammalian chromosomes, which could be designed to create improved tissues, like synthetic skin for burn victims or artificial organs tailored to avoid rejection. Building mammalian chromosomes still requires a special platform for DNA assembly, Bader says: “Yeast is going to be, probably, the most important organism where that work will be done.”