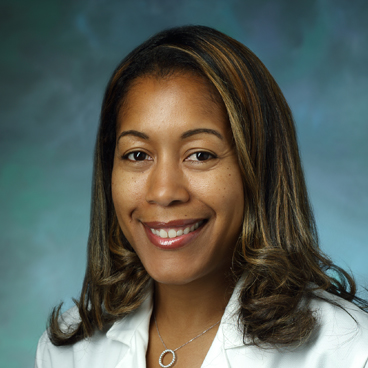 Growing up in the suburbs of Washington, D.C., Erica Richards says she was always interested in medicine. As part of a medical, science and computer science honors program at her high school, she says she was able to conduct science experiments others may not experience until college.

Richards was a biology major at Spelman College in Atlanta when she attended a conference for the Student National Medical Association that set the stage for her career in psychiatry. While there, she heard about the National Institutes of Health’s Undergraduate Scholarship Program (UGSP), which offers college scholarships and summer research training with a mentor at the NIH as well as a guaranteed job there after graduation. Richards was awarded that scholarship for her last two years of college. “That’s when I really started thinking about not only psychiatry, but research,” she recalls.

After college, Richards pursued a combined M.D./Ph.D. program at the University of Maryland School of Medicine, earning a Ph.D. in neuroscience along with her medical degree. During this training, she says, “I became more and more interested with the brain, including not only the neurology component, but I also was fascinated by how this affects mood and influences our personalities.”

After an internship and residency in psychiatry at Johns Hopkins, Richards returned to the NIH for five years, initially to pay back her scholarship time, completing a clinical research fellowship in the Mood Disorders and Anxiety program and later working as an attending physician for the National Institute of Mental Health (NIMH)’s Psychiatric Consultation Service. Her research interests included the use of ketamine for treatment-resistant depression, and the role of inflammation in the pathophysiology of depression.

While working at the NIMH, Richards started her own private practice and served as an assistant professor for Georgetown University Medical Center, where she trained psychiatrists in the combined Georgetown/NIMH psychiatric liaison fellowship. It was during this time that Johns Hopkins made the lifelong Washington resident an offer to come back that she couldn’t refuse: chair and medical director of the Department of Psychiatry and Behavioral Health at Sibley Memorial Hospital.

“I was really excited about the opportunity to come to Sibley, because it allowed me to finally return to Johns Hopkins and extend their stellar reputation for providing quality psychiatric care to patients in the D.C. area,” Richards says.

Since 2017, she has been working to expand and build up the department. The three full-time psychiatrists and one full-time psychiatric nurse practitioner at the medical center now provide care and services throughout the day, including serving an acute care inpatient unit, longitudinal outpatient psychiatric care, hospital-wide consults and emergency room coverage for psychiatric emergencies.

“It’s rewarding because we’re able to really educate people about mental health,” Richards says. “Certainly that goes for our patients and their families, but it also goes for our hospital at large—the people who work here and our surrounding community.”

Collaboration among the doctors, nurses, social workers and other specialties is an important factor in helping patients recover, adds Richards: “With our average length of stay slightly over one week, we’re able to see people get better and get them back to their lives.”

Her future vision for Sibley is to continue to grow the electroconvulsive therapy (ECT) and transcranial magnetic stimulation (TMS) programs as well as to provide specialty outpatient clinics that focus on a variety of illnesses including women’s mood and anxiety disorders, and treatment of adolescent and young adult populations. She is also working on developing enhanced collaborations with psychiatrists who work near Sibley. In addition, recognizing the importance of both medication management and therapy, Richards is working to incorporate a social work team that can provide long-term outpatient therapy.