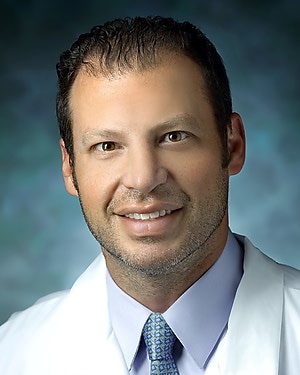 Dr. Chad Gordon is the clinical co-director of the face transplantation program within the Department of Plastic and Reconstructive Surgery at Johns Hopkins. In addition, Dr. Gordon specializes in adult craniofacial surgery, concentrating on skull reconstruction and and cosmetic surgery (from head to toe).
View All Videos >

Dr. Gordon serves as the co-director of the Multidisciplinary Adult Cranioplasty Center with Dr. Judy Huang in th Department of Neurosurgery. He is responsible for coordinating complex craniofacial reconstructions alongside a large group of dedicated neurosurgeons and multidisciplinary specialists at the Johns Hopkins Hospital.

Judy Huang, M.D., and Chad Gordon, D.O., discuss a new cranioplasty surgery that can repair the look of indents to the skull after brain surgery, a service offered by the Multidisciplinary Adult Cranioplasty Center.