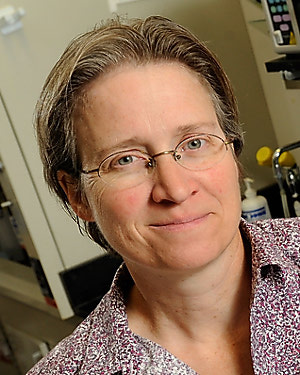 Dr. Rachel D. Green is a professor of molecular biology and genetics at the Johns Hopkins University School of Medicine.

Dr. Green’s work has been supported by the prestigious Howard Hughes Medical Institute since 2000. Her laboratory focuses on examining the molecular mechanisms of translation and their implications for gene regulation. This includes the study of the diverse aspects of translation and its regulation in bacteria, yeast and higher eukaryotic systems – with a recent focus on defining the molecular mechanisms that specify the high fidelity of protein synthesis during translation.

Dr. Green has published scores of journal articles and garnered a number of awards and honors, including being named the Johns Hopkins School of Medicine’s Teacher of the Year in 2005.

She serves on the board of directors of the RNA Society, as well as on the editorial boards of publications that include the Journal of Biology, Molecular Cell and RNA.

Dr. Green was elected to the National Academy of Medicine in 2017.

Work in the Green Lab is centered on the ribosome, and can be roughly divided into four general project areas:

The ribosome is the two-subunit macromolecular complex responsible for the translation of the genetic code into functional polypeptides.

The ribosome is composed of RNA (three large rRNAs in bacteria) and protein (more than 50 r-proteins in bacteria) in a mass ratio of about 2:1.

Investigators in the Green Lab are interested in understanding how this ribonucleoprotein machine catalyzes and coordinates the complex molecular events of translation.

These studies may reveal important details that impact on the function of other RNP machines such as the spliceosome and telomerase and may uncover clues that address the early origins of life and the potential of an “RNA world.”

As ribosomes are the target of many clinically relevant anti-microbial agents (erythromycin, chloramphenicol, and the aminoglycosides), the implications of these studies for drug development are significant.