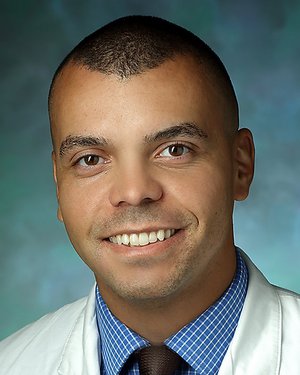 Dr. Roger W. Samuels serves as a Clinical Instructor of Medicine and COVID19 ICU Intensivist for the Johns Hopkins University Department of Medicine, as well as a Clinical Fellow in Pulmonary and Critical Care Medicine.

Dr. Samuels received his undergraduate degree from Syracuse University and later served as a volunteer in the United States Peace Corps, where he partnered with a number of development organizations in rural Guatemala from 2004-2007.

He completed his medical training at the Johns Hopkins School of Medicine in 2014, as well as an additional master’s degree in public health (MPH) from the Johns Hopkins Bloomberg School during which he recognized by the prestigious Sommer Scholars Program, was the recipient of the Louis P. Fink Capstone award for his work in the field of emerging infectious diseases, and received a TL1 Clinical and Translational Research Award from the NIH.

In addition to his current clinical role as an ICU provider, he has a breadth of training and expertise in the field of clinical research and is currently funded as a Principal Investigator under an extramural award from the Cystic Fibrosis Foundation for his work in Cystic Fibrosis Lung Transplantation.