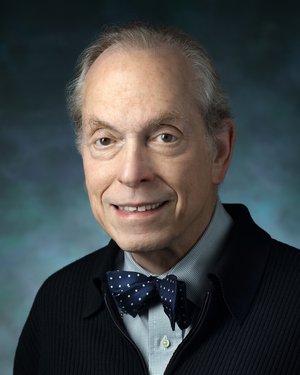 Neurotransmitters, second messengers and drug action in the nervous system

Dr. Solomon H. Snyder is a distinguished service professor of neuroscience, pharmacology and psychiatry at the Johns Hopkins University School of Medicine. He is the founder of the Solomon H. Snyder Department of Neuroscience and served as its director from 1980 to 2006. He is world-renowned for his pioneering research in the identification of receptors for neurotransmitters and drugs and the elucidation of the actions of psychotropic agents.

Dr. Snyder completed his undergraduate work at Georgetown College and received his M.D. from the Georgetown Medical School. After further studies at the National Institutes of Health, he completed a residency in psychiatry at Johns Hopkins. He joined the Johns Hopkins faculty in 1966.

The Snyder lab is interested in atypical neurotransmitters such as the gasotransmitters nitric oxide (NO), carbon monoxide (CO), and hydrogen sulfide (H2S). Particular attention has been focused upon downstream targets of NO and H2S and the role of sulfhydration of the protein parkin in the pathophysiology of Parkinson’s disease. Additionally, the lab showed that Deprenyl, a drug used to treat Parkinson’s disease, acts by blocking the nitrosylation of GAPDH and its binding to Siah. Deprenyl-like drugs may be therapeutic in neurologic diseases and cocaine addiction.

The lab discovered that the striatal selectivity in Huntington’s Disease reflects the binding of the striatal-selective G protein Rhes to mutant huntingtin whose cytotoxicity arises from its inhibiting the promoter of the biosynthetic enzyme for H2S.

The lab has established that D-serine is a novel neurotransmitter, which acts by stimulating the “glycine” site of glutamate-NMDA receptors. The lab isolated and cloned serine racemase, which generates D- from L-serine. The pathophysiology of DISC1, whose mutation underlies psychotic disorders, reflects its binding to serine racemase to impair D-serine formation.

The lab has also identified, isolated and elucidated receptors for the second messenger IP3, which releases intracellular calcium. They have cloned a family of three IP6 kinases and a related enzyme, inositol polyphosphate multikinase (IPMK). Besides phosphorylating inositol phosphates, IPMK is a physiologic PI3 kinase that can facilitate protein translation and play a major role in transcriptional signaling. The importance of these events is evident in the abolition of immediate early gene induction in IPMK deleted mice.

Neurotransmitters, second messengers and drug action in the nervous system

Information processing in the brain reflects communication among neurons via neurotransmitters. The major chemical classes of neurotransmitters are biogenic amines, amino acids and peptides. During the past few years we have identified and characterized novel transmitters or neuromodulators which overturn much dogma in the field. For instance, we discovered that nitric oxide (NO) satisfies the major criteria of a neurotransmitter, as NO synthase is localized to specific neuronal populations and inhibitors of the enzyme block neurotransmission in certain systems. Yet NO is a gas which cannot be stored in synaptic vesicles, released by exocytosis, or act at receptor proteins on cell membranes. In vascular stroke excess release of the excitatory amino acid neurotransmitter glutamate activates NO synthase to form NO that mediates neurotoxicity. Evidence for this includes the blockade of stroke damage by inhibitors of NO synthase and a lesser amount of stroke damage in the brains of mice lacking the neuronal form of NO synthase. In mice in which the gene for the neuronal NO synthase has been "knocked out" we observe dramatic alterations in social and sexual behavior indicating a prominent role for NO in aggression and sexual attraction.

At least one other gas, carbon monoxide (CO) may be a neurotransmitter. CO is formed by the action of the enzyme heme oxygenase, which cleaves the heme ring liberating CO and forming biliverdin, which is converted to bilirubin. We found that a neuronal form of heme oxygenase occurs in discrete neuronal populations in the brain, and CO formed from it may be involved in regulating levels of cyclic GMP. Just as NO, formed in the endothelial layer of blood vessels, diffuses to the smooth muscle and is a major normal relaxing element of blood vessels, CO is formed by heme oxygenase in the endothelium and also relaxes blood vessels. Besides forming CO, heme oxygenase action gives rise to ferrous iron and biliverdin which is rapidly reduced to bilirubin. We have shown that bilirubin is a key neuronal antioxidant neuroprotectant. Low nanomolar concentrations of bilirubin reverse the oxidant effects of 10,000 times higher concentrations of oxidants, an amplification mediated by a unique bilverdin reductase cycle. When bilirubin acts as an antioxidant, it is oxidized to biliverdin. Biliverdin reductase rapidly reforms bilirubin. Deletion of biliverdin reductase from cells leads to excess oxidation and cell death.

D-serine may be a neurotransmitter, as improbable as the gases, being the "wrong" isomer and occurring in glia, not neurons. Levels of D-serine in the brain are a third those of L-serine, and it is the only D-amino acid to occur in substantial levels in the brain. Our immunohistochemical maps reveal D-serine in a unique population of glia, which ensheathe nerve terminals selectively in regions of the brain enriched in the subtype of glutamate receptor referred to as the N-methyl-D-aspartate (NMDA) receptor. NMDA receptors had been thought to be co-activated by the amino acids glycine and glutamate. D-Serine appears to be the normal stimulus for the glycine site of this receptor. D-Serine is released from these astrocytes by glutamate acting at the AMPA subtype of receptor. Selective destruction of D-serine by D-amino acid oxidase markedly reduces NMDA neurotransmission. A novel enzyme, serine racemase, transforms L- to D-serine. It binds to GRIP, a scaffolding protein that links serine racemase to AMPA receptors so that glutamate transmission markedly activate the enzyme with associated release of D-serine (Figure 1: Diagram of nitric oxide (NO) and carbon monoxide (CO) disposition at synapses).

These two substances have been characterized in our laboratory as atypical neurotransmitters. As gases, they cannot be stored in synaptic vesicles, released by exocytosis or bind to receptor proteins on the external surface of neurons. They are formed "on demand" by activation of their biosynthetic enzymes. Neuronal depolarization leads to calcium influx that binds to calmodulin, stimulating NO synthase as well as heme oxygenase-9. Both NO and CO diffuse into adjacent cells to activate guanylyl cyclase to form cyclic GMP. Additionally, NO S-nitrosylates a wide range of proteins.