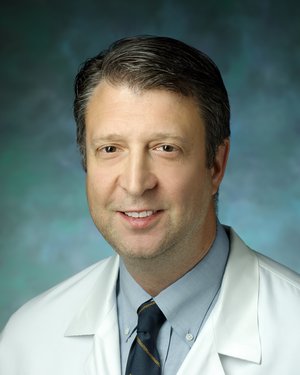 Mediators Of Inflammation In Sepsis And Post-Traumatic Injury; Role Of Statins In Inflammation And Sepsis Including Outcomes Following Injury; Treatment of Penetrating Abdominal Trauma; Effect of Violence Intensity on Patterns of Trauma Rescidivism And Mortality In The Urban Setting ...read more

David T. Efron, MD, FACS holds appointments in both the Johns Hopkins School of Medicine and the School of Nursing. He is the Director of Trauma and Chief of the Acute Care Surgery in the Department of Surgery at The Johns Hopkins Hospital. He is also the Medical Director of the Parenteral and Enteral Nutritional Support Service.

Dr. Efron completed his Surgery residency training at the Johns Hopkins School of Medicine from July 1994 to June 2002. From July 2002 to June 2003, Dr. Efron functioned as an Assistant Chief of Service at the Johns Hopkins Hospital and received a certificate in Advanced Specialty Training in Gastrointestinal Surgery under the tutelage of Dr. John L. Cameron. In July 2003, Dr. Efron continued his training with a year as a Surgical Critical Care fellow at the Johns Hopkins Hospital. He is certified by the American Board of Surgery in both the fields of Surgery and Surgical Critical Care.

In July 2004 Dr. Efron accepted an appointment to the faculty of the Department of Surgery at Johns Hopkins as an Assistant Professor. He is centered within the Division of Trauma and Critical Care, the bulk of his practice consisting of the treatment of traumatic injuries as well as acute care general surgery. He attends 8 to 10 weeks per year in the both the Surgical and Weinberg Intensive Care Units as part of the Critical Care Attending staff. In January 2008, Dr. Efron was appointed the Director of Trauma and Chief of the Division of Trauma and Surgical Critical Care in The Johns Hopkins Hospital Department of Surgery.

During his residency he spent three years in the laboratory of his mentor Dr. Adrian Barbul funded by a National Institutes of Health Gastrointestinal Surgery Training Grant. He examined the role that nitric oxide production plays in intestinal anastomotic healing in addition to examining various other aspects of cutaneous healing and the importance of the route of nutrition to healing wounds. He has presented his results at number of national meetings including the Association for Academic Surgery, the Society of University Surgeons and the Society for the Surgery of the Alimentary Tract. Dr. Efron's current research interests have expanded to the realm of regulation of inflammatory mediators of septic and post-injury states. He is particularly focused in his laboratory on the role that statins may play in this milieu especially with regard to potential translational research from the bench to the bedside. He received both a Johns Hopkins Department of Surgery Research Pilot Project Grant and the 2005-2006 Junior Faculty Fellowship from the Surgical Infection Society Foundation for Research and Education in support of this work.

Dr. Efron carries additional interest in traumatic injury from interpersonal violence, measures of violence intensity, and trauma recidivism with an eye to prevention strategies. This work has resulted in recent presentations at national venues such as the Eastern Association for the Surgery of Trauma and the Pacific Coast Surgical Association with subsequent publication.

Dr. Efron serves on a number of committees at all levels of participation. He is a member of the Performance Improvement Committee for the Adult Trauma Service, and a member of the Department of Surgery Committee for Faculty Retention. He is the Department of Surgery representative to the Medical School Council and is the Chair of the Vascular Access Device Oversight Committee for the hospital. He has served as an assistant chair of the Central Line Task Force appointed by the Johns Hopkins Hospital.