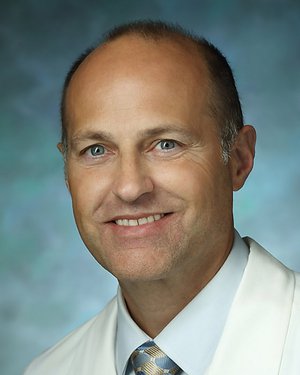 David Rini is an associate professor at the Johns Hopkins University School of Medicine in the Department of Art of Applied to Medicine and the Cellular and Molecular Medicine graduate program. He is a certified medical illustrator.

Professor Rini earned his M.F.A. degree in medical and scientific illustrations from the University of Michigan in 1989. Prior to coming to Johns Hopkins in 1993, he established and directed the Department of Neurosurgical Illustration at the Mayfield Neurological Institute in Cincinnati, Ohio, where he oversaw the production of the first of two volumes of the Atlas of Operative Microneurosurgery.

Professor Rini's main area of interest in his work and teaching is the artful blend of traditional fine art techniques with new technology.

Professor Rini's work often combines traditional media, such as graphite on paper, carbon dust, and pen and ink, with 2D and 3D computer applications, including Adobe Photoshop, Adobe Illustrator, 3ds Max, Corel Painter, Rhino 3D, Vray, InDesign, and Cinema 4D. He served two terms on the board of trustees of the Vesalius Trust Foundation. He is a former chair of the Board of Governors of the Association of Medical Illustrators (AMI) and was inducted as a fellow of the AMI in 2001.

Professor Rini's artwork has appeared in more than 150 books and publications and is on permanent exhibit in several museums. In addition to his work as a medical and biological illustrator, Professor Rini is an accomplished portrait artist. His highly detailed portraits, rendered in graphite and oil paint, are on display in many public and private collections, including John Hopkins University.

Department of Art as Applied to Medicine