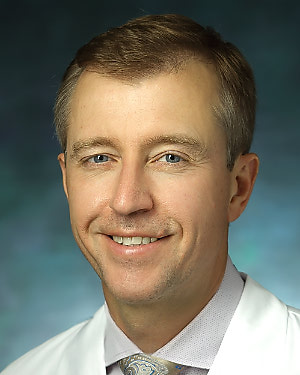 Yuri Prykupenko, M.D., is a board-certified gynecologist with Johns Hopkins Community Physicians. With years of experience in both private and academic practice, he is highly skilled and specializes in the diagnosis and treatment of abnormal uterine bleeding and minimally invasive surgery. Dr. Prykupenko is a Fellow of the American College of Obstetrics and Gynecology and a member of the American Association of Gynecologic Laparoscopists. He has received many awards for his academic and clinical accomplishments.

Born and raised in Lviv, Ukraine, Dr. Prykupenko graduated from Lviv State Medical University in 1996, where he was a research fellow in the Department of General Surgery. After coming to the United States, he completed his residency in obstetrics and gynecology in 2004 at the Sisters of Charity Hospital of the State University of New York Buffalo School of Medicine and Biomedical Science. Dr. Prykupenko practiced gynecology at the Georgetown University Hospital and trained gynecology residents and medical students for more than three years. Afterwards, he opened his own private practice in 2010, right here in the Greater Washington area.

Dr. Prykupenko is happily married and enjoys spending his free time with his wife and children. He also enjoys reading, playing tennis, basketball and water sports. Dr. Prykupenko is fluent in English, Polish, Ukrainian and Russian, as well as medical Spanish. He and his family frequently travel to Ukraine to visit family.