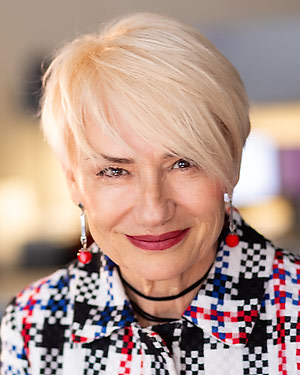 Dr. Trayanova is the Murray B Sachs Professor in the Department of Biomedical Engineering at Johns Hopkins University and a Professor of Medicine at the Johns Hopkins School of Medicine. She directs the Alliance for Cardiovascular Diagnostic and Treatment Innovation, a research institute with faculty from Medicine, Biomedical Engineering, Radiology, and Applied Math, aimed at applying predictive data-driven approaches, computational modeling, and innovations in cardiac imaging to the diagnosis and treatment of cardiovascular disease. She is also a member of the Institute for Computational Medicine and leads the Computational Cardiology Laboratory. She is the first female faculty to hold an endowed professorship in the Whiting School of Engineering at Johns Hopkins University.

Dr. Trayanova’s numerous scholarly accomplishments have impacted the field of computational medicine and biomedical engineering in general. She is the primary innovator and trailblazer in the use of modern computation and modeling approaches in cardiac arrhythmia research and in the diagnosis and treatment of patients with heart rhythm disorders. The focus of her research is on computational cardiac electrophysiology and cardiology, with emphasis on cardiac arrhythmias and pumping dysfunction, and on novel anti-arrhythmia therapeutic methodologies. Her translational research has laid the foundation for novel technological developments, enabling the construction of clinical-imaging -based models of human hearts that realistically represent the functioning of the diseased organ. Using a personalized simulation approach, Dr. Trayanova has developed new methods for predicting risk of cardiac arrest and improving the accuracy of atrial and ventricular catheter ablation therapies. Through her first-of-their-kind personalized virtual hearts, she is pioneering advances in personalized medicine for patients with cardiovascular disease, which promise to profoundly influence clinical decision-making and the delivery of patient care. She is currently conducting FDA-approved clinical trial in simulation-driven treatment for cardiac arrhythmias.

Dr. Trayanova has published over 380 scientific papers, many of them in journals of high impact. She has also given over 300 invited talks, keynotes, and plenary lectures. Her work has received world-wide recognition, and she is the recipient of numerous honors and awards. For her groundbreaking work in computational cardiology, in 2013, she received the NIH Director’s Pioneer Award, the most prestigious recognition of innovation in NIH research. In 2019, she was inducted in the Women of Technology International Hall of Fame, an extraordinary honor conferred only on 5 women each year from around the world. Also in 2019, she received the Distinguished Scientist Award from Heart Rhythm Society.

In 2020, she was elected Fellow of the National Academy of Inventors, and received the Douglas Zipes Lectureship Award, bestowed jointly by the Heart Rhythm Society and the Cardiac Electrophysiology Society.

Dr. Trayanova is also a Fellow of: European Society of Cardiology, American Institute for Medical and Biological Engineering; Heart Rhythm Society; American Heart Association; Biomedical Engineering Society; and International Academy of Medical and Biological Engineering. She is on the editorial board of a number of scientific journals, and is currently an Associate Editor of the Heart Rhythm Journal. Her research and translational work has been funded by NIH, NSF, AHA, DOD, and other entities.

Dr. Trayanova is an inventor on forty-three (43) patents and patent applications filed world-wide, which offer new technologies for predicting risk of sudden cardiac death for patients with various cardiac diseases and for guiding treatment of heart rhythm disorders. Trayanova’s innovations draw commercial interest from startups and strategic companies. She is the founder and chief scientific officer of Cardiosolv Ablation Technologies, a startup company that develops computational strategies to improve the treatment of ventricular tachycardia, a life-threatening arrhythmia. She has received support from TEDCO’s MII Innovation Commercialization Program. She recently received an IDE approval from the FDA for two clinical studies testing her inventions.

Dr. Trayanova’s work has received widespread media coverage. She has been featured on Reddit AMA r/science, has given a TEDx talk, has been interviewed by the BBC, NPR, the Economist, and has been on the Amazing Things Podcast. Her work has been featured by a number of outlets, such as NBC News, Baltimore Sun, Slate, Huffington Post, and others. Her collaborative work was featured in the New York Times. She has been the subject of a number of YouTube videos and press releases by Johns Hopkins University. In 2017, Trayanova participated in Congressional briefing advocating for the federal funding of scientific research, as the representative of cardiovascular sciences.

Dr. Trayanova’s Computational Cardiology Lab  conducts both basic science and translational studies of heart dysfunction and therapies for heart disease. Currently, the translational research centers on advancements in the clinical therapies of atrial and ventricular ablation, defibrillation, and the risk stratification for arrhythmias using a personalized imaging-based “virtual-heart” simulation approach. The basic science research focuses on understanding the pathological electrophysiological and electromechanical behavior of the heart, with emphasis on the mechanisms for cardiac arrhythmogenesis and pump dysfunction. Research in Dr. Trayanova’s laboratory is supported by grants from NIH, NSF, and the American Heart Association. Visit the lab website.

Researchers Looking to Help Those with Heart Arrhythmia

This Engineer Can Design Your Virtual Heart