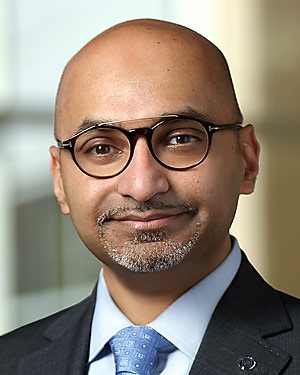 Mohammed Shafeeq Ahmed, MD, MBA, FACOG, is the president of Howard County General Hospital: A Member of Johns Hopkins Medicine (HCGH). Ahmed is responsible for the overall operation and direction of the hospital.

Ahmed joined the hospital as chief medical officer/vice president of Medical Affairs in July 2016. In this role, he served as the hospital's designated medical safety and quality officer, and led HCGH in integrating services and quality care standards with those of Johns Hopkins Medicine. He provided administrative oversight for professional staff activities.

Ahmed has served as chief operating officer/chief medical officer of Baystate Health’s Eastern Region in Springfield, Massachusetts and several other positions in the Baystate Health system, including chief operating officer/chief medical officer at Baystate Mary Lane Hospital and regional medical director for Baystate Medical Practices. Before joining Baystate, Ahmed was a lieutenant commander in the U.S. Naval Medical Corps and served as an attending obstetrician/gynecologist at the Naval Hospital – Cherry Point, North Carolina, where he was also the president of the medical staff and chief of obstetrics/gynecology.

Ahmed received his medical and bachelor’s degrees from Boston University, followed by a residency in obstetrics and gynecology at Baystate Medical Center. He later completed a health care leader fellowship at the Massachusetts Healthcare Leadership College. Additionally, Ahmed holds a Master of Business Administration degree from the Isenberg School of Business at the University of Massachusetts – Amherst. Ahmed is a board-certified fellow of the American Congress of Obstetricians and Gynecologists. In 2014, 2016, 2017 and 2018, Becker’s Hospital Review named Ahmed one of the “100 Hospital and Health System Chief Medical Officers to Know.”