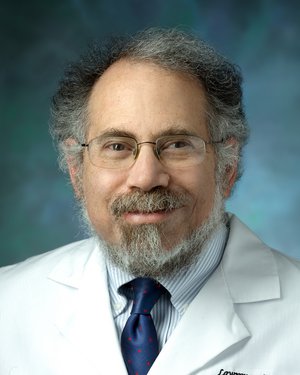 Dr. Lawrence Nogee is a professor of pediatrics at the Johns Hopkins University School of Medicine. His area of clinical expertise is neonatology, with a particular focus on genetic surfactant dysfunction disorders and neonatal lung disease.

Dr. Nogee received his medical degree at the Johns Hopkins University School of Medicine in 1981. He went on to complete a residency in pediatrics in 1984, also at Johns Hopkins.

His research focuses on genetic causes of neonatal lung disease and childhood interstitial lung disease (chILD), a group of poorly understood illnesses that cause chronic breathing problems in children, often starting in infancy and leading to progressive lung damage.

Dr. Nogee has over 100 publications in peer-reviewed journals. He holds certifications in neonatal and perinatal medicine and in pediatrics from the American Board of Pediatrics.

Lawrence Nogee’s clinical and research interests are in lung diseases in newborns as well as older children, with a particular focus on genetic lung diseases. His laboratory research focuses on identifying genetic mechanisms leading to neonatal respiratory failure and diffuse and interstitial lung diseases in older infants and children. This includes understanding the biology, molecular epidemiology and pathophysiology of lung diseases due to genetic surfactant dysfunction through molecular and genetic analyses of samples from individuals with these rare lung disorders.

In addition, his laboratory actively seeks to identify novel genetic causes of childhood interstitial lung disorders, determine the role of genetic variants in surfactant-related genes in contributing to more common neonatal lung diseases, and use the study of these disorders to improve our understanding of normal surfactant metabolism. Long-term goals include translating basic science findings into improved diagnostic tests for rare neonatal and diffuse lung disease, and developing more effective therapies for these disorders, and he is part of a multicenter collaboration to develop specific therapy for ABCA3 deficiency, the most common cause of genetic surfactant dysfunction.

Dr. Nogee is an active participant in the Children’s Interstitial Lung Disease Research Network (ChILDRN) and part of the Johns Hopkins Center for Pulmonary Hypertension and Congenital Diaphragmatic Hernia working groups, is a site co-investigator on a multicenter trial of treprostinil as add-on therapy for persistent pulmonary hypertension of the newborn, and a co-investigator on the NIH-funded trial evaluating serial amnioinfusions to rescue the lethal pulmonary hypoplasia associated with early-onset anhydramnios (PI: Eric Jelin, general pediatric surgery).